Well, it wasn't enough to finally find a moose...Sparky now needs to find a BULL moose. (Oh, good grief! says E.) ..and some elk goin' at it so she can hear some more elk bugling! THAT was really cool to hear the other night! So off we go, headed towards the Grand Teton National Park.

On our way to Teton Pass, (8400 feet with switchbacks and 20 mph. curves) which we have to go over every time we want to go to the park, Sparky saw something out of the corner of her eye--it looked like a ton of cement sacks off on the roadside stacked up, but they were doing what looked like "The Wave!"   HUNH?   "STOP THE CAR!" comes the command...Actually, it wasn't a command, Sparky said, "OH, MY GOSH! I think there's something going on over there, it looks like cement bags, but they are moving! Let's go check it out!" And Eldy is so agreeable to that, he's retired, he's got nothing better to do than drive Sparky around so she can get her photos, so we did a 360 turn (a safe one!) and back we went. We parked at the entrance to a campground road, and what do we see, but a TON of sheep coming down the hillside with two cowboys on horseback pushing them downwards towards us. It was comical to watch the sheep...They came cascading down the hillside, at a little trot and then a walk, and when they got to the bottom, they stopped and just milled around.

They didn't know where they were supposed to go next. They stopped and looked at us, like looking to us for directions. Then they proceeded to mill around in circles till the cowboys and some extra ranch hands starting pushing them towards the parking lot where we were sitting in the car. We didn't know it, but 2500 (!) sheep were about to be herded out the exit driveway, ACROSS the busy highway, and into the next field. We had to get out of the way!

There is no leader in a herd of sheep, they all follow the one next to each other, hence all the quotations about sheep and their lack of sense of direction (!), people acting like sheep, etc., etc. The sheep herding dogs were fun to watch. The dogs bite the sheep in the butts to get them to go where they want them to go. It was kind of like watching a revolving door full of sheep, watching them move. They moved in gradually widening circles,  then the cowboys on horses and ranch hands on foot smack branches on the ground while the dogs work the herd to move them ever forwards in this revolving circle.  We saw the owner standing off by himself waiting for his ranch hands to get the sheep moving towards the highway and overseeing the whole procedure.  Eldy and I talked to him for a few minutes, and we asked him, incredulously, "You mean you are going to take these sheep across the highway????" (watching the semis and cars roll by)..."How are you going to get them to stop?" And he says with absolute certainty, "Oh, they'll stop." I will say the semis weren't rolling very fast as they were approaching the high Teton Pass. With their branches smacking the ground and the help of the sheep herding dogs, the farm hands pushed the sheep in the direction of the highway. Once the truckers saw the herd starting to cross, they came to a stop, traffic backed up in both directions and people came pouring out of their cars to get photos.  Here's how it went.....and rather smoothly at that...It was an amazing to see! 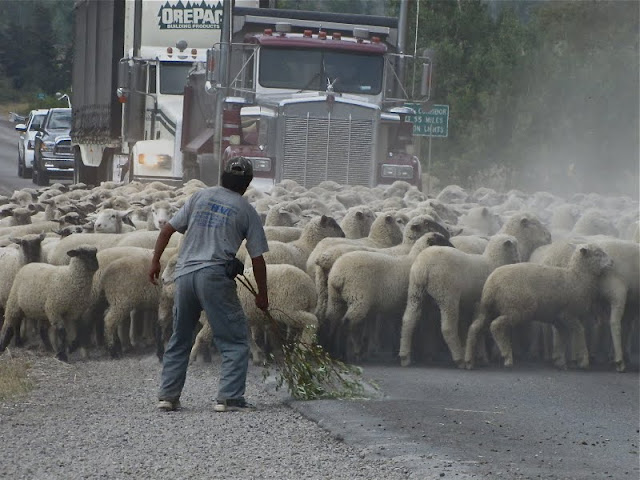 And 2500 sheep passed across the highway without a mishap......The things you see when you travel!

To the park, onward, Eldy! We went to the park yesterday to look for moose AND to do a 2.7mile hike in the Jedediah Smith Wilderness. And yes, we got our ranger maps first....The road back to the hike was ridiculous! A ten mile drive back into the forest with potholes after pothole, big rocks, washed out areas, but it is one of the hikes recommended on a big list the ranger gave us, and one of the more popular ones at that, so we kept driving. We found out later, that road conditions sounded about normal to the ranger we talked to after the hike. Anyway, we came to the unmarked parking lot and there was the trail. It started out pretty enough with a creek running along the trail. The creek was loaded with butterflies.. The trail was loaded with horse poop and flies! I guess most of the trails in this wilderness are shared with horses, but the smell and the flies were a big turn off to us on this particular hike. That's one reason we didn't go to the end of the hike.
The end of the hike has a large wind cave, but we didn't find that out until AFTER we came back down. Supposedly, there are waterfalls along the way. We didn't see a single one, maybe they were all dried out. The trail description says "easy hike" so we thought we'd try it.  HA! Not so easy, good ascent all the way....We got our hearts a pumpin'--(the hike was at about an 8,000 foot elevation)..but it was BORING! Scrub brush, dead pines, brambles along both sides crowding the narrow path, nothing really interesting geologically speaking, no birds visible, no cool rock formations, no water. Ah, we missed the wind cave! That was probably interesting, but we didn't enjoy the hike after about 1 1/2 miles of the same landscape, so back down the hillside we came. The coolest part of the hike was all the butterflies flitting about the stream at the beginning....
A little disappointed in our hike for the day, we headed back to Grand Teton National Park to head towards the Moose-Wilson Road to look for moose again....no luck! On the way back from Moose-Wilson Road, we looked for our elk friends again just south of Teton Village. No luck there, either! The bull elk has maybe chased the females into the woods? Maybe he didn't like the audience he's had the last two nights at the field!

It was still a beautiful drive back home......We think we are going on a bike ride on a beautiful bike trail over by Teton Village tomorrow.....The trail says watch for moose along that bike path..great! MAYBE we'll see one, but it's doubtful. The trail passes by residential areas. You wonder sometimes how old those "watch for wildlife" signs are...maybe it's been years and they were put up before developers showed up! At any rate, we'll let you know what we do tomorrow like we always do! Thanks for reading us today.....   Sparky and Eldo
Posted by Jeannie and Eldy at 11:26 PM