Where the heck is Tetonia? (population 200+) Why, it's in Idaho on the border right here where we are staying! Here's a map... 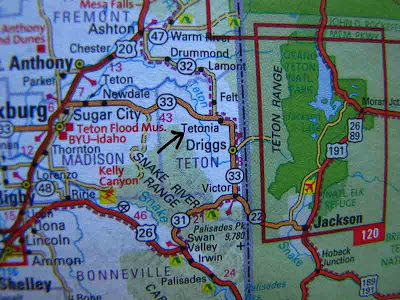 You can see why Eldy picked the RV park in Tetonia as it is relatively close to the Grand Teton National Park. You just have to know that to get to the park involves going over the Teton Pass. It seems to be the only way to get there from this direction.

We were very well treated by the office staff at Mountain View Lodge and RV Resort where we stayed..they gave us the Passport America discount for the entire six days we were here, first we got it for the first three days, then they extended it thru the weekend for us as well. Very nice and friendly staff....the wi-fi is really fast, but that depends where you are in the park of course, or how close you are to the tower, or how many people are using it, I suppose. The Verizon air card worked fine, but again, that depended where we were using it in the park.  Much of the time it was slower than molasses!

Although they are lacking in shade, the Mountain View Resort and RV Park really was a great place to stay for our time here, while we were exploring Grand Teton National Park. This park also has a motel for travelers besides the RV Park, and the RV park is open all year, a rarity in this part of the country. Sites are level and gravel. Six days for about 93.00--terrific! Several complaints--the sewer connect is high up off the ground, making your hose have to go uphill to dump.  Another concern that might bother some is that the sites have shared pedestals so each site alternates direction with the pull ins--if you had a neighbor, their slides would be VERY close to yours, closer than if each site had its individual pedestal for electric. This park seems to be run much more informally, there were people sleeping in their cars off site several nights. Dogs ran loose and pooped wherever they felt like it. There was supposed to be a tent camping area but several people didn't use it.  There were hunters who slept in their trucks as well.

The "activity" building houses a nice laundromat, a nice "living room" for people to gather and there are a couple of game machines and a treadmill in there. All that being said, it's a nice facility for the money we paid. The owners  are extremely nice...we would definitely stay here again despite the negatives. 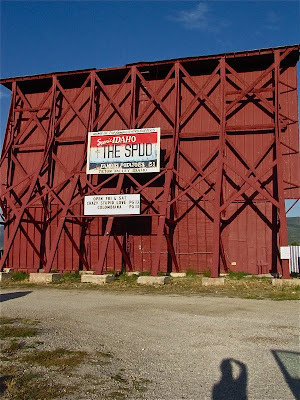 We really like our location even though it's about 40 miles from the park. It's an enjoyable drive in, except for the current road construction that causes some significant delays on your way to Grand Teton National Park. You pass really cute little towns like Driggs, and Victor...These are growing little towns..nice houses and subdivisions are springing up along the highway, and there are some great little restaurants of varying ethnicities like Thai and Mexican in the towns of Victor and Driggs....There's even a little restaurant here in Tetonia that has excellent food--The North End Bar and Grill. There's a terrific, huge grocery store in Driggs, (population 1439) called Broulims that has all kinds of specialty items and great food selection, although a little on the pricey side. Between Driggs and Victor is a drive in movie theater that's still operating! 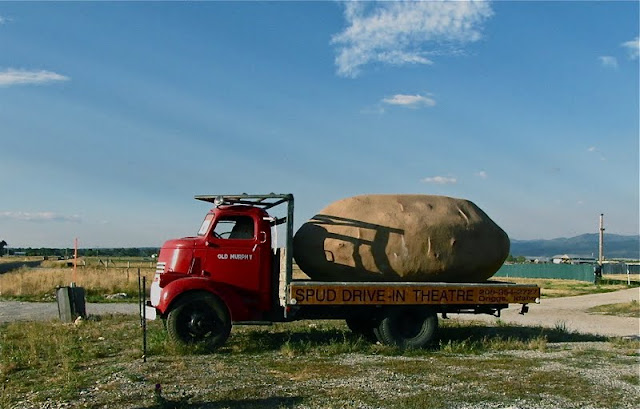 We've really enjoyed our stay here in the Grand Tetons area...Jackson Hole is a very cool town. We didn't sample very many restaurants, but I'm sure there are many good ones. The only one we tried was the Tavern on the Square Bar and Grill and it was great! The national park itself was wonderful, the view of the Teton Range is fantastic. We actually liked the surrounding area outside the park better than the park...The park is so wide open unless you are venturing into the mountains to hike and about all you see is sagebrush meadows with the mountains as a backdrop....We didn't get to see much wildlife other than one moose and lots of elk who showed up for about two days in a meadow and then left town. We'll definitely come back to the area to see more of this beautiful area.....

We are leaving the park tomorrow for points east of here. We've decided NOT to tow the car over Teton Pass. It's enough of a drive to get the motorhome over the 8400+ foot pass. Eldy is working out the drive back to Indiana. We are going to boondock a lot on the way home to save money. Flying J here we come!
Posted by Jeannie and Eldy at 11:50 PM