It's football weekend....and it's Notre Dame football...Eldy's favorite team has switched to a channel called Versus, so Eldy can no longer watch as we don't have satellite or cable in the motorhome. BUT---the clubhouse has ESPN, so guess where Eldy plunked himself down for the afternoon to watch LOTS of football? Sparky decided to check out the Jackson Hole bike trail down by Teton Village while Eldy watched football. Eldy has had VERY little TV lately at the last few campgrounds so he's a very happy camper, and a very deserving one....
I drove myself over the pass--no sheep around today (see "Sheep Jam" blog) and it gets a little easier each time you do it....With a 4 cylinder engine, you can really hear that baby whine, which makes me fret that the car is overworking itself...but the Honda CRV does just fine, you just gotta floor it to keep it going, (not really, but it's a hard push on the gas pedal all the same)...all the way down 20 m.p.h. curves down to the Teton Village Transit Center where you can park your car in the vicinity of the transit area. Then take off on a beautiful bike ride of about 6 miles one way if you go to Teton Village, which I did...One of the first things you see on the trail is this sign: 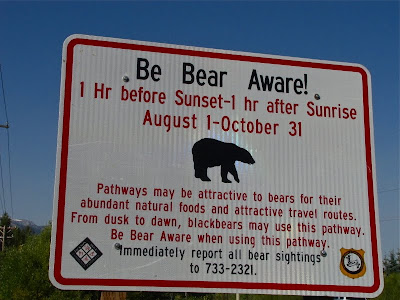 No worries, mate! There's lots of residential development around, a golf course, a boutique shopping mall, and fields across the street and it was middle of the afternoon, so I wasn't worried. There are so many "BE BEAR AWARE" signs around, it's a wonder that you don't see any bears. We haven't seen them in the national parks, we haven't seen them in the national forests, and I sure didn't see any on the bike trail today. That doesn't mean they aren't around, I know, I know.... 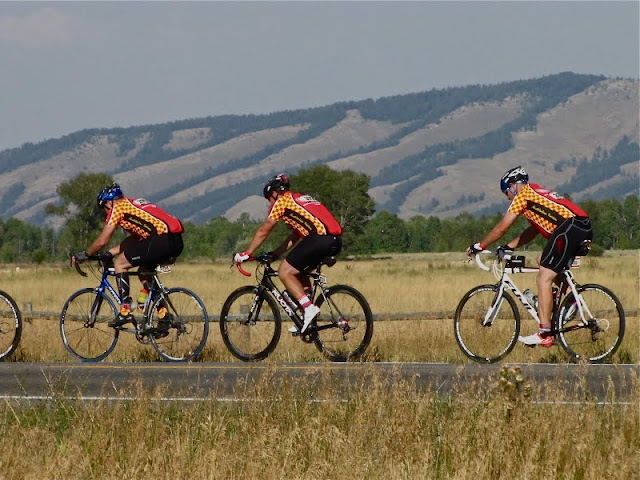 There was a big bike race today and so the highway going into Jackson Hole was clogged with cars and and "sag wagons" (the extra bikes/parts/supply vans that follow the race and the riders). It was interesting to see the pace--I was going about 14 m.p.h. on the bike path and they were zipping by twice as fast in their colorful racing bike outfits and expensive bikes. Some of them had colorful matching shoes to match their outfits. Too chic!  Some were in teams, some were in tandems, and some were struggling behind the pack. Not sure how long the bike race was, but it was still cool to see so many participating! 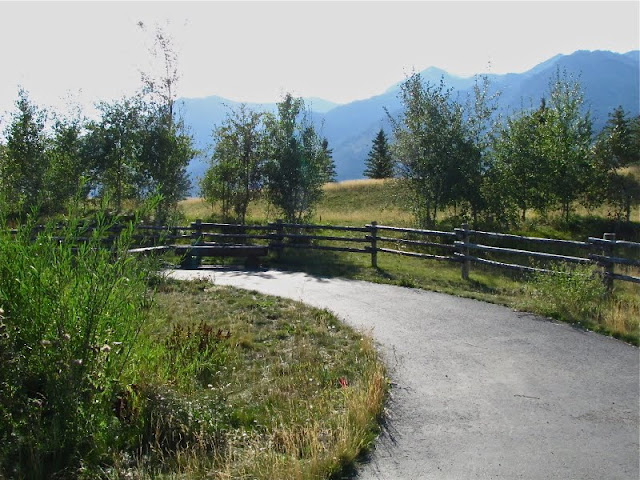 I did 12 miles round trip today, and it felt great! Nice path, highly recommend it--paved all the way, and I'm sure it continued well beyond Teton Village. There are miles and miles of paved bike/hiking paths in the Grand Teton National Park, and they are building more, but they are just about all in the open. I really enjoyed the bike path along the Teton range today because it was shady, it passed by fields and forests, and there were little brooks and beautful rest stops along the way to sit and admire God's handiwork.... I think Eldy should see this bike path and try it out tomorrow, it's gorgeous and rather flat, not hard at all!...(Oh, boy, I knew I was going to get into trouble for watching football all afternoon! laments E.) 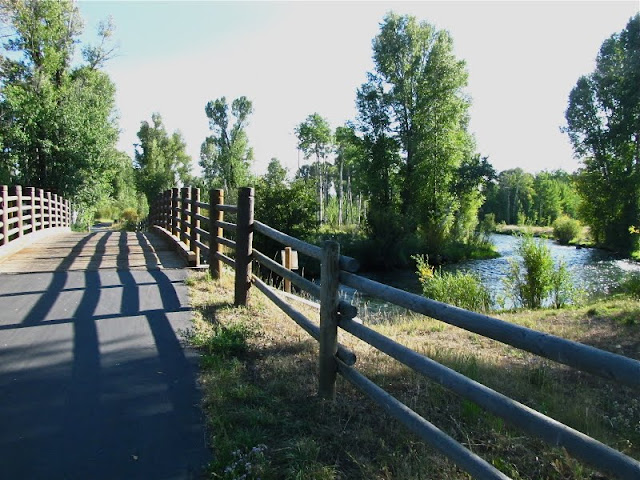 You can see all kinds of things on this trail...maybe wildlife, maybe not! Maybe interesting things to look at?--you bet! How about this garage mural? 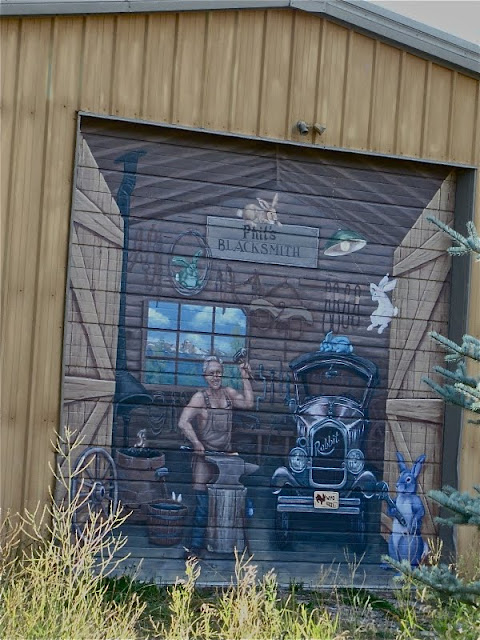 Great ride today, fantastic view of the Tetons....Hopefully, Eldo will get to see the trail, too! (He's off watching the close score and the last few minutes of the Notre Dame game or he'd have a comment, lol!) He's a good sport, I bet I can get him out on the trail with a reward at the end...like a Kokanee beer at the local tavern in downtown Jackson Hole)....See you later!   Sparky and Eldo
Posted by Jeannie and Eldy at 11:20 PM