Pretty hard to top our first day, eh? (see previous blog posting) And we don't think we can but we'll try....First, did we see any wildlife our second day out? Yep! Solitary bull bison in quite a few different places...apparently, the mating season is about over, the bulls have separated themselves from the herd, and gone off by themselves. We saw at least three in different locations in the park, totally alone..Sparky will resist from saying, "Just like a man, love 'em and leave 'em" because that might start a "firestorm" of comments from the guys, so she won't....(Notice how she slipped that in anyway, says E. Who does she think she's foolin'?) NOBODY! Just teasin'......You guys are great, we'd be lost without you! (And Sparky would REALLY be lost, because she can't find her way out of a paper bag! emphasizes E.) True, true, sad, but true....

What did we see besides the lone bison? More cool hydrothermal features, like Roaring Mountain..You can hear this mountain hiss. Heat loving bacteria are slowly eating away this mountain. How can this be possible? Here's the explanation which we thought was interesting! (Sparky didn't want to have to spell the name of that bacteria, laughs E.) 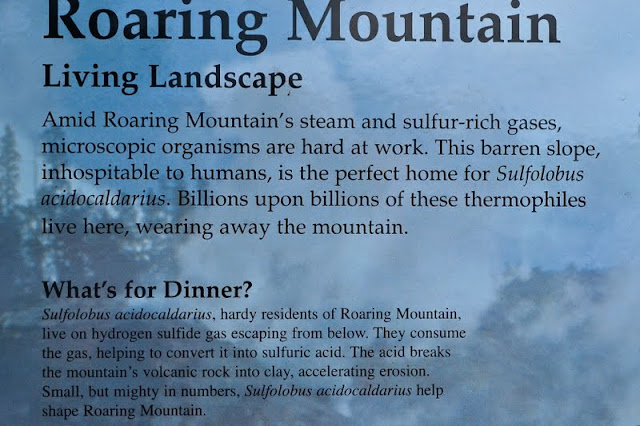 And here's Roaring Mountain, having a hissy fit! 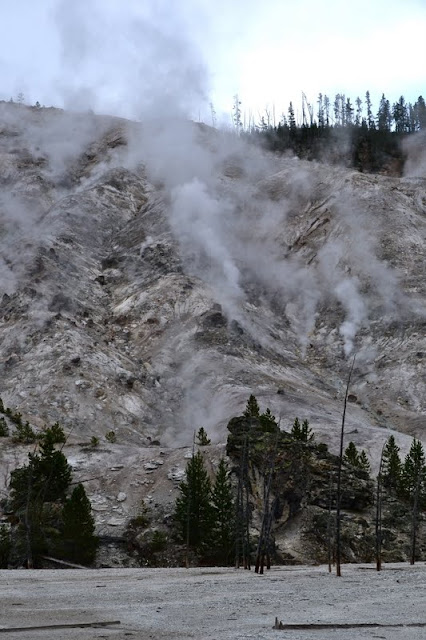 The loop drive we took today was from the west entrance into the park to the four way stop, then left towards Mammoth Hot Springs, a northern route through the park versus the southern route (Old Faithful) that we took on Day 1 in the park.

We passed through the Norris Geyser Basin first.... Norris is one of the most active earthquake areas in the park. It is also one of the most acidic hydrothermal areas in Yellowstone. Many acidic geysers, which are rare in the rest of the world are here. (There are over 10,000 geysers in the park, and only six of them are predictable.)  Steamboat Geyser is the tallest active geyser in the world!  The last eruption of Steamboat was in 2005, and the roar was so loud, you could hear it miles away.  When it erupts, it shoots about 300 feet in the air as opposed to Old Faithful at about a hundred feet. WOW! There was a ranger giving a talk, and he said that there is a ton of silica in its eruptions, the wind would spray the cars in the parking lot with a layer of silica when it erupted.  Guess that would be sort of like acid rain coming down on your car, a lot at once. Good luck getting that stuff off your car! (Silica is inside those small little paper packets they put inside anything to keep moisture from getting into stuff.) We saw Steamboat periodically steaming and hissing a bit, there was some kind of thermal disturbance going on, but nothing imminent. Every time it spouted, there was an audible "Ooo-o-o-oh!" from the small crowd gathered.

Temperatures of the pools and geysers are above 200 degrees here, and you could feel the heat even though air temps were in the low sixties the day we went. Every year springs, geysers and basins change at Norris. It's one of the most unpredictable areas in the park. What you see one year might not be there the next. The chemistry of the water underground is always changing, causing changes in colors and water on top of the ground. 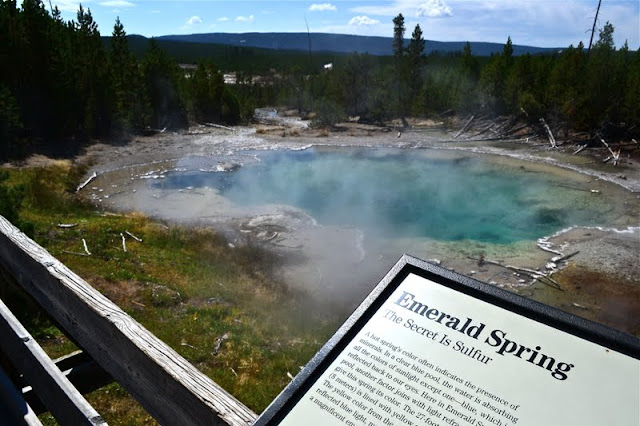 There's a lot of bacteria and viruses in the park's hydrothermal features, that's what causes the many different colors in the water runoff and the water surrounding the pools. There are signs that say, "TOXIC GASES exist in Yellowstone. Dangerous levels of hydrogen sulfide and carbon dioxide have been measured in some hydrothermal areas. If you feel sick, leave the area immediately." Scary stuff, but guess they have to warn you. We didn't feel any adverse effects and people have been coming to Yellowstone for many many years, but it does make you stop and wonder as you gaze down into the pools loaded with bacteria! Some areas were VERY stinky, others not so much! Nothing worse than remembering the odors in chemistry lab in high school!

I love the names of some of these geysers...Palpitator Spring, Porkchop Geyser, Whirligig Geyser, Puff 'n Stuff Geyser, and more. 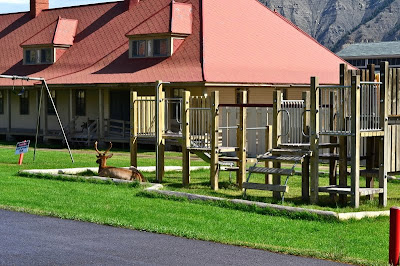 On to Mammoth Hot Springs--a cute little town. This is where the elk supposedly hang out and lounge all over town wherever they feel like it. We did see a few today, they were over at the playground. Guess they decided to have their fun over there....they were young ones, so go figure! The adults were out and about elsewhere. They come back into town later in the day, true for most wildlife, and show up closer to dusk. There were signs on every street corner--"DANGER-WILDLIFE--DO NOT APPROACH THE ELK!" Sparky got out of the car to get a closer elk shot at the playground and a ranger did a reverse backup just to make sure Sparky obeyed the rules. (Word has gotten around about Sparky's bending of the rules when trying to get the "perfect" shot apparently, thinks E.)  I didn't tell him one of our friends said I should just stay in the car. (HA! THAT will never happen! he says). 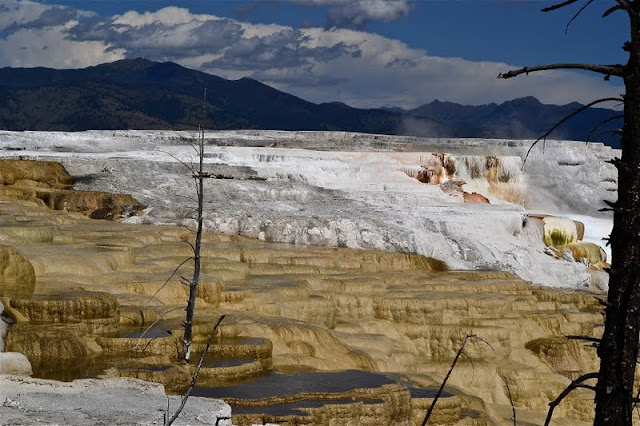 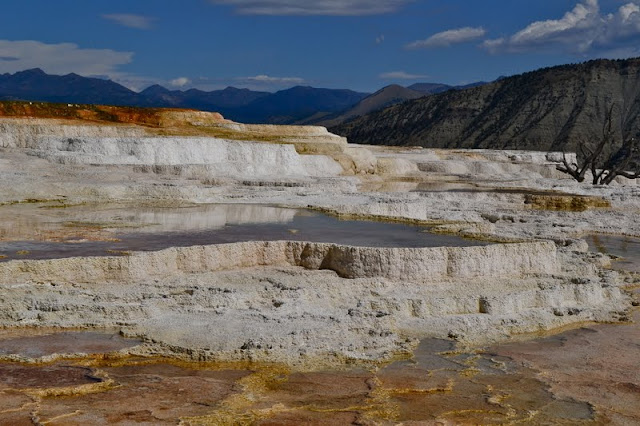 Mammoth Hot Springs has a TON of limestone and lots of springs..Limestone is the main rock in this area as opposed to rhyolite which is in the other areas of the park.  This area is one of the best examples of travertine depositing hot springs. Travertine is a form of limestone rock and at Mammoth Hot Springs, you can see LOTS of travertine terraces. There is also a fort at the town, Fort Yellowstone. You can take a self-guiding tour there. There are many cool formations to see at the terraces, and one of them is Orange Spring Mound. It gets its colors from thermophiles (heat loving bacteria) in the spring waters that slo-o-o-w-ly cascade over the top. It made me think of an orange Dreamsicle when I saw it.