It's been raining two days...nothing new about that in the rain forest, the primeval forests of Washington. But sunny days are coming around the corner and the residents are really excited. We had one sunny day a couple of days ago and the locals went wild. "Did you see that beautiful sunny day we had yesterday? It was WONDERFUL!" That's all they could talk about. They treasure those few and far between sunny days until the rainy season is over, and rightfully so. Which it will be next week because not a drop of rain is scheduled on the Olympic peninsula side of Washington in this area. Not one percentage point of rain all next week. It figures, we will be on the high desert side of the Cascades, going to Leavenworth, to see my brother Charlie, where it's HOT. Time to get acclimated to higher temperatures, Sparky!  Wahhhnnnnnhhhh! (Sparky can be such a whiner when temperatures climb.)

Seriously, folks, there is such a thing as summer seasonal affective disorder. I think I have it. When heat comes, and to me, heat is anything about 75 degrees, and humidity, and that relentless sun beating down on my age spotted skin, I'm grouchy and grumpy and depressed. All I want to do is stay indoors where there's air conditioning and I lose interest in the things I like to do outside. (Oh, brother!...Did I know that? asks E.) Well, last summer we managed to stay well away from the heat, and only till we got to Arizona in February, March and April, did the temps start to threaten to warm up. So Eldy never got to see the real me in hot, hot weather. (groan!) I'm gonna get me an evaporative cooling vest for Sedona, Arizona in mid July. (I'll buy it for you, Sparky, just consider it an early birthday present!) I'm putting words in Eldy's mouth now, I was just kidding, but it's going to be quite an adjustment, for him, too! (Lord, help me! In all ways.... says E.) 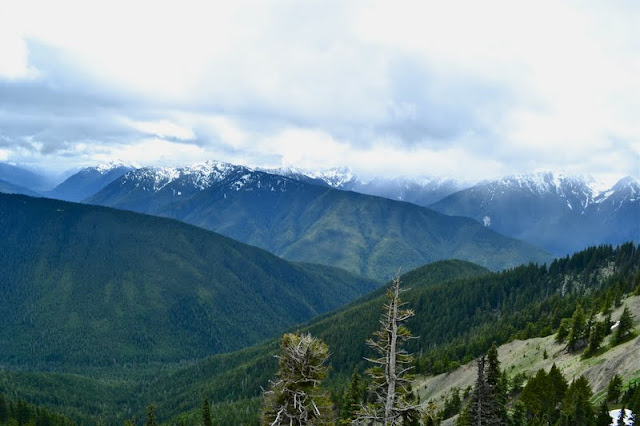 We drove out to  Olympic National Park today, a spectacular (gee, I use that word a lot while traveling through the country), although it was a fog shrouded drive until we got to Hurricane Ridge Visitor's Center. Then the fog cleared briefly to reveal some amazing snow covered mountain ridges right where we were.  We stopped at a view turnouts while climbing the mountain and heard this weird sound at one of them--kind of like a bull frog, but it was too loud for a bull frog. We found out later it was the mating call for a dusky grouse. In case anybody wants to know, there are sooty grouse and dusky grouse, and the names sound like they might not be very pretty birds. We heard them but didn't see them but found out later that's what we were hearing. They puff up their throat areas and make quite a "hrunph, hrunph" sound and that supposedly attracts a mate to them. 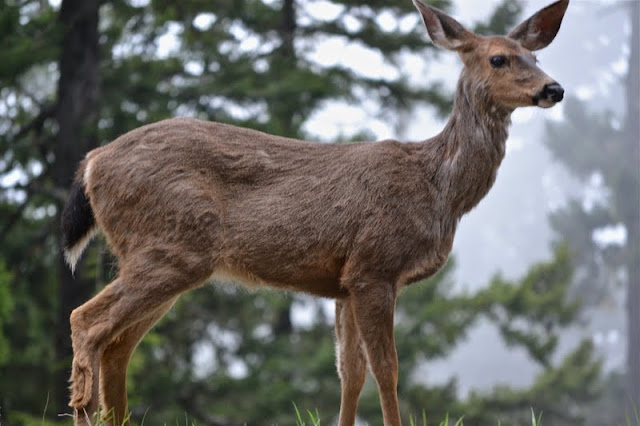 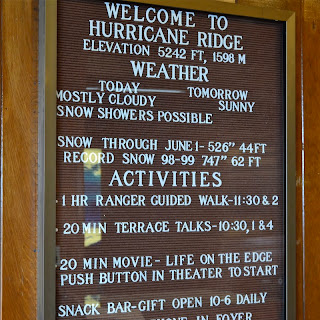 We saw some black tailed deer up close and personal at another turnout. This one seemed to be tame, and walked right up to a car just behind us, as if expecting to be fed. He just stayed in the area right beside the road, ate some grass and waited for some handouts from his adoring public. (That's a no-no in the park, but people don't seem to observe the rules or this guy would have bolted when he saw us.) There are some really nice trails at the Hurricane Ridge area, but most of them are snow covered and hazardous and it's almost July! Once we saw the snowfall average for the year,  and all the snow at 5300 feet where we were, we understood why.

You see the weather for today? "Snow showers possible"  and it was June 30th! Snow accumulation for this year through June 1 is 44 feet of snow...Woo-hoo! Fun for some of us, awful for others. We saw a family with a snow disk on the hillside near the visitor center. They probably don't get to see snow very much. We enjoyed our visit today to the Olympic National Park, but sorry to see no trails were recommended for traversing unless you have serious hiking boots, and snow equipment. It was 43 degrees, and I loved it at the ridge! (Oh, boy...we're going to have problems when she gets to the high desert in Washington and then Arizona...gonna have to stock up on popsicles, or something. Any ideas are welcome! requests Eldy.) 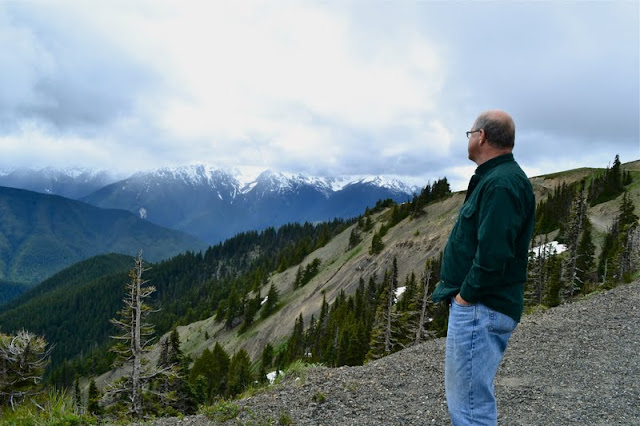 Check out the deer in the meadow.....tiny specks but they are there.... 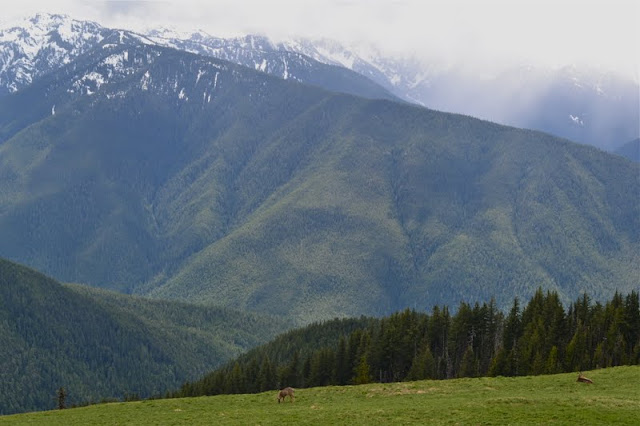 Tomorrow, we're headed to the Hoh rainforest.....It's a bit of a drive, about three hours one way, but how often do you get a chance to see a rainforest? We hope to hike a couple of small trails through some pretty amazing forests and moss covered trees.....see you there!
Posted by Jeannie and Eldy at 11:45 PM