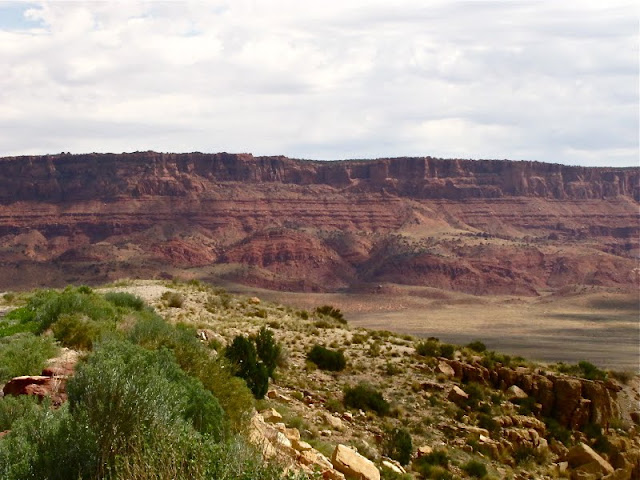 We could have driven Highway 89 as the start of our trip, but we decided to take Highway 89A on the recommendation of a couple of friends as the Kanab Corral RV Park...we are really glad we did! Having never seen the canyons of Arizona before other than flying over them one time, we got to see them up close and personal. Highway 89A is a spectacular drive.....it starts out uneventful with rolling plains, a few low lying mountains in the distance, and then the climb starts....we got to 7,900 + feet, then started coming down into Arizona's canyon lands....WOW! I remember that we started seeing the canyons in the distance, rounded a curve through rock walls and here the views started! They continued to get better and better...from 89, we took highway 40, to highway 17 to Camp Verde, AZ, where we will be for the next three days....All three highways had steep grades, about 6%, but the Phaeton handled them beautifully! (Thanks to my skilled driving, says E. modestly.) He didn't really say that, I'm putting words in his mouth again. I say he's learning how to downshift better and takes these mountains very skillfully. 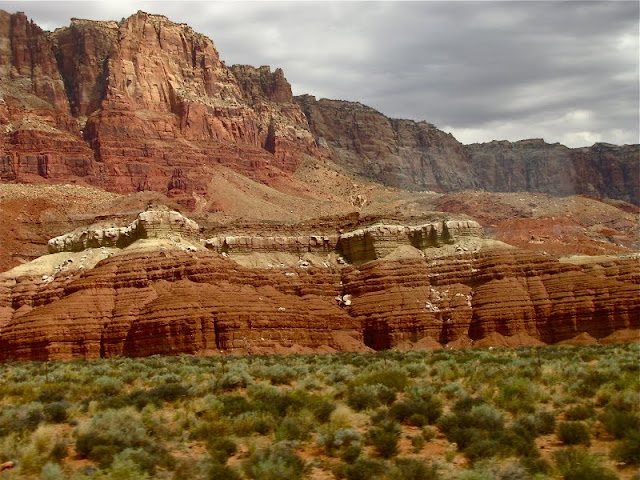 Isn't this something?? We saw all kinds of things today on our drive---this spectacular scenery, signs that said to watch for elk for the next 35 miles, (we didn't see any), we saw a mule deer hop away from the side of the road (whew!), we traveled through desert, then the Kaibob National Forest, climbed heights up to 7900 feet then down, back up to 6500 feet, and then descended into canyons. We saw the Vermillion Cliffs, reddish craggy rocks with incredible boulders at the base. There was a pull off and Navajo tribal members were selling beautiful beaded jewelry, silver jewelry, ornaments and fetishes. I would have loved to spend more time there to learn more about the symbolism of the beautiful pieces, but we had to get going again.....We bought a couple of things for the grandkids and explored a unique set of little houses at the base of the cliffs at this very same spot where we managed to park the Phaeton in and among the boulders....... 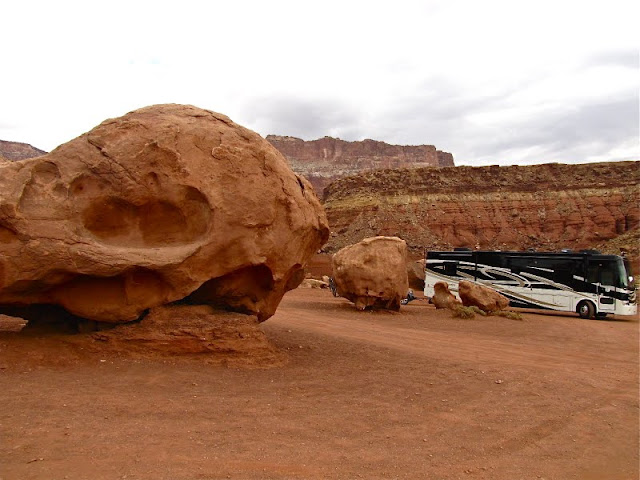 A lady's car broke down back in 1927, and she was forced to spend some time at this site. She liked it so much, she built a little dwelling using the big boulders there. 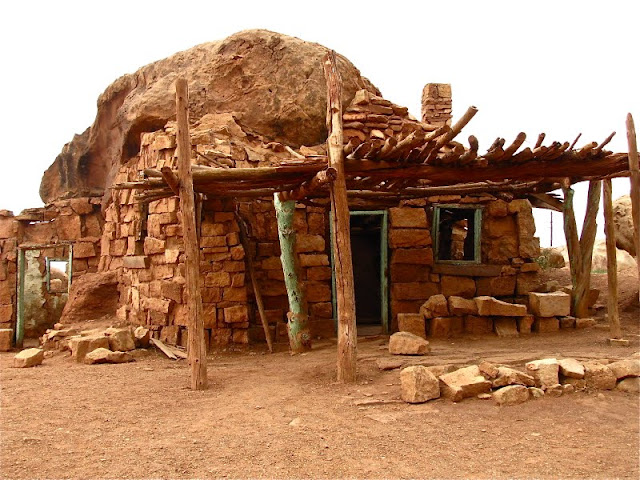 There was nothing said at the site about her husband, so I have a feeling she was a feisty independent spirit who was driving out on the road alone out west, her car broke down and she made the best of a not so good situation and look what she came up with! Back in those days, the gas tanks were gravity fed, so on steep mountains, the gas could not get to the engine, so they went up the steep inclines backwards! Or so the sign said at this site.... 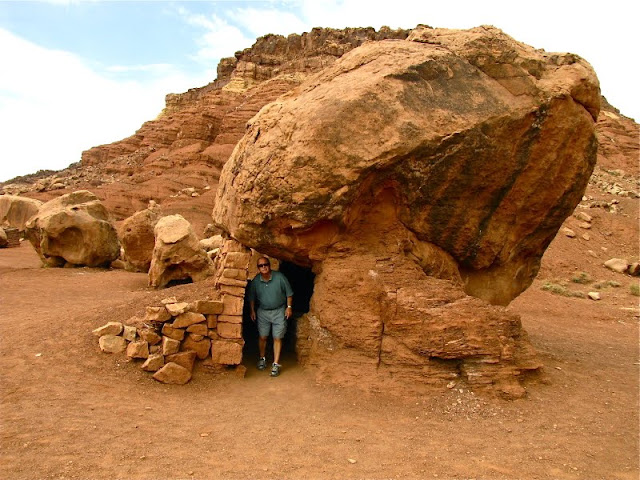 As we passed further on into Arizona, we saw many many native American stands wanting you to stop and buy artwork and jewelry. Most of them were just little shacks set up by the side of the road. The houses and dwellings we passed were in bad shape, it was obvious that the people living in this area were very very poor....We think this was mostly a Navajo area due to signs we saw, and we thought that living in this area must be quite a struggle for them....There was not much traffic on the road, and many of the roadside stands for selling artwork and jewelry appeared to be abandoned. 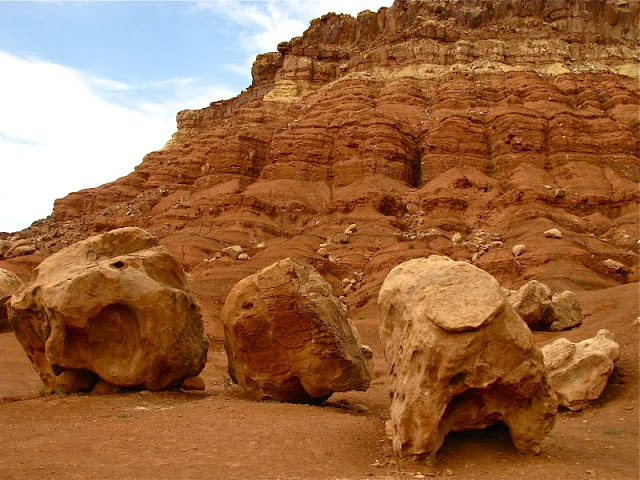 After getting on interstate 40 south, and then interstate 17 south, the landscape changed quite a bit, and we actually felt we weren't in Arizona any more because of the forests and trees that we passed through for awhile, the Kaibob National Forest.  We kept heading south, on the way to Flagstaff, then on down to Camp Verde, a very small town about 20 miles from Sedona. It took us about five hours to cover about 260 miles, but we stopped for that cool canyon roadside Navajo stand, and a couple of other places to get photos. We are at the Distant Drums RV park in Camp Verde, AZ at the price of 18.00 a night for full hookup. Photos tomorrow....nice park, and quite new in appearance....But it's HOT--103 degrees today...(Now, Sparky, you said you weren't going to complain, reminds E.) Yeah, but it's REALLY HOT!!!!!!!  Wa-a-a-an-n-h!

In the next two days, we're going to be getting ourselves ready for family who start coming to town on Wednesday this coming week. Gotta get the rig cleaned up, and room made in the car for carrying a third person around town! But first, we'll see you in Sedona tomorrow for Sparky's 61st birthday! Whoopee! I LOVE birthdays!  (Not me! says E.)
Posted by Jeannie and Eldy at 11:50 PM

Email ThisBlogThis!Share to TwitterShare to FacebookShare to Pinterest
Labels: Highway 89A and travel to Camp Verde