You can't stay in Sedona without a trip to the Grand Canyon. I've never been except to fly over it, ditto, Eldy, and Kelly has never seen it. Yesterday morning, we attempted to get four different families coordinated together as far as leaving, who's picking up whom, when are we going to eat lunch, what time...It all fell apart in a general good natured way, cell phones were inconsistent...We got confused about what part of what scenic drive who was going when, we just decided to come into the park and take the eastern rim drive. 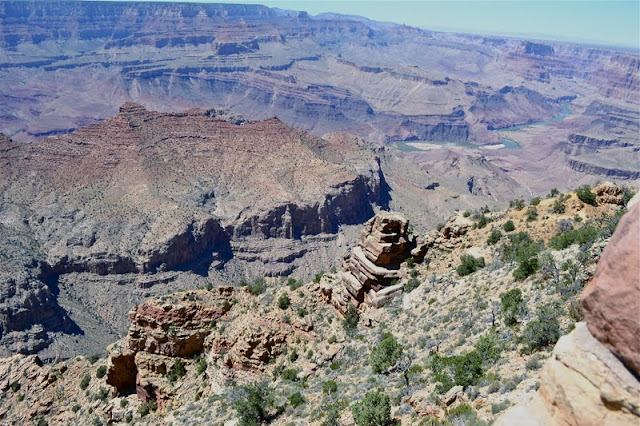 What was amazing to us was there was NO TRAFFIC to speak of at the entrance to the park! We didn't have to wait in any lines to get through the gates, the pullouts had plenty of parking for us to stop and take in the majestic sights, and we were able to see everything we wanted to see and this was on a Friday during a top vacation month. Some of the family managed to squeak in at the El Tolivar Lodge for lunch right before the 2:00 lunch closing, (they open back up for dinner) but we had brought snacks thinking we weren't going to be able to get in for lunch, and so we headed down the eastern Desert View drive first. Here is a description link to the Desert View Drive. 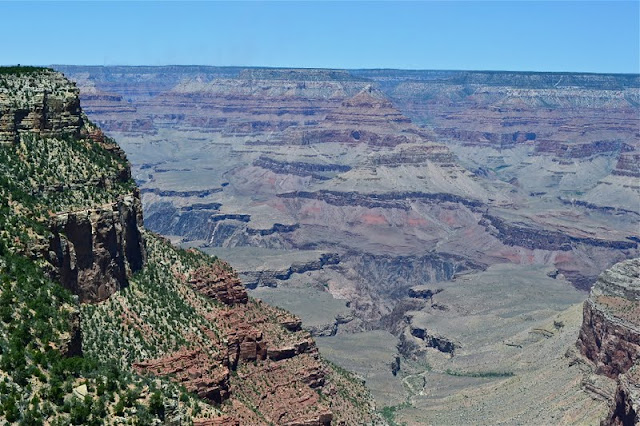 Everybody knows that photos just don't quite capture the spectacular, breathtaking views...We got a kick out of my brother Rich's viewpoint--he's been there three or four times--"The canyon never fails to disappoint." He meant just the opposite! Speaking of my brother, Rich....He walked across the street against the light and a cop pulled right up along side him and gave him a warning. "You don't want to be doing that in this town. There are some crazy people living here!" Speaking of crazy people, we did hear of the New Age followers of somebody, who came to town in 2007(?), and camped out on Bell Rock in town for two days, wearing the white togas garb. They were there to be "saved" by a spaceship coming to "deliver" them...They weren't very prepared, they had no food or water. When the spaceship didn't show up after two days, they gave up. Their leader told them the spaceship couldn't find them because the town was too dark! Sedona has a low light policy at night and the town IS really dark, so you can see the stars. At any rate, they are supposed to return in 2012 with flashlights. That's my story and I'm sticking to it. 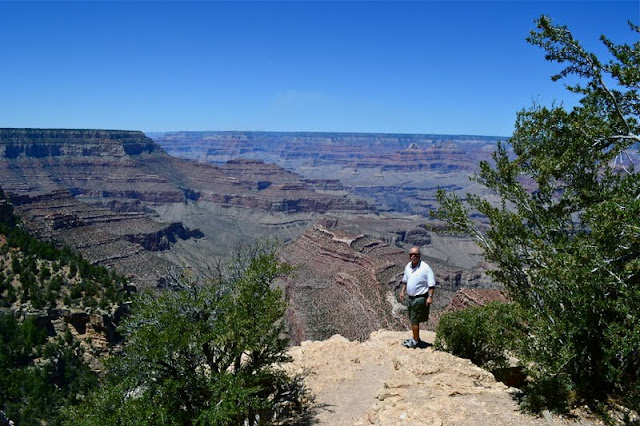 Grand Canyon? What can I say? If you haven't seen it, it's one of the most magnificent views you'll ever get to see in the United States. Judging from the number of foreign languages spoken at the rim viewpoints, more people come from other countries to see this grand place than Americans do! I had no idea so many foreigners come over in the summer months to see our terrific landmarks. 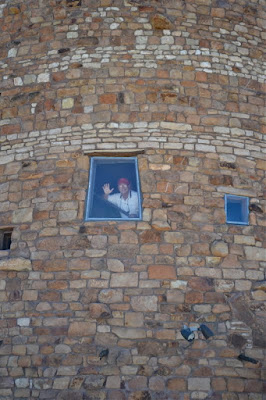 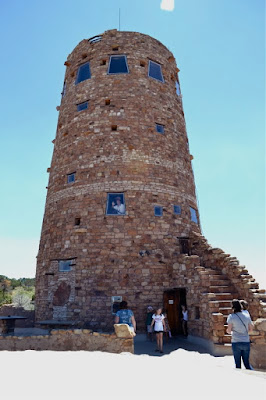 We LOVED the Watchtower....360 degrees views of the canyon all the way around...amazing! We climbed the 85 steps to the top and took some great photos..The Watchtower is a replica of a prehistoric Indian tower. It's at the eastern end of the Southern Rim of the Grand Canyon. It looks like an Anasazi tower which it is meant to replicate. It was designed by Mary Coulter. How she designed the structure with its varying texture is an interesting Google search or if you'd like to know more about it, here's a link to the Watchtower. There are trapezoid glass windows that you can look out of as you climb to the tower's observation point. The stair rails are wrapped in rawhide, and there are replica Indian paintings all around the ceiling and walls. The main ones were painted by a Hopi artist, Fred Kabotie. A unique gift shop is on the ground floor and it was wonderful! The multiple levels, the circular staircase, all the murals and petroglyphs really add to a mystical cave like atmosphere. It was VERY cool!

We had fun stopping at each viewpoint and trying to decide which view topped the last one. Kelly and Eldy and I really enjoyed ourselves today. If you haven't gotten to see the Grand Canyon, it needs to go on your bucket list of things to do...and if you have, hope we didn't bore you with the views today! I'm sure everybody's canyon shots look very similar unless you have a) National Geographic photography skill knowledge, b) a fantastic camera with a fantastic lens, c) a super duper photo editing program or all three!

The family's last day is tomorrow for everybody....It will be sad to say goodbye but it's time for everyone to hit the road, including us! We hit the road on Monday for destinations unknown...Actually, we know where Eldo is going...you'll see...It's kind of a surprise! Tomorrow I'll post some of my favorite family photos just so you know they really WERE here!
Posted by Jeannie and Eldy at 11:48 PM