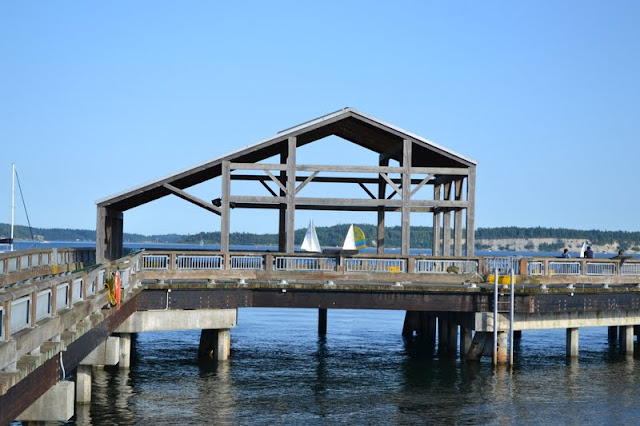 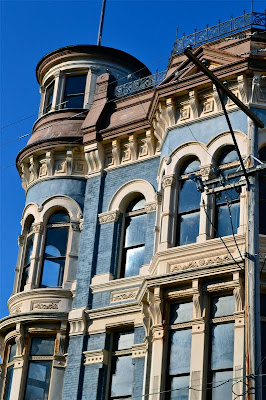 Port Townsend is a very cool town...it's about 10 miles from Chimacum. Being a harbor town, it has beautiful ocean vistas. Not only does that make it pretty, it's an artist colony, so there are LOTS of cool galleries, neat boutiques and great restaurants. The architecture of the main street in town is beautiful and many old buildings are well kept and have interesting details on them. We were wandering around the town yesterday and found a sign pointing to a restaurant down the stairs and UNDER the street. It was called Under Town. That caught my interest! (It just takes food and an interesting name to capture Sparky's interest! says E.) So down the stairs we went, along a dark stone hallway, and it's looking like we're going to the subway, and I'm thinking this is not going to be so great, and then---into a cool cafe/coffee/ specialty drinks and sandwich place. Light and airy, neat arched stone doorways, multiple rooms decorated with the coolest furniture and couches AND great food! They also were going to have live entertainment Friday and Saturday night. We snacked but didn't stay for the entertainment. How does pork tenderloin slices with fresh basil and horseradish and seasonings on a slice of baguette bread sound? Really, it was quite delicious! 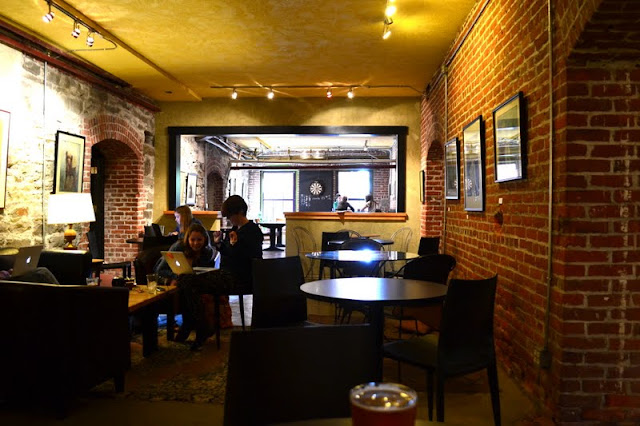 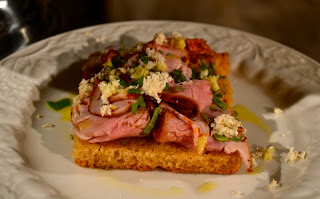 There's a boat building facility at one end of town, and we peeked inside. A guy was building a boat--naturally! Love that smell of freshly sawn wood....they are currently restoring a boat for the University of Washington for rowing...you know, the serious kind of rowing with multiple rowers and a coxman..I forget the name of it and my niece did it for several seasons. I think it's sometimes called  sculling depending on whether an oarsman is using one or two oars. At any rate, this shop offers classes in different aspects of boat building from what I understand. Tours are offered at certain times, too. There's also a wooden kayak boat building company in town, too!  Pigmy Kayaks and they make beautiful boats.  Cool town! 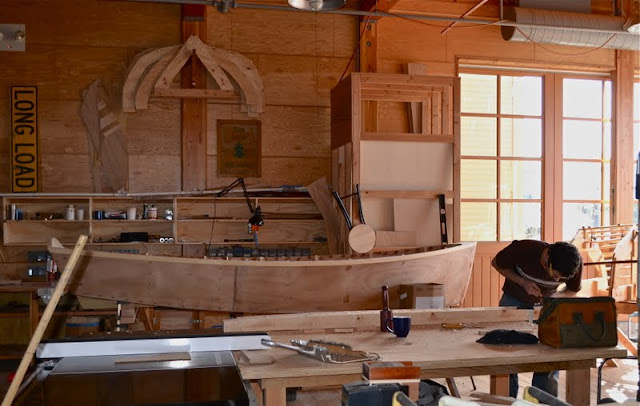 Then there are interesting people, like Captain Bob. I'm not quite sure if he's a local resident or not, but he certainly was interesting. He told us right off the bat, that people have called him "obnoxious". That should have been clue #1, but seeing as Sparky can be clueless on many occasions, we got ourselves into a predicament with Captain Bob which was not easy to extricate ourselves from, as you will see.

Eldy and I had been exploring the town late today, and we were a little tuckered out, so we sat down on a park bench in the middle of town. Along came Captain Bob, who wore a blue Greek sailor's cap, he was a wiry looking guy, kind of slim, had a mustache and a couple days growth beard and about two weeks worth of grit under his fingernails.  He appeared a little unsteady on his feet. He plunked down next to us at the other end of the bench and grabbed a hold of the top of the bench to steady himself. He proceeded to launch into a thorough and relatively coherent speech about fifty some years on the water makes you a little unsteady on your feet when you get back "on Earth" and by golly, that lady that he was just talking to didn't seem to understand that!  He started asking us questions and then after a few minutes inched a little closer to me. (Eldy was on the other side of me.) After repeating himself again, and telling us for the third time about his 1942 Coast Guard cutter that got dropped in his lap due to some fortuitous circumstances that remained rather vague, we realized that this guy was really quite drunk although his speech was quite clear.  We decided it was time to get out of there. Easier said than done.

Captain Bob had taken a fancy to me, and after he grasped my hand and my shoulder a couple of times, his boozy breath becoming more apparent, Eldy and I mutually decided it was time to go....but Captain Bob decided it was time to go with us! If we weren't going to give him a ride to the casino, and we weren't going to take him up on his offer to take us out on his boat, then he would just accompany us down the street in order to "finish my conversation" with "the young lady here." Eldy said he was going to go get the car, but first he had to find it! (a ruse so Captain Bob wouldn't follow him--it worked.) I decided to duck into a woman's store as my exit strategy--you know, the divide and conquer strategy.  I ducked into a woman's store with Vera Bradley purses, lots of soap and perfumed lotions, thinking a hardened, drunk sea captain like Captain Bob wasn't going to follow me into a "genteel" ladies store ....I managed to get loose from Captain Bob, hurried into the store, told the clerk my story, that this man had taken a shine to me and wasn't going to leave me alone..but I felt he was harmless. Could I hide out in her store? She said, sure.  I looked to see if Bob was behind me, he wasn't....GOOD! I ditched him! But----wait a minute, here he comes in the store, I'm looking for a place to hide, like in a box, or in a closet or behind some furniture. He spots me all the way at the back of the shop and comes barreling around the corner. He says to me, "Oh, good! Now that you have ditched your fiance, we can finish our conversation! You remind me of my late grandmother. (Thanks a LOT!) See, I was meant to talk to you and I just want to finish our conversation."  I'm giving desperate looks to the nice clerk, and she grabs me by the arm, and says, "Here, dear, I've got something you'll like back here," and Bob grumbles something about "I'm the one you should be talking to....I've got money!" He stumbles back out the front of the store, and she says, "Why don't you go out the back door and give him the slip that way?" I said great idea! She lets me out the back door and there's only one way to go back around the store and it's going to bring me directly into Bob's path at the front of the store if he's still there.

It must have been comical to see me peek around the corner of the building head first to see it there were any signs of Captain Bob. I had visions of rounding the corner and bumping right back into him. Coast was clear. I started down the street. Oh, no! There's Captain Bob standing on the opposite corner, looking for another target or the same one, ME, to talk to! I ducked down a bit, to the level of the cars, and some guy who was parking his car looked at me like I was a crazy lady. Crazy like a fox! I was bent over, like a woman with severe osteoporosis, walking quickly hunched over past the row of cars...almost there to the corner.  Hurry, now! He's not looking this way...Jog around the corner, past Captain Bob on the opposite side of the street--yay! In the clear!  Boogie towards Eldy, heading my way, who was wondering why the heck it took me so long in the woman's store! He should know better! A Vera Bradley purse store, perfumed soaps and lotions? C'mon!  No, really, he was concerned, and before any readers decide that my man should have stayed by my side the whole time, you don't know Sparky! Twenty years of being single have made me one TOUGH chick! And besides, we knew, Captain Bob was harmless, he was just a little too persistent. Why didn't we tell the old buggar to just buzz off?  Because we are just too darn polite to strangers, both of us! But we handled it the way we do as a team......like most things...  :-)  We laughed all the way back to the car.... Sorry, no photos of Captain Bob, that would have really made things more difficult!

The next two days are going to be relatively quiet...my phone died so it's off to Kingston to the ferry, over to Edmunds tomorrow to the Apple Store at the Alderwood Mall. Hope to get a new phone, but we'll see...my iphone died after 15 months...completely unrepairable and unrestorable. Not sure why. I've been carrying it in a purse that has two magnetic catches on two outside pockets. I've been putting the phone in one of those pockets regularly. The magnets might have killed it, I don't know! But stay tuned, you never know what's going to befall Sparky and Eldo, life might just take a twist in the next two days, who knows?
Posted by Jeannie and Eldy at 11:47 PM