We pulled into Scipio, Utah last night at the Flying J. off highway 15. It was a smaller one, there appeared to be only truckers lanes for overnight parking. When I called on the phone beforehand, the attendant said, "Just park around back." We looked the parking over and it was quite full of truckers only. We could have parked among the Big Boys (Whaddya mean Big Boys? We're one of them counting the tow car! protests E.) He's absolutely right, but it still didn't feel right. There weren't that many lanes left and what if some overtired truck driver pulled in for the night and saw us sitting in the truckers' lane and he/she couldn't get in? So off we went a little farther. We knew there was another Flying J about 30 miles up the road in Nehi, and there was plenty of room for us and our car without unhooking. We covered 478 miles today, unintentionally! It was relatively quiet for a truck stop..we were so pooped that we slept pretty darn well. I was pooped from knitting all day, and Eldy was pooped from driving. He had the hard part!

We set off this morning from Nephi, drove along highways 15 and 84, and ended up in Mountain Home, Utah, traveling about 368 miles today. We were going to stop at the Carmela RV Park in Glen's Ferry, but there were questions about only having 30 amp power at that park. There's a winery across the street and a four star restaurant there. (Whew! I'm glad we continued on, we would have broke the budget all the way around if we had stayed there, sighs E.)

Mountain Home is about 40 miles southwest of Boise, ID. We found a great park, Mountain Home RV Park, a little over budget, (33.00 a night with Good Sam's discount) but after spending the night in the Flying J last night for free, Eldy deserves a nice spot for the night. We're not sure if we are going to stay one night or two. This is high desert country, and there is LOTS of wind, about 20-35 miles an hour right now....however, VERY pleasant! Temperatures in the daytime were about 90 degrees today while we were traveling and they are going to get down to the mid fifties tonight in Mountain Home. Sparky likes that! Great sleeping weather! 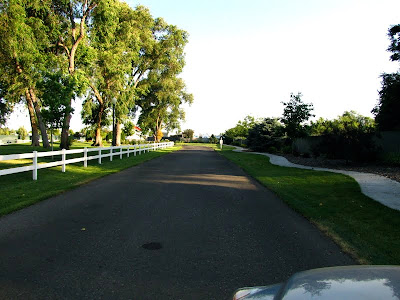 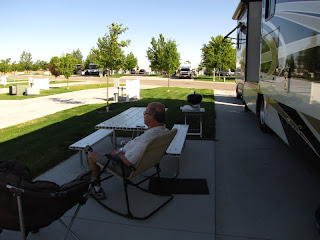 This would be a nice stay for more than just one night. It's a relatively new park, about 6 years old. Sides are concrete pads, all pull throughs, full hookups. There are some sites that have more mature trees than others, so there is some shade. As you come in the entrance, it's beautifully landscaped with rose bushes, stone and mature trees. No pool, but that's ok...free wifi, air card works FAST. The office staff was super friendly and guided us to our site. There are lots of scenic byways in the area, but we're kind of all traveled out at the moment, so we're probably not going to go driving in the car any time soon.

It's kind of a winding down time for a bit after all the hubbub of the family coming and going, so the blog is a bit boring today. An uneventful drive today, the part of Idaho we were in was flat, sandy looking and drab. Idaho is anything BUT! when you see the guides they put out. We'll have to check it out this evening and see if there's something nearby we want to see before heading to Oregon. We are hoping to get to Oregon soon as we want to explore the Columbia Gorge a bit before heading to my youngest brother's wedding in Easton, WA on Aug. 6th. What's our destination tomorrow? North and west, that's all we know! Or maybe right here still at our site at Mountain Home. See you again soon!

Here's a photo leftover from visiting Jerome...this guy has lots to say! I don't know about you, but having been a teenager in the sixties, I LOVE seeing the VW bus still running around. My daughter and I didn't stop to read all the bumper stickers but it's a flashback from the past! I'd love to see who's driving this thing..... 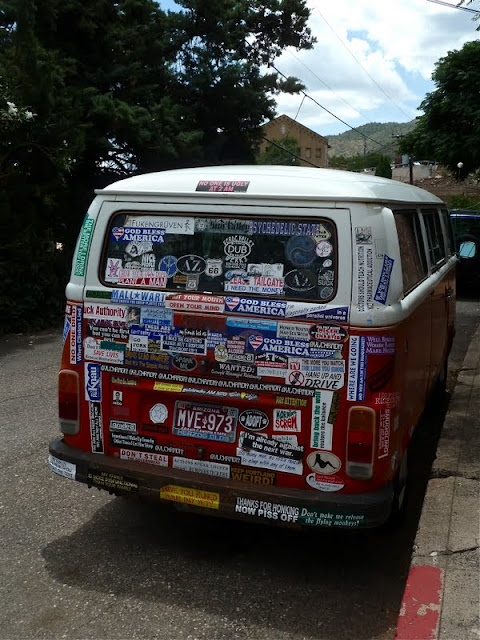 Email ThisBlogThis!Share to TwitterShare to FacebookShare to Pinterest
Labels: driving from Utah to Idaho