Chima-where? I keep wanting to say Chimichanga...I haven't had Mexican food in so long, I'm craving it. (Uh-oh! Not me!) E. doesn't care for Mexican food, but there sure are some great Mexican restaurants around! I might have to sneak off by myself for some "me" time if I hope to get any! We're in Chimacum, Washington...up near Puget Sound, about 45 miles north of Seattle...It's a tiny little town.
After a long drive zig-zagging across the northern part of Washington on that crazy, curvy highway 101 which splits in two in the northern part of the state, we then headed east towards Chimacum. There were the usual bridges and wetlands scenery, and the lush forests we passed through. In Raymond, WA, we noticed that the whole town was decorated with what appeared to be various iron sculptures...those flat kind like the ones you see where a cowboy is leaning up against a fence? Only these were rust colored. They were all over town. If I hadn't been knitting, I might have captured some of them to show but I would look up at the last minute when Eldy would say, "Hey, there's another one!" We probably saw at least 10 throughout the town. We passed some unusual places--Eldon, Washington (Eldy's legal first name), and this park. Not sure I'd want to stay there! 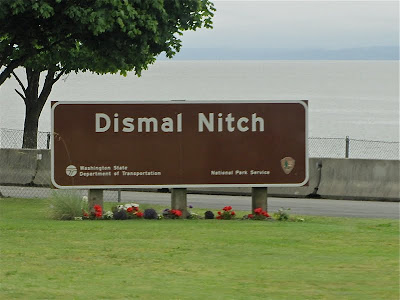 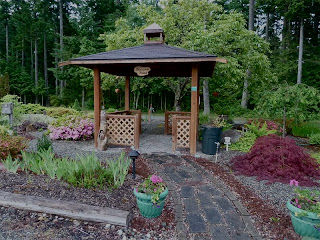 Without any mishaps, we landed at our Escapees Park destination...Evergreen Coho....It's a beautiful park...only 22 sites with full hookup, the rest are resident sites. We got lucky and got here early before the 4th of July weekend when a lot of places and RV parks fill up. Great price, 109.00 for seven days. Eldy was tuckered out after driving the entire 4 1/2 hour drive, negotiating all those curves on that 101. (Sparky doesn't drive yet, but she's gonna one of these days!) Like from rest stop to rest stop. Although the sites for the drop in people are totally gravel, the rest of the park is absolutely beautiful. The grounds are spacious and green and well manicured, there are mini gardens all over the park. 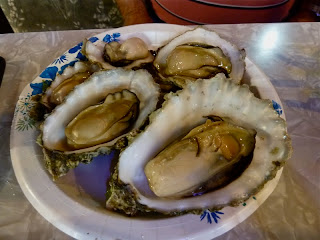 This is one of the prettiest Escapee parks we have seen. No pool, though!

We decided to check out a local restaurant later in the day and were glad we did...The Valley Tavern in Chimacum. It's quite old from its appearance inside, but it's a locals hangout and they know where to eat good food! Tuesday nights are their steak night special...about 12.00 for a steak, all the salad and french fries you can eat and 2 plates of steamed oysters and clams allowed for each person for just a little more extra. Our bill was 22.00 for the two of us. I had steak and a salad for 9.00, and Eldy made up for the rest in clams and oysters and his steak dinner and salad. The steaks were delicious rib eyes. He can have those oysters! Ugh! Just not something I care to eat! Check out the large horsehoe bar. Everybody's within earshot...careful what you say! 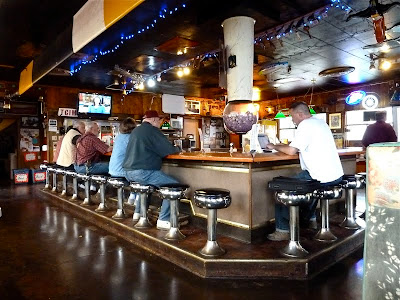 We're looking forward to exploring the area...we'll be hitting a visitor's center to collect brochures, books and deals for the area. Then Sparky sets to work planning a must see-must do list for the next few days, with Eldy's approval, of course! (You mean, I get to have a say in what we are going to do? Woo-hoo! What that REALLY means, folks, is Sparky's gonna pout if she doesn't get to do what's on her list! But usually I enjoy them, too) And there are some cool hikes in the Olympic National Forest. (Sparky, I thought you said you were all hiked out!)   I'm just getting my second wind, honey!  See you guys later! Where, I have no idea!
Posted by Jeannie and Eldy at 11:56 PM

Email ThisBlogThis!Share to TwitterShare to FacebookShare to Pinterest
Labels: traveling to Chimacum, WA