So Many Sights, So Little Time

I didn't show you all of our photos yesterday....So here are some more! I stand corrected in telling you that when you take the ferry, about a 30 minute ride from Larkspur to San Francisco, you land at the ferry terminal building. From there, THEN you take a cable car to Fisherman's Wharf, Pier 39. And that's where all the wonderful sights, smells, and sounds abound. And where you might get crushed by the crowd if it's a busy day...we went on a Thursday, and it was very nice, not crowded at all. 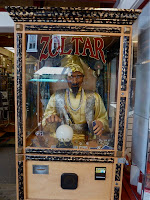 We saw my friend, Zoltar, at the Wharf. He really gets around! We've seen him three times now...I never ask him to tell my fortune, but I am a sucker for those penny machines that take a shiny penny, squash it flat and imprint a local scene on them. I've started collecting them on our travels. It costs .51 to make one. I think I'm going to drill little holes in the tops of them and make mini Christmas ornaments out of them to put on my little Christmas tree in the RV at holiday time.

I love this photo I took of the Golden Gate Bridge. 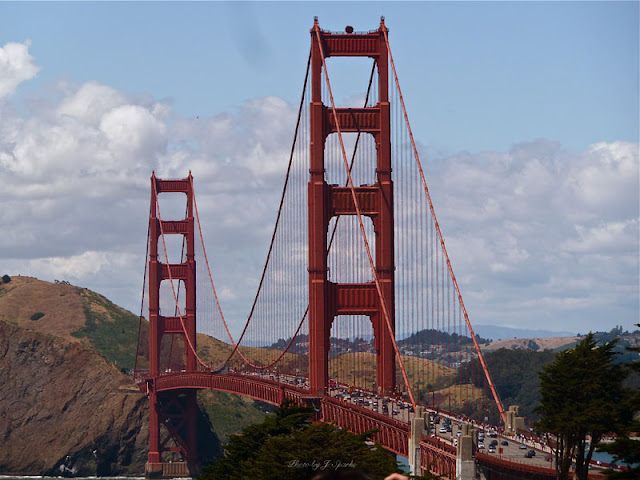 It's not really golden, it's a very reddish orange... 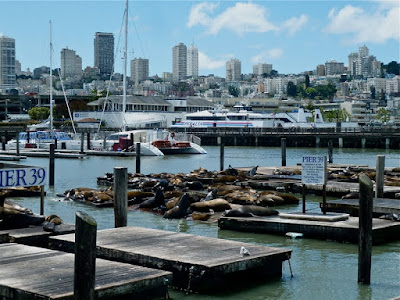 We spent quite a bit of time yesterday at the Wharf...they have sea lions there, too. They were just basking in the sun on platforms...most of them look like they were dead they were sleeping so much. But a couple of frisky younger ones were going at it, playing hard and for what it looked like, doing some serious wrestling to see who was going to stay on the platform in that particular spot, and who was going to end up in the water. It was very entertaining to watch. The blacker one just kept pushing and shoving the tanner one until he fell off the platform, at least six or seven times. The tan one would just heave himself back up on the platform for more punishment. 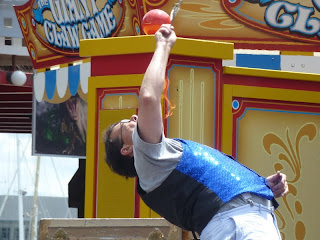 If you look closely, you can see he is swallowing fire! Wish I had gotten a better angle! There is more live entertainment around the wharf--we saw a guy singing and playing some great blues and jammin' with a harmonica in his mouth at the same time and he had the neatest curlique mustache and beret.....cool! 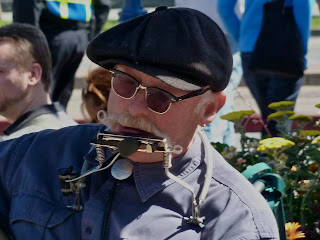 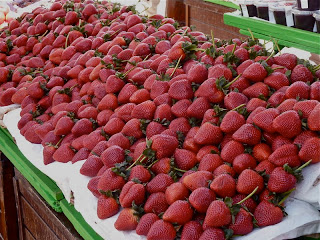 And did I say I was a sucker for California strawberries? Yesiree, I surely am. I paid 9.95 a pound for a bunch of huge strawberries because I was too shocked at the checkout register to say, "Sorry, that's ridiculous price!" Luckily, I only had a few in the bag...So don't get suckered into buying expensive fruit the wharf like I did...I should have known better when there were NO prices posted anywhere for the fabulous looking fruit at this stand.    ("No comment" says E., wisely.)  Now you have seen our best photos for our first day in San Francisco. But wait till you see the drive we took on Highway 1 on the coast!  That's coming up tomorrow.....see you then!
Posted by Jeannie and Eldy at 11:30 PM