I Left My Heart in San Francisco

What a beautiful city! We decided the best way to explore San Francisco was to take the ferry in. We drove to Larkspur to the ferry station, about a 45 minute drive from Santa Rosa in good traffic. On the way to S.F., we saw the San Quentin prison. There were inmates out in the prison yard. It was weird to see that having only seen it in movies. It didn't seem real until we saw it. The ferry ride takes you into Pier 39/Fisherman's Wharf, home of over 100 shops and restaurants. San Francisco is a walker's town, easy to get around and the town itself is only about 7 mile by 7 mile square....surprisingly small in area, but jammed with people, so you are encouraged to use the public transportation system.  Cable cars are 2.00 to ride ALL DAY, get on and get off as many times as you wish, just be sure to get a transfer slip the first time you get on one. The traditional trolley cars are five bucks every time you get on one, and every time you get off and take another one some place else. We rode the cable cars today to get from the ferry terminal down to the wharf...

We started out with a wonderful breakfast at the Eagle Cafe on Pier 39, which has been there at the wharf since 1928. Expensive, (14.95) so we split one breakfast--it was plenty of food for two! Scrambled eggs, onions, potatoes, Swiss cheese, and homemade corn beef hash..it was delicious! The greenery is sticking out of a huge English muffin, and the "sticks" are fried angel hair pasta--interesting garnish! 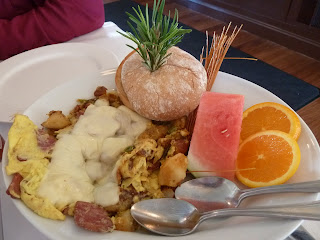 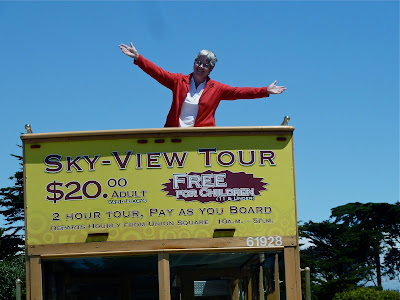 Then we decided to take a Sky Line Tour for 20.00 a person to see the city--very reasonable price, we thought. They take you on a refurbished trolley car around to the different neighborhoods, Chinatown, Haight-Asbury district, around by the Golden Gate Bridge, and up and down the infamous San Francisco hills--STEEP hills..How steep? you ask. So steep that you can smell the brakes when you stop and get off the open air remodeled trolley car. Eldy told me that later. I'm glad I didn't smell it at the time! Would have made me a nervous wreck! It was a beautiful day so we sat up on top of the trolley. I always have to sit up on top whether it's a double decker bus or the ferry. (E. says, "I KNOW!) You have to watch for low hanging branches, though! Somebody could easily end up with a scratched face from all the branches we ducked if they weren't paying attention or taking photographs. I had some close calls! And talk about the wires up above for the cable/trolley cars! That was closer than I wanted to be while standing up to take a photo. (Tch! Tch! You're supposed to be SEATED on the tour, Sparky!) 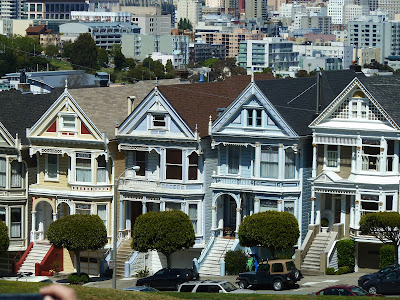 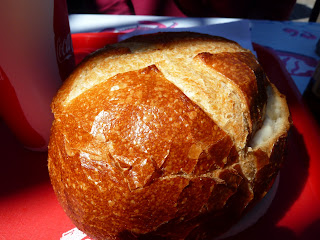 We saw the row of houses where they filmed the T.V. show "Full House"...and the house that was in the movie "Mrs. Doubtfire" and lots of other film locations....I lost track of them all by the time the guide got finished. We went through a national park called The Presidio which I had never heard of. Beautiful area, and where they are building or have built the George Lucas Digital Arts building. After the tour, we stopped for a bowl of chow-dah (clam chowder, my favorite) served in a sourdough bowl back at the wharf before heading back on the ferry to Larkspur, then home to Santa Rosa. The late afternoon sun was shining on all traffic on the San Mateo Bridge (?) making the moving vehicles look like sparkly diamonds rolling across the bridge. I love the temperatures here...they say it hardly ever gets above 80 degrees in the summer, and the average daytime temperature year round is in the sixties...love it! 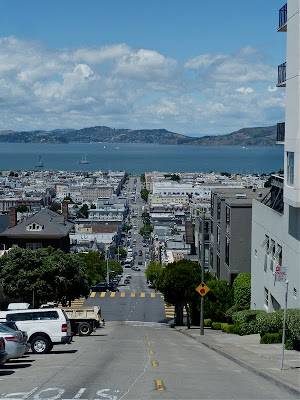 A beautiful day in a beautiful city....we hope to come back again before we leave for Oregon, which won't be for quite a few days just yet....We haven't ridden a genuine trolley car yet, or seen Chinatown! But wait, there's MORE! I just didn't show it all to you today...Come back tomorrow and see more of San Francisco.
Posted by Jeannie and Eldy at 11:45 PM

Email ThisBlogThis!Share to TwitterShare to FacebookShare to Pinterest
Labels: a trolley tour of San Francisco