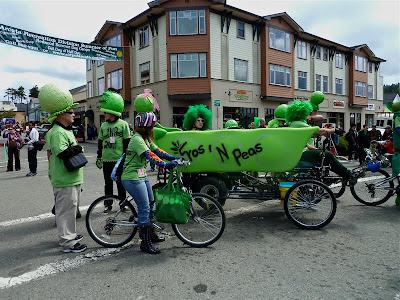 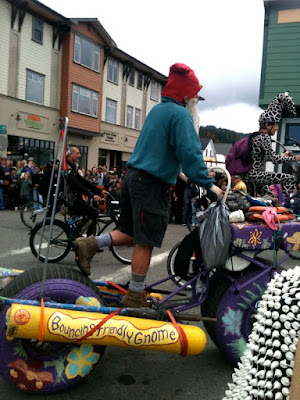 The small town of Arcata, CA is home to an unusual bike race held every year around Memorial Day weekend, the Kinetic Grand Championship Bike Race. We happened to see an ad for it in a welcome center a couple of days ago and decided to check it out. The founder of this race, Hobart Brown, started it in 1969, and it's been going ever since. This year was the 42nd annual race. Contestants have to design a bike sculpture that will go over sand, land, water, and mud for 42 miles starting in Arcata, CA and ending up in Ferndale, CA. It's a three day race. This race was a HOOT!

The whole town gets into this....locals dress extra funky for the race, the team participating in the race has a kinetic pilot who steers, a pit crew that helps them with the design and machinery functions of the vehicle, and peons. The peons do whatever it takes to help the team "get glory", like bribe the judges and the spectators, which is expected. The first part of the race is on pavement, then they have to go over sand dunes, and through Humboldt Bay. We didn't see the sand and water part of the race or the herculean efforts to get some of these contraptions over the sand, water, mud, and everything else, but a lively crowd follows them for three days from the town of Arcata to Ferndale, CA at the end of the race on Monday, Memorial Day. 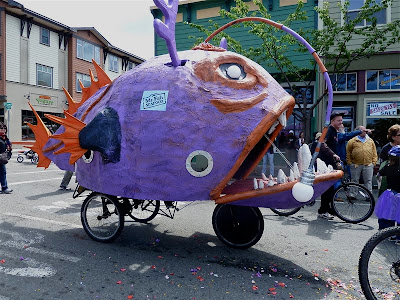 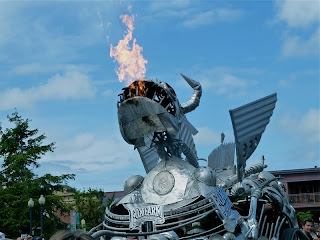 We had a great time today watching and taking photos of the craziest vehicles we have seen. The crowd, estimated by one judge to be around five thousand, enjoyed all the unique kinetic inventions as well. People were laughing and snapping photos like crazy with cell phones and cameras. People sat on the tops of the buildings in Arcata town square, their feet dangling over the edges of the rooftops, in order to get a better view of the shenanigans. My favorites are shown pictured, but the coup de grace was the fire breathing dragon! What an awesome bike sculpture! I wish we could see how these guys get through the mud, sand, and water, but we're not going to be able to see that. 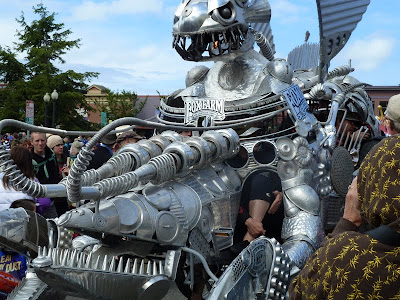 They had a local band playing, and they were a hoot, too! The band really got into the music, rockin' and rollin' with their instruments while playing and in goofy costumes to boot. They really enjoyed playing to the crowd and the crowd was very appreciative of their efforts.  This is a town that knows how to have fun! 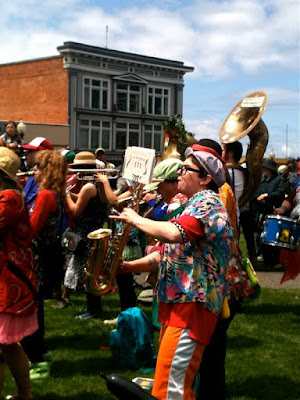 The bike sculptures parade around the town square at least twice, then they take off on the race. It was surprising to see how quickly some of these vehicles got up to racing speed! And some that didn't.... 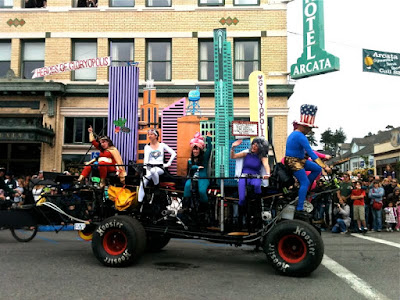 We thought this person might be one of the local dignitaries.... 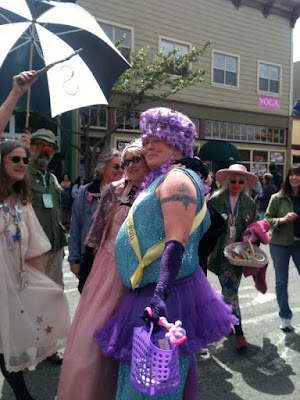 We sure had a great time today...if we can, we're going to try and find a couple other spots where the race is going on this weekend and see how the competitors are holding up. I guess one of the coveted awards (and there are quite a few of them) is the "Mediocre Award"....a prize for finishing in the middle of the race.  And the goofiest thing was, we happened to turn on the TV Monday, and the videotape of the sand and water segments were on local TV. Hilarious!  Great fun, great race, great town, good job, Arcata!

See you who-knows-where tomorrow!?
Posted by Jeannie and Eldy at 11:45 PM