Before we tell you about Highway 1, we just HAD to visit the Sonoma/Napa Valley where there are over 450 wineries in that particular part of California! Guess you can call us "Sonomads"--according to a local brochure promoting Sonoma County wineries, that means we are "people prone to wander around Sonoma County in search of new adventures". Yup! That's us! 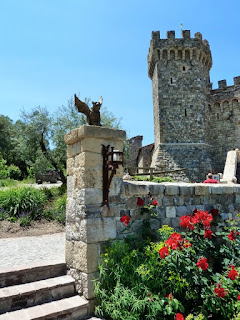 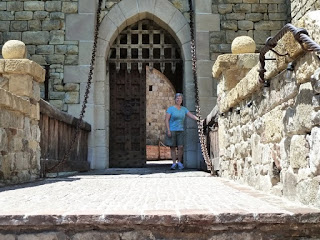 We took highway 12 to Napa, then highway 29 all the way to the northern part of wine country. One of the first stops we made was at Robert Mondavi, one of Eldy's favorites...we couldn't make up our mind about which tour we wanted to take, so off we went to get a bite to eat and then on to the Castello di Amorosa, (the Castle of Love in Italian)..a Tuscan castle built over 15 years duration and opened in 2007, made to look like it was built in 10th-12th century Italy. This castle has a drawbridge, a dry moat, 107 rooms, a 500 year old fireplace in the Great Hall which has 22 foot high ceilings, a Tuscan farmhouse next to the castle, chickens and sheep in REAL primitive stables on the grounds, towers, and a church that holds old Latin Catholic Masses for the public. 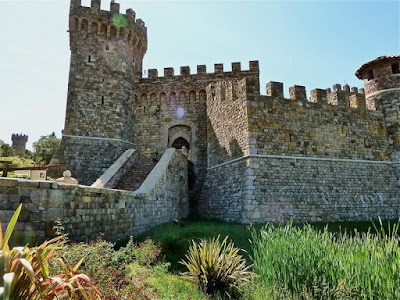 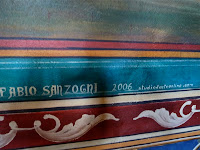 Daryl Sattui opened his first winery on a shoestring from the proverbial VW bus way back when and was so successful, he opened up his second winery, the Castello di Amoroso in 2007. He's 67 today and still adding onto the castle. He had 850,000 bricks shipped over from Italy, the terra cotta roofing tiles, the ironwork, it was all done in Italy and shipped over, two Italian brothers were hired to paint all the frescoes in the Great Hall. One of the brothers had to go back to Italy, so the remaining brother finished the painting of the frescoes and left his modern day mark on the wall. (small photo) In case you can't see it, it's his online address in case you want to hire him!
This castle is AMAZING! Daryl Sattui paid minute attention to getting the details right of being historically correct, right down to some of the openings in the castle being bricked up because back in medieval times, you were taxed on the number of open windows and doors...The woodwork, the ironwork, the tiles were all hand done using Old World crafting techniques. The only part of the castle that was not brought piece by piece, bit by bit over from Italy were the the 8,000 tons of local quarried stone that forms the courtyard floor. Stone is stone, and it's old, no matter where you get it from, right?

This is a working winery, and on the wonderful tour we took with Christina, we saw several levels of the castle, including the storage cellars in the caves and tasting rooms, AND the torture chamber, with a 300 year old Iron Maiden. I think they would put prisoners inside the Iron Maiden, then shut the door and you would get skewered. The winery uses hawks and owls to hunt predators that harm the vines--gophers and moles...I like that--they are working hard to be environmentally friendly in their winemaking! Christina was a great guide--very funny, very smart and knowledgable about the wines. We learned a lot of interesting things on the tour about the castle and winemaking. 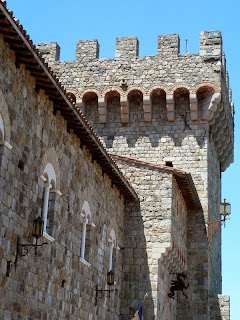 The tour was one of several offered--but not the most expensive--for 32.00 a person, you get an hour and a half tour, five wine tastings, and access on the tour to several different levels. There are cheaper tours available, too. Some people think this is a tourist trap, some people don't care for the wines, but we loved every bit of it and came away with one bottle of midpriced wine for 28.00. They don't sell their wines online, not in restaurants, not in stores, so that was a reasonable price we thought. We thought it was awesome that this guy built something for future generations that is going to last and isn't falling apart like so many architectural icons are, or in so much ruin or disrepair you can't tell what you are looking at or begin to imagine what living in a place was like--this one you can! You don't have to go to Europe to see an authentic Tuscan castle, there's one right here in Sonoma Valley for you to appreciate and enjoy. Where is this wonderful castle, you ask? Near Calistoga, CA between St. Helena (5 miles north) and Calistoga on highway 29.
Beautiful wine country, Sonoma and Napa Valleys...thousands and thousands of acres of vines...we have never seen anything like this before in our lives...you can see why California has overtaken France in wine production..we think we read that somewhere! Hills and hills covered with vines...you wouldn't believe how much there is!  We're coming up to our scenic drive on highway 1, along the California coast--finally! Look for it tomorrow..... 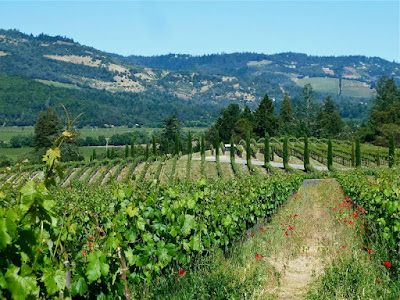 Email ThisBlogThis!Share to TwitterShare to FacebookShare to Pinterest
Labels: Castello di Amoroso, the Castle of Love