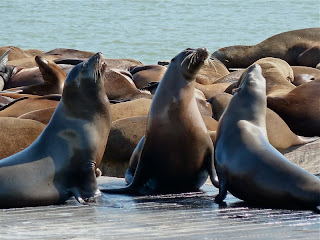 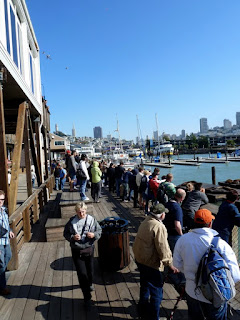 I could spend all day at Fisherman's Wharf, (Pier 39 on a cable car stop after you get off the ferry)....there are the most interesting people and entertainment for you to enjoy along the wharf! You've got your sea lions who are very entertaining to watch, almost as much fun as watching the people watch the sea lions!

You've got your street entertainers who are regularly scheduled to appear along the streets as you walk the wharf, and the entertainment in the form of music--very talented musicians play at the main wharf daily--the wharf where the Aquarium is, is where some of the best music seems to take place. One of the cutest things we saw was a guy in his seventies, at the MINIMUM, dancing on inline roller blade skates to the jazz saxophonist who was playing at the time. The elderly skater put all of us to shame the way he was so agile on his skates--little hops, skips and jumps and twirls in time to the music. It was wonderful and doesn't he look dapper in his hat!? 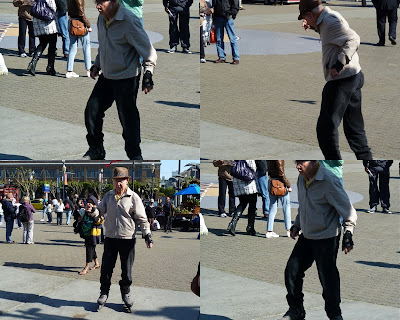 We saw a man totally painted silver, skin, hair and clothing--he was walking to his "gig" when we saw him. We saw another guy who was a gold pirate--gold skin, again, gold clothing and dressed to the nines as a swashbuckling pirate.... 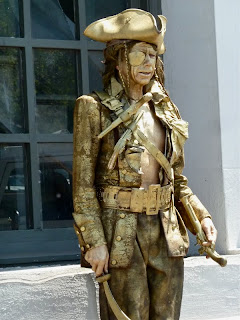 We saw another guy, or rather, I didn't see him...he was hiding behind some branches of shrubbery, sitting at the side of the sidewalk, and as unsuspecting passers-by passed him by, he revealed himself with a big loud "ARRRGH!" scaring the you-know-what out of people who weren't too observant at the moment. ("Hey, he got you really good, didn't he?" asks E. "You should have seen yourself jump out of your skin!") Yeah, yeah! This was how this guy was making a living at the moment! Geez, I need to get more creative with my money making efforts while on the road, me thinks! 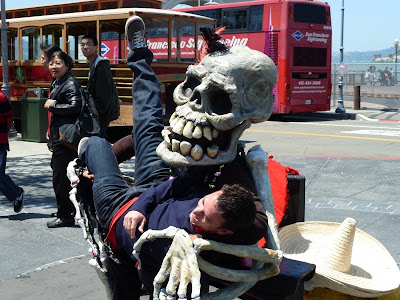 We didn't see how he grabbed the guy off the street, but everybody was laughing and having a good time, and isn't that what it's all about when you are seeing a new city for the first time? 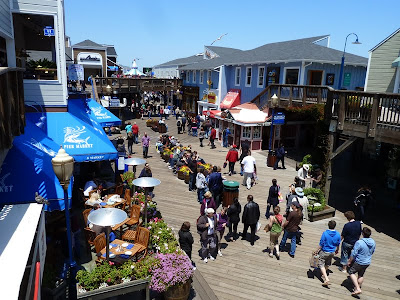 Fisherman's Wharf may be touristy, but it's beautiful and interesting! There were some heckuva great buys in clothing--San Francisco labeled fleece lined jackets for 14.95 that looked every bit as good as an LL Bean jacket, great tee shirts for less than 10.00, ball caps for 5.00 and MADE IN THE USA--Yay! We each bought a ball cap...you can never have too many hats as they get lost in the RV and buried in the car...I bought a couple of great tote bags for 5.00 each to stow my knitting in and they appear well made. 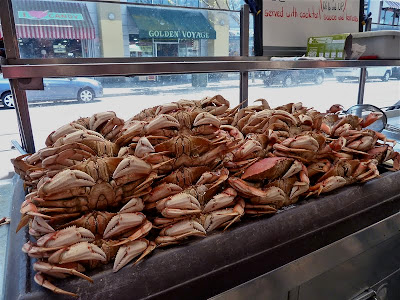 And the FOOD! If you are a "foodie" like me, you'd love all the restaurants and streetside seafood shops to get CHOWDAH,  dungeoness crabs and other delectable delights, like Boudin's sourdough bread. Eldy likes to say we are eating our way across America, but honey...I'd like to stay long enough to eat my way through San Francisco...(Uh, it's a good thing we are moving on soon! says E.)
We had a great time today walking the wharf...and we'll definitely return again some day......
Posted by Jeannie and Eldy at 11:45 PM