Seeing the "Big Guys" --the Sequoias at Yosemite 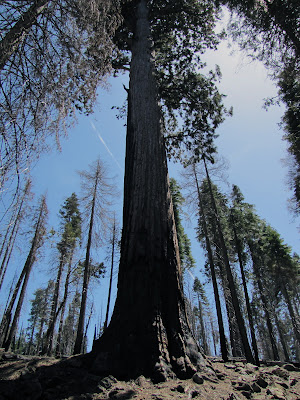 There is a grove of giant sequoia trees at Yosemite...actually there are THREE groves but Mariposa Grove has the largest stand of these giants--over 500 of them. I always thought sequoias were the oldest living things on our planet. They're not. I thought they were the tallest living thing on our planet. They're not! Coastal redwoods are taller....about 310 feet compared to the sequoias in Mariposa which top out at about 290 feet high.

When you come into the grove, the first giant you see is a fallen sequoia called appropriately, the "Fallen Monarch". When you see it on the ground, you really get a good idea of the size of these humongous trees! There's a lot of tannic acid in sequoias (the stuff that often makes waterfalls and streams a reddish color) so it takes a long time for them to break down and decompose. The roots of these giants surprised me, they are very shallow but they spread out, sometimes as much as 150 feet. That makes them more stable for their extreme height. We noticed a lot of signs asking people to stay on the trails and not walk around on the grounds around the trees because all those tourists tramping around compacts the soil and damages the roots. 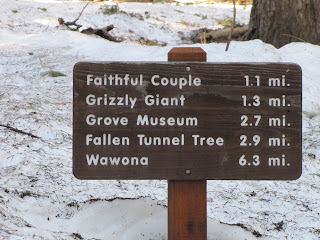 What was interesting to me, is there are more sequoias nearest the roads than there are back in the forest. That's because road construction opens up the forest to sunlight and more moisture along the roadside so seedlings take root there. Not until the 1960's did conservationists understand the role of natural fires that allowed the giant sequoias room to grow and develop. We suppressed forest fires for so long, competing evergreens took over the forests and made it difficult for the sequoias to grow. Now the forest service does prescribed burns to get the forests back to a more natural state, one where Mother Nature weeds out the forests with lightning so the forest service won't have to. 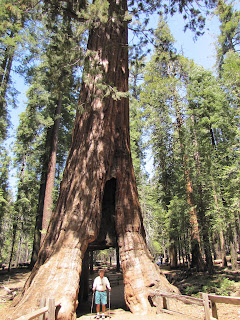 We saw the "Giant Grizzly", one of the largest trees in the Mariposa Grove and they think it is over 1,800 years old! We walked through the California Tunnel Tree which had a center piece cut out in 1895 to allow horse drawn carriages to pass through it. These trees grow to be so old because they are fire retardant and resistant to disease and insects. It's really difficult to get a perspective on just how tall and big these trees are in a photo...they were GIGANTIC!

The path to walk the grove was very wide and handicapped accessible. There were a variety of trails you could walk to see all the different marked trees that had names. It was a beautiful day to experience this remarkable wonder of nature.....It makes me want to go see the Giant Sequoia National Park to the southeast of us...but I think we're going to have to wait till our next trip to this area...Yellowstone beckons! We're in the process of planning our way SLO-O-W-LY to the Yellowstone National Park. It's currently getting quite a bit of snow, so we'll watch the weather to know when a better time to go might be. We're heading for a scenic drive tomorrow up into the Sierra Nevadas! 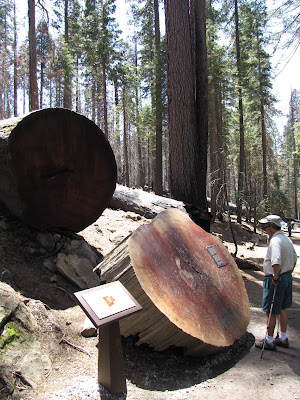