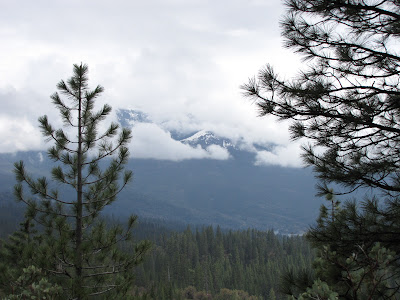 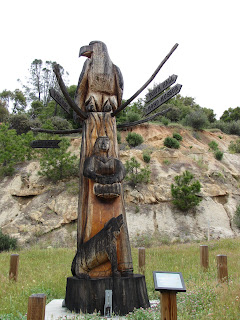 This is a 100 mile long scenic drive through the Sierra National Forest with breathtaking views of the Sierra Nevada Mountains. We had to drive from Coarsegold to get on the byway in North Fork, CA., which was about 20 miles and we just drove a piece of it today. We passed an interesting wood sculpture on the road on the way to North Fork. This statue was to honor the Eagle and Coyote clans of the Mono Indians who settled the North Fork area. It was carved from a single sugar pine tree. North Fork advertises itself as the "exact center of California", so I guess it is! The road climbs from about 2,000 feet to well over 6,000 feet. You see granite formations all over the place, there are places to swim, waterfalls to see, campgrounds to spend the night in (but we didn't see any suitable for large motor homes), and there's a "One Mile High Vista" point where there are mountain tops over 13,000 feet in the distance. This is a spectacular overlook that lets you see at least FIFTEEN named mountains over 10,000 feet. Here's a link to a sample itinerary (which we didn't see until after we drove the highway today!) and what you can see at each stopping point. Sierra Vista Scenic Byway. We just decided to get in the car and get out onto the road. The day we chose to drive started out with dreary gray overcast skies, which quickly became fog as we climbed to higher elevations. 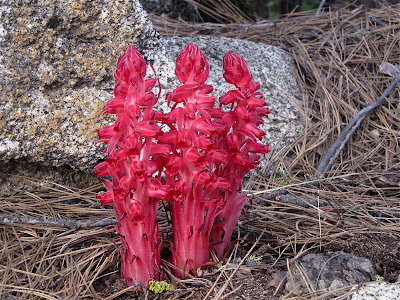 We saw lots of interesting things, beautiful waterfalls, rushing river streams, and fantastic mountain views once the sun cleared out the fog. Here's an interesting plant emerging..there were very few of these around...a cluster in one little spot, then you wouldn't see any more for miles along the road. Not sure if it's a mushroom or fungi of some sort, a shrub emerging or some kind of flower. But it was beautiful! Such a contrast to the greens and browns. They stand out like a sore thumb when you see them!

We saw many HUGE trees, some were sequoias, we think, some were incense cedars, and some were something else! But there were many giants in the forests as we climbed ever higher. Check out the size of this pinecone! 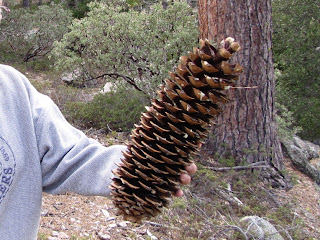 The smaller trees were just beginning to show their buds and they were very pretty, too. Not sure what kind of trees these are, but they were so beautiful....they kind of look like oak leaves but the color threw me, they really were this beautiful rose pink. 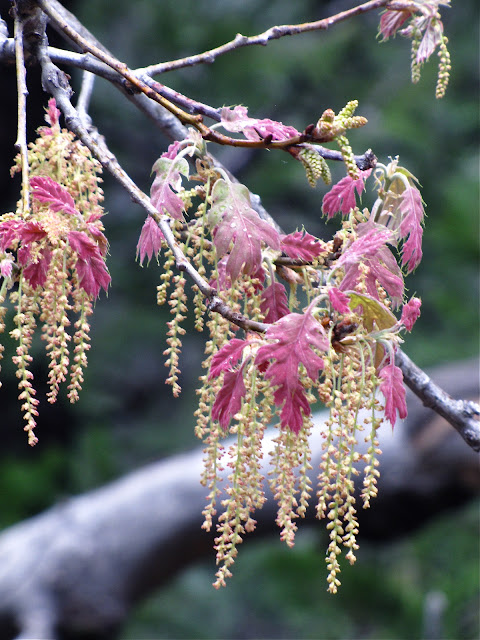 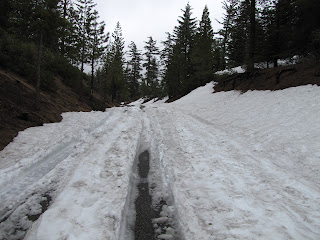 After we climbed to over 6500 feet, we ran into snow, DEEP snow that looked just a little too risky to drive through. It was obvious that the roads were not going to be plowed after this point, and due to the rock falls that had happened over the winter, we were dodging more than driving straight, and so we turned our little Honda CRV around and headed back home.....We're going to come back and explore some more of this beautiful, beautiful drive on another day........see you tomorrow, if Blogger doesn't go down again!
Posted by Jeannie and Eldy at 11:45 PM