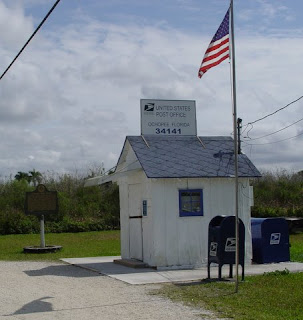 At least that's what the sign says! The Ochopee post office used to be an irrigation pipe shed and was pressed into service for post office services after a fire in 1953 burned the Ochopee general store which housed the post office. It's been in service ever since. They serve three counties (!) and get stamp collectors and people from all over the world wanting a postmark from this itsy bitsy teenie weenie yellow--er, white post office. (That's an obscure reference to the song, Itsy Bitsy Teenie Weenie Yellow Polka Dot Bikini for the youngsters reading this blog!) Where is this little P.O.? In Ochopee, FL, of course! (Three miles east of the intersection of Highway 41 and 29.) We stopped and took a photo of it on our way back from 10,000 Islands National Wildlife Refuge....wow, now THAT is a beautiful place!

It's in the Everglades area and it's gator and bird country. Thirty-five thousand acres of refuge....2/3 of it are mangrove forest...the rest of the refuge is marsh and ponds...and there's a tropical tree there called the gumbo limbo. I just love that name! There are tons of shore birds and wading birds to watch and of course, the gators....there is a short walking trail here and this is where we saw this alligator, just off to the side in a marsh....We saw a duck with a red bill, not sure what kind it was but it was interesting. I love the water patterns and the reflections around this duck....it looks like some kind of style of painting and I didn't do a thing to the photo! 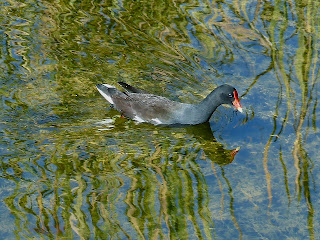 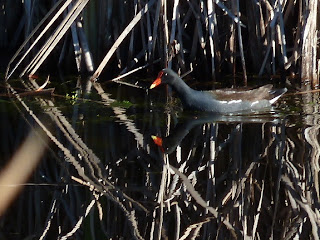 Here's another interesting (?)  same kind of duck photo...the reed reflections caught my eye. Because we were on highway 41 coming back from the preserve, I told Eldy, let's watch for alligators again...in about the same spot along the canal along the highway where we saw the four alligators together, we saw FIVE today. Sunning themselves and hoping for warmer weather, I'm sure! I didn't take a photo, there was a cop pulling over someone and we just thought we better keep going. It's not the best place to stop and gawk, that's for sure. We did stop further up the road and get this bad boy! See you later, alligator! 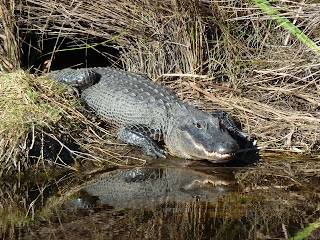 Posted by Jeannie and Eldy at 4:24 PM