Howard's Home IS his castle! 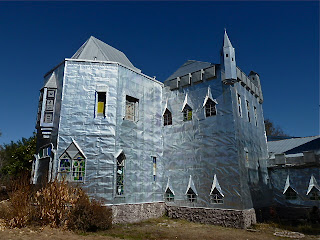 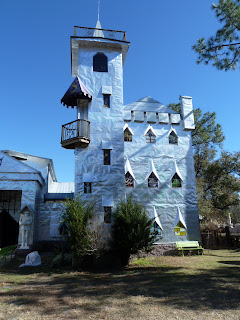 After reading about Solomon's Castle in Ona, FL on Nick's Blog and on the website Roadside America, we weren't that far from it, (about an hour) so we just had to check it out. If you have never visited Roadside America web site, you've just got to read about the crazy and weird things out there to see right in our very own country and probably in your very own state. Sometimes they are ugly, sometimes they are weird, sometimes unusual, funny or all four! Only in America can you see all this weird and wacky stuff!

Solomon's Castle is the home, workshop and galleries of a well known artist named Howard Solomon and is open to the public. It's not exactly easy to get there. Howard says he's so far out in the country that be sure you have a full tank of gas before starting out to come see his home and studio. The next thing he tells you is they are so far out in the middle of nowhere, you can arrive there by helicopter! 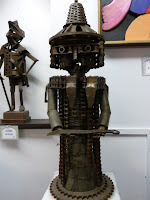 Where do I start? Well, Howard has been creating since he was 9 years old....he is now 75. Just about everything he has made is made from recycled parts of machines, discarded metal and all kinds of "stuff".  The castle's outside walls are made of metal printing plates. He's had different "stages" of creating where he focused on beer cans for awhile, (plenty of drinking jokes from the tour guide on that one!), brake shoes, oil drums, etc. There are over 80 original stained glass windows in the castle, of Howard's designs. There is a "Boat in the Moat" restaurant with good home cooked food. There's Howard's lighthouse as well, along with a gift shop. Not only is Howard quite the creative artist, he has the personality of a standup comedian. We didn't get the honor of having a tour with Howard himself, but our tour guide was so fast and furious with the one liner jokes and puns about Howard's titles for his creations, I couldn't remember any after we finished the tour! Lots of laughter can be heard as one tour after another goes through the castle, the titled creations are VERY witty! The tour guide even gave us a tour of the living quarters of Howard's castle. The kitchen wall was the only "plain" wall in the castle. Here it is:
Another one of my favorites was the "picture window" by the dining room table...tons of old Kodak cameras under a beautiful stained glass window of Howard's creation. Ta dump dum dum.... 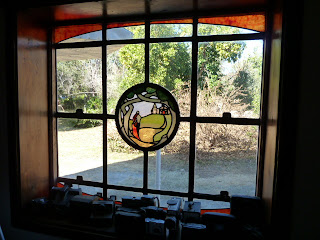 Not only is Howard an inventive and creative sculptor, he uses many different mediums for his creations. Howard has copied some of the great masters' paintings but done them in WOOD pieces. Here is his version of "The Scream". 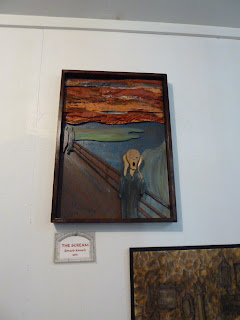 It was a VERY enjoyable tour today... 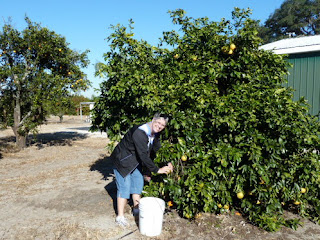 On the way home, we saw a "U-Pick--Grapefruits and Oranges"...had to stop for that one. In all the Florida driving we've been doing, we've yet to see a fruit stand with Florida's OWN oranges and grapefruits. So stop we did, and pick we did...we're in orange and grapefruit heaven right now..got my little $12.00 Proctor Silex juicer going every morning till we run out of fruit.  Location? Corner of Florida Highway 64 East and Cty. Road 675.  Cheers!

Posted by Jeannie and Eldy at 6:26 PM