Isn't this a beautiful photo of the gentle Florida giant called a manatee? Photo is courtesy of National Geographic, by Brian J. Skerry. Although they can be about 10 feet long and can weigh up to 1200 pounds, they are a graceful and gentle giant. 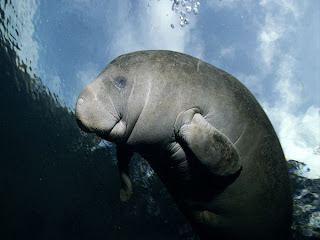 Yesterday I said you need to sometimes spend a little money on a tourist attraction to learn something new and get an experience you won't forget. Well, yesterday, we chose a tour that gave us the experience of a lifetime.....and some important knowledge I needed to know about where to kayak. I'm gonna be a little vague on what tour we did for reasons of my own.  Eldy and I went out on the rivers, lagoons, inlets and whatever else you call them to look for wildlife--gators, manatees, dolphins, birds...So far the gators have been covered, we were able to do that on our own without spending any money except for gas. We hoped to see manatees or dolphins....manatees we did see, at least 20 to 30 that surfaced and there were many, many more underneath us and all around us. We saw the "footprints" on the surface all over the place..they were popping up to breathe with little snorts everywhere! It sounded like lots of snorkelers blowing out their air hoses. What was really cool, was one of them had apparently been in captivity for care for an injury at one point, and he was used to people. This manatee came right up to us and wanted to be petted! So I did! He rolled over to get his belly scratched! His skin felt like a rough and slimy orange skin and he was covered with barnacles. He hung around for awhile looking for lots of attention. We saw a mother and her calf--that poor manatee mom is pregnant for a year, then nurses the calf for a year..so it takes awhile for the manatee population to grow with all the obstacles in their way---the gestation period, collisions with motorboats, habitat changing and disappearing, fish nets and lines, illness, etc. 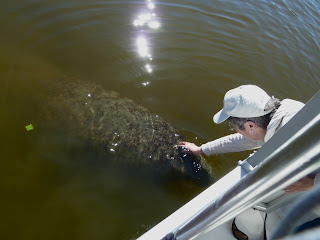 We learned a lot more about them....did you know manatees have fingers underneath their two front flipper skins? They have fingernails, too! They need to be in water that is warmer than 68 degrees or they can get pneumonia. They can live 60 years or more...Their closest relative is the elephant. I can see the resemblance, that's for sure. They can swim up to 20 miles an hour for brief periods of time. They eat about 100-150 pounds of sea vegetation a day...wow! That's a lot of "salad"! They are VERY intelligent mammals and have excellent hearing. 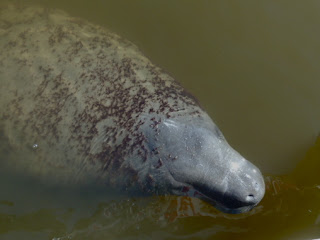 We also saw osprey, different kinds of herons and egrets. We were thrilled with our trip! One thing I did find out is that the area we were exploring (out in a marina and near some residential waterways) was hazardous for a kayaker. The manatees can easily tip a kayak over and the water was full of agressive bull sharks. We didn't see any, but that made me think twice about going kayaking by myself. I may be an experienced kayaker but I'm not knowledgable about Florida waters and water hazards. So when and if I do go kayaking, I will check thoroughly about sharks, etc. and just to make Eldy feel better, I will PROBABLY go with a guide. Thanks to a clarification from our trip yesterday, I found out that Manatee Park in Fort Myers would be a great place to kayak, no sharks! It was a beautiful, really great day yesterday and it is everyday with Eldo...we never know what the day holds in store.....see you later!
Posted by Jeannie and Eldy at 5:28 PM

Email ThisBlogThis!Share to TwitterShare to FacebookShare to Pinterest
Labels: manatees in Florida