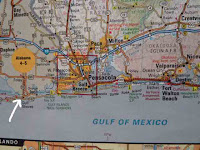 Where the heck is that? Eldo will show you...we're on Santa Rosa Island, a skinny little barrier island 48 miles long just south of Pensacola and southwest of Gulf Breeze, a small town southwest of Pensacola. Got it?  Just wanted to be sure! We're in the southwest section of the panhandle. Ok, enough of that silliness. We are staying at the Fort Pickens Campground run by the national parks system. The whole area is called the Gulf Islands National Seashore. The road out to the park/barrier island is very low to the water so it's subject to periodic flooding. Sometimes they have above average tides coupled with strong southerly winds and the main road--the ONLY road will flood. They say that it could be minor flooding and you could still drive your car through it, or major "overwashes", where you could get stranded in the park for a couple of days until the water recedes, and the park crew cleans up. Hm-m-m-m, very interesting! We didn't ask how often that happens...we're rather adventuresome that way! Right now, we see no signs of that, and they have quite the warning system to let you know when or if that might happen. 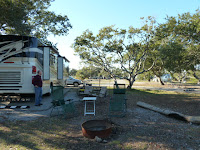 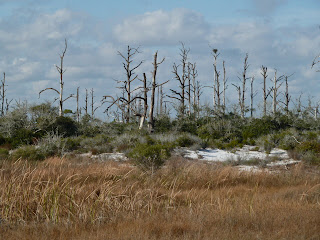 Our site was big enough that it could fit our 40 foot rig, but not a whole lot of room at the end of the pad for the car. You do have to drive around a bit to find something to fit bigger rigs, but their are spots available. There are five campground loops. No laundry facilities, but adequate showers. There is so much hurricane damage here, it looks kind of bleak. The plants are starting to come back, but there's no coming back for the hundreds of trees killed by the salt water of Mother Nature's ocean storms....there are hiking paths, or you can bike for miles along the road bike path running parallel to the beach.  The beaches are in great condition, they are snow white. If you bike along the main road, it looks like snow drifts alongside. I think they plow the road to clear the sand just like we plow snow back in the midwest.  We did see crews working to clean the beaches---quite a few of them. We've walked some of the beach and have not seen the oil on the beaches, so either the beaches weren't affected as much up here or they've made a tremendous cleanup effort to reclaim the pristine snow white beaches. We talked to a park ranger today and he said there was far more damage to the west, by Perdido Key on the National Gulf Seashore. He talked about after one hurricane they had to rebuild the road out to the campground, they got within two days of opening it back up when the second hurricane hit in 2005 and totally destroyed the road again. This area has really suffered not only from economy hits, hurricane hits but the gulf oil spill as well. But when you you see the area, it's really beautiful. Doesn't look like it's snowed down here? But that's the white sands with sand fences, just like we have snow fences back in Indiana. So I'll just have to pretend I'm looking at snow, unlike my friends back in South Bend, IN where they are predicted to get at least a foot or two of lake effect snow this weekend! I would say I wish I was there, but the joy of seeing snow and going cross country skiing or snowshoeing lasts a very short period of time up there. I do have to remind myself that I really got tired of shoveling my long driveway last year. I'll take this view any day!

Posted by Jeannie and Eldy at 3:17 PM