Off We Go Into the Wild Blue Yonder

The National Naval Aviation Museum at the Pensacola Naval Air Station in Pensacola, Florida, was just about the greatest and coolest museum we have seen in our lifetime. It is one of the largest air and space museums in the world. It's FREE, and it takes almost a whole day to take it all in, to go on a tour, to experience the Cubi Bar Cafe restaurant (artifacts from a real officer's club in the Phillipines during the War), to learn all about the vintage aircraft displayed there, and to watch some of the many informative video shows. There are IMAX films, four Blue Angels jets hanging from the ceiling, and many many other aircraft standing on the floors and suspended from the ceilings. There are more than 150 restored aircraft. The restoration jobs are amazing, the aircraft look brand new except for the bullet holes in some of them. Everything in the museum is real, 4,000 artifacts, there are no reproductions according to our guide. You can climb into cockpits, you can do simulation rides in an F-14 Tomcat....there are exhibit halls that show you life in the '40's, the effort made during the war back home to ration and save everything they could for the war effort, and all the "props" are really from the time periods they represent. There was a large exhibit of what the jungle camps were like in the Phillipines and other space exhibits of the early space capsules, astronauts and movies all about them. There were additional planes outside and much more to see, but they were in the process of moving some of the aircraft so we didn't see the planes outside or in the hangars there.The lighting in the museum is awesome, the WOW factor is a ten.  You can actually touch the planes on the floor that saw action in WWI and WWII. I touched one of the few remaining surviving planes from the bombing of Pearl Harbor. The atomic bomb container is there as well. It just looks like a giant egg! There are no barriers between you and the planes, no guard rails, no ropes...it was amazing! There is also a library there full of books and articles about aviation and a store to buy souvenirs of your visit to the museum. 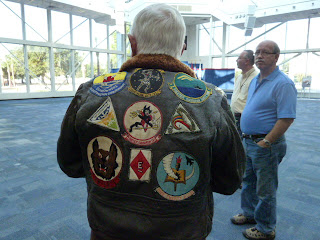 The first plane to cross the Atlantic is here, and the first one to cross the South Pole. We had a tour today with an elderly gentleman named Chuck Tinker, who served over 30 years in the military. He was a fighter pilot with many interesting and attention riveting stories to tell....He was what you call a "Tail Hooker" which is a fighter pilot who lands on the decks of aircraft carriers--you've probably seen how the fighter jet gets "hooked" by a cable and comes to a screeching halt by what looks sorta like a bungee cord. The "trap" brings a 26 ton aircraft to a halt in about 350 feet. He had over 1200 successful "traps" without a mishap, landing on the carrier decks--he is one of only about 100 pilots who own this distinction. He wore his original fighter bomber jacket which was totally decorated front and back with his achievements. He made the war stories come to life about these planes and jets. He told us that many of these planes and jets being recovered from the ocean floors are in such fantastic condition when they come up because they are aluminum. Years from now, the Titanic will totally be gone, but the Navy will still be pulling up and recovering these jets and be able to restore them to new condition because they are made of aluminum and not steel. He had personal stories about his friends and what they did in their jets, and what he did as a young pilot that just made history come so alive for us. He gave us intimate details of each plane and jet and after we were all done with the tour, we sat down and watched a video of the dogfights during World War II....it really helped us to see the different kinds of fighter jets beforehand to understand the aerial details of the fights....

The Blue Angels practice here...on just about every Tuesday and Wednesday mornings, you can watch them for free...Autograph sessions are after Wednesday's training, and they are free and open to the public. A new team was forming while we were here, so practice sessions were not going to be available for a brief period of time....if you get a chance to see this museum, don't pass it up and think, ugh--just another boring museum...WRONG! This is a fabulous, fascinating museum for people of all ages! There were lots of things there that would appeal to the kid in all of us and for families with children. We loved it and would come back to see it again....we learned so much today!

Posted by Jeannie and Eldy at 6:57 PM