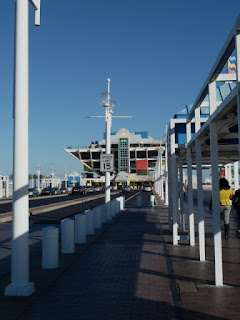 The day we went north to St. Petersburg to see the Chihuly glass, we saw a structure at the end of the pier in the harbor, called appropriately, "The Pier", overlooking Tampa Bay. So we decided to check it out. There were supposed to be some cool shops in there, five levels of 'em, an aquarium, and three restaurants. It also had an observation deck and some catwalks for fishing. As it was a cold day, we thought maybe there would be something interesting inside to look at. Just as any attraction is one thing to someone, it's something else to another, it's all a matter of opinion. We walked down to it and checked it out inside. It seemed to be an older shopping complex and kind of dated. There is an aquarium on the second floor, and it was quite small, so we didn't pay admission to go inside. The shops on the first and other floors were your usual tourist type shops--clothes, candles, crystal stuff and knickknacks. It's a small space for each shop, so when the main aisle gets crowded, there's not a lot of room to move either in or out of the shops. There are benches for seating so guys can sit down and take it easy while their gals shop. We ate a snack at the Cha Cha Coconuts Tropical Bar and Grill (love that name!). It was a family place and it was busy today. Food was good, great snacks! If you want a better place to shop, there are many beautiful stores out away from the pier on the main avenue around the museums and the harbor. They looked expensive, however! We are not shoppers, so we tend not to even go into stores unless it's an outlet mall and we are looking for something specific. Now, knitting and craft stores, that's another story as Eldy will tell you. It's hard to keep me out of them.

We got a kick out of this fortune telling booth, but didn't try it out. There is some movie jogging my memory that has this same Zoltar, the fortune telling guy in it, but I can't for the life of me remember which movie it is. If this looks familiar to anyone, please let me know....Remember the old photo booths that you would jam into with one or more of your friends and get your photo taken for a buck? (or less in the old days). They had one of those, too! Costs $5.00 now to do that...I almost dragged Eldy into the booth, but we were ready to go home. The next time I see one, we're gonna do it! 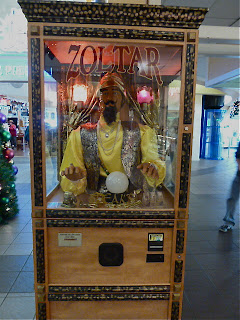 Tomorrow we are going to Solomon's Castle, an interesting anomaly in Ona, Florida. It's a castle in the middle of nowhere, built by a sculptor with a stand up comedy sense of humor. Thanks to Nick's Blog, and Roadside America for pointing us in that direction. We'll see you at the castle!
Posted by Jeannie and Eldy at 4:26 PM

Email ThisBlogThis!Share to TwitterShare to FacebookShare to Pinterest
Labels: St. Petersburg, The Pier