At last report, we were going to just take it easy today, trying to figure out something to do since it's so cold for Florida today...53 degrees...notice I didn't say it was too cold for me!  We decided to go explore further south in the Everglades City area and just check out some of the tourist attractions. I've heard of "Alligator Alley" and it's even on the map, it's a section of  I-75 as it starts to turn east. Sometimes the alligators are known to frequent the waterways beside the highway. You might be able to see one but you're traveling so fast it would be hard to spot them, I would think..At any rate, I was looking out the window as we were passing through a section of the Everglades thinking it was rather barren and uninteresting at the moment, and Eldy casually says, "I see an alligator." I'm thinking, oh, sure...he's jokin' with me. He said, "No, really! I saw one." I said, "WHAT?!! STOP THE CAR!!!!" And that means....Yep! Jeannie has to take a photo! Or two, or three or more....I've been a little grumpy as I haven't seen 1) dolphins 2) manatees or 3) alligators yet. Well, turning around was easier said than done...It's highway 41 south, two lanes at that point, and there just wasn't a good place to reverse...Eldy went a little further, then found a parking place to turn around...I started looking at the water filled "ditch" that was running along parallel to 41. I saw heron after heron after heron, (several different kinds), egrets, and just tons of different kinds of birds on branches, on the water's edge, fishing and waiting for the BIG ONE, and then----"I SEE ONE!....I SEE ANOTHER ONE!!! OMG, I SEE FOUR OF THEM RIGHT TOGETHER!" But we had to continue driving as there were people following behind us....So we pull off finally at a parking spot, and walk a  little along the guardrail and I got my photos of a couple of BIG ones. I tell my guy, "Eldy, we have to go find the four of them.."  Being the great guy he is, he doesn't say, "How come? You've got at least four photos of these guys already."  No, siree, he knows four at once would be the ultimate gator photo, and we aren't going to have to pay an arm and a leg to see 'em, it's FREE! So let's go find them! What a guy! And we did. Bless his heart, we drove back and forth along this highway, turning around at least three times to find these guys.....the only problem was, the sun was blinding the LCD display, so I couldn't focus on what I was seeing, but here's what we did see: 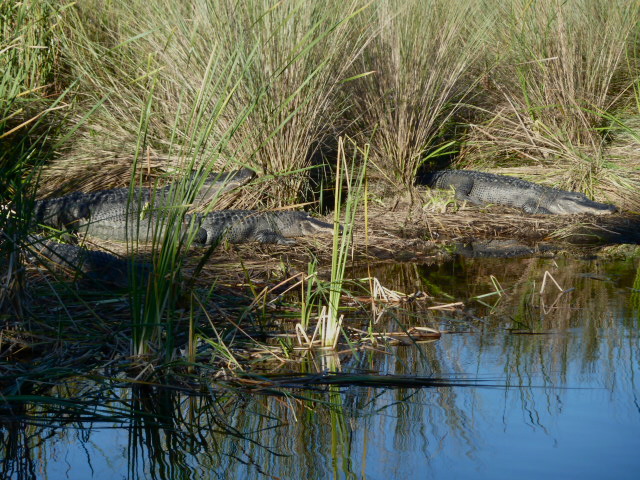 Cool! Tomorrow, we are going to see manatees, guaranteed or your money back! Yes, it's one of those touristy deals, but sometimes that can be a great learning experience and well worth it...we'll see you then!
Posted by Jeannie and Eldy at 5:35 PM