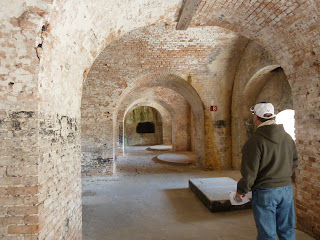 Back in the day, like in the mid 1800's, Fort Pickens was constructed to guard the Florida coastline from invasion. Back in those days, "homeland security" meant "defending the harbor." Harbor defenses would get the greatest and best weapons and technology of the time. Fort Pickens is the largest of four forts built to protect Pensacola Bay and its navy yard. It represents a link between the past and present, and it reflects the ever changing military defense and weaponry by the number of changes it underwent over time to keep up with the changing weaponry and types of defense. It was used from the time it was completed in 1834 until 1947. 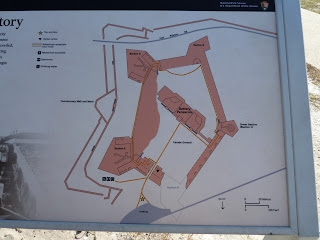 We went in to the actual fort today to explore, and it was interesting. You can take a guided tour or you can do the self-guided one. We walked around and marveled at the 21.5 million brick structure in the shape of a pentagon....we marveled at the engineering of the double arches or reverse arches which could withstand the weight of cannons on the second level as well as on the level right below. This design spread the heavy weight of the guns to minimize settling. Amazing what you can learn by actually going and seeing something historical! I didn't know that the Union had a fort this far south during the civil war. That was the only time this fort was engaged in battle, is what I understand.


Geronimo, an Apache warrior and a great leader, was kept prisoner here at Fort Pickens, along with a small band of other Apache Indians.....the fort is crumbling but you can still see the beauty of the brickwork and as you walk through the uneven floors, you are walking in the steps of soldiers and prisoners....what a way to make history become real instead of just reading about it! 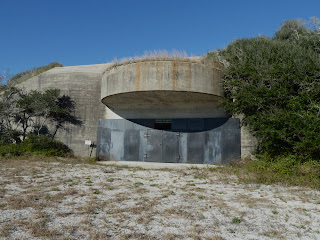 Remnants of the fort and its outlying batteries are scattered around the park like Battery Langdon, over by Langdon Beach. You can see the bunker batteries as you come into the park or when you go ride around. The guns on Battery Langdon are silent and gone, but the history remains. A soldier reported in their diary that when these guns were fired, the concussion would make the soldiers ears and mouths bleed...ouch! The 21 inch diameter guns could fire projectiles 17 miles out to sea. The sign by the battery says, "KEEP OUT"...What they don't tell you on the sign is there is a natural barrier to these former bunkers that would keep ANYBODY out these days and that is some kind of prickly plant. I call them "prickers", I have no idea what kind of plant leaves these sharp as needles stickers on you as you walk by, but they were extremely painful. They latch onto your clothing, your shoes and socks and go right thru all of that into the skin...eeowwwwwww! 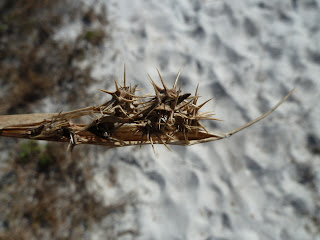 Being a former teacher, I know that schools are having to cut back on field trips, which is a shame..I think kids would enjoy this fort, although I'd have to say we are might be a little more motivated  learners because we chose to go here! We just did the self-tour, so I'm sure there's a lot more to hear about this fort if you took the guided tour. Afterwards, we had an interesting talk with the park ranger and another officer in the office as we were leaving. They were telling us stories about the Blue Angels and the fighter pilots landing at the base nearby. Do you know you can tell whether your commercial airlines pilot is a former navy pilot or an airforce pilot? A navy pilot will retract his wheels right away on takeoff (from many aircraft carrier takeoffs) but an air force pilot will leave his wheels down longer until well in mid air or so they say...just thought you might want to know. Tomorrow we are leaving Fort Pickens...It's turned cold here, going to get down below freezing tonight, so we're thinking we are going to pack up and head further south on Tuesday.....see you later!
Posted by Jeannie and Eldy at 6:41 PM