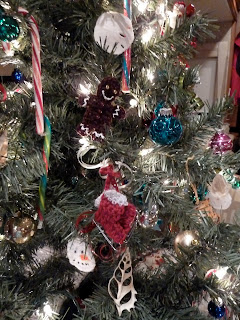 We are settled in....whew! Photos today are of our site, our tree and another typical site on the water...We managed to decorate a little for Christmas on the outside today, but we did not have the same kind of palms to wrap the lights on, so we had to try and decorate the palm bushes near the coach instead....got a little 4 1/2 foot tree for inside the house and since I couldn't find my tabletop tree with the ornaments the last time I went into the storage shed, we got a new tree. I ended up crocheting some new ornaments and using Florida shells this year...I think it looks kind of cute! I found a pattern for a crocheted pair of skates using jumbo paper clips, a pattern for a gingerbread man, and a pattern for a snowman face. These were the perfect size for a smaller tree. Then I hit Kelly's Shell Shop in Naples for some slices of sea shells and sand dollars and I think they make GREAT ornaments for a truly Florida tree. Now all I need is some pink flamingoes! Not really, just kidding on that one! One of my other favorite things to do to make a tree look more sparkly, is to take metallic curling ribbon, curl the pieces and just throw them on the branches...voila! An inexpensive Christmas tree!

Being that it's just the two of us this year, Christmas Eve brought back lots of memories. Last year at this time, we went to a local bar in Tiera Verde with my oldest daughter who was visiting us. We stumbled upon a local tradition that had been going on for over 30 (?) years, that of sing along Christmas carols with a great piano playing maestro. It was really fun!  I wish I could remember the name of the bar. I think it was Billy's Stonecrab Restaurant.  However, this year we just stayed in and tracked Santa for awhile on his journey on the Norad web site. What a  great site for kids and their parents...Here's how that tradition got started a long time ago...Boy, how times have changed!


On Dec. 24, 1955, a call was made to the Continental Air Defense Command (CONAD) Operations Center in Colorado Springs, Colo. However, this call was not from the president or a general. It was from a girl in Colorado Springs who was following the directions in an advertisement printed in the local paper – she wanted to know the whereabouts of Santa Claus.
The ad said “Hey, Kiddies! Call me direct and be sure and dial the correct number.” However, the number was printed incorrectly in the advertisement and rang into the CONAD operations center.
On duty that night was Colonel Harry Shoup, who has come to be known as the “Santa Colonel.”
Colonel Shoup received numerous calls that night and rather than hanging up, he had his operators find the location of Santa Claus and reported it to every child who phoned in that night.
Thus began a tradition carried on by the North American Aerospace Defense Command (NORAD) when it was formed in 1958. Today, through satellite systems, high-powered radars and jet fighters, NORAD tracks Santa Claus as he makes his Yuletide journey around the world.
Every Christmas Eve, thousands of volunteers staff telephones and computers to answer calls and e-mails from children (and adults) from around the world. Live updates are provided through the NORAD Tracks Santa Web site (in seven languages), over telephone lines, and by e-mail to keep curious children and their families informed about Santa’s whereabouts and if it’s time to get to bed.
Each year, the NORAD Tracks Santa Web Site receives nearly nine million unique visitors from more than 200 countries and territories around the world. Volunteers receive more than 12,000 e-mails and more than 70,000 calls to the NORAD Tracks Santa hotline from children around the globe.
This year, children and the young-at-heart are able to track Santa through Facebook, Twitter, YouTube, Flickr, and TroopTube.tv.  To follow us on any of these Web sites, type in @noradsanta into the search engine and start tracking.
NORAD Tracks Santa has become a magical and global phenomenon, delighting generations of families everywhere.

Merry Christmas everyone! Have a wonderful holiday season and a Happy, healthy New Year!  Eldo and Jeannie 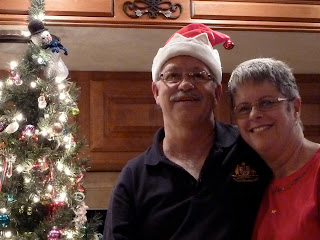