Wel-l-l-l....it's less crowded than Wells, Maine, where we came from. It's about 21 miles to the Acadia Visitor's Center. It's about 27 miles to Bar Harbor. It's out in the boonies outside of Ellsworth, about 10 miles out. No close shopping nearby. Not too much traffic on the highways going and coming to get to Ellsworth, but LOTS of traffic the closer you get to Bar Harbor. We like that there is far less traffic where we are. It's a quiet campground, we like that, too. It's shady in many sites, but the trees are NOT a problem. AND--there's a BIG pond (Patten Pond) for kayaking. They rent kayaks--sit ins and sit upon at this park so you can go out and paddle all you want for a very reasonable price! There's a tiny little beach for swimming. 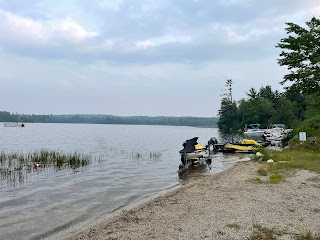 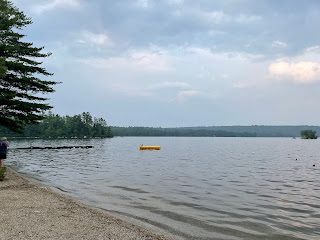 Do we like the campground? Yes! The staff does a great job maintaining the park. They are on top of the mowing and servicing any problems. It's a small park, about 213 sites and they are fairly close together, so sites for big rigs like us (41 feet towed with a big dually truck) are limited. Class A motorhomes, (the "big box" kind of RV that can unhook their car, THEN drive around the campground, have it a lot easier than we do.) We are about 65 feet long as we tow our RV behind us and we have to stay hooked up to do the looking around when we get to campgrounds to find a suitable spot/site unless we are given one by the campground. 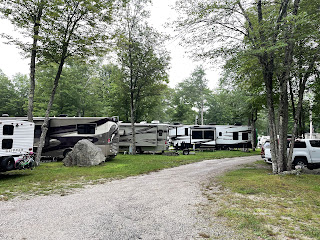 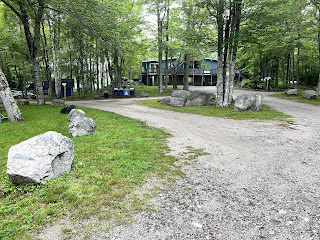 We were given a suitable site by this particular park which was really nice, because there are a LOT of boulders in the park. It's not easy driving the fifth wheel around all the boulders that mark the roads, mark the sites, and cleverly mark the electrical boxes so people won't hit them with their rigs! Plus there is a lot of turning to maneuver around the campground, so be careful if you come to the park! 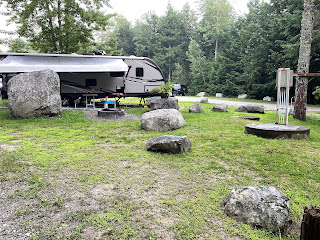 The drawbacks--there aren't any great hiking trails close by. You have to drive to Acadia National Park to find a good hiking trail. There are a few more in the area that are not in the national park in the area, but it's at least 10-20 miles to get to them if you don't want to hassle with Acadia crowds. There aren't any good bicycle trails nearby. You can find ATV trails more easily than bike trails. HOWEVER, Sparky is still researching a couple of things that were mentioned in the glossy photo literature that always captures the imagination and tends to be a little exaggerated sometimes. If the statement about trails and hikes needs changing, you'll be the first to hear it right here! Sparky has been checking out Rails-to-Trails and All Trails and other sources, too. In the meantime, the first nice day, Sparky is going kayaking!

The RV sites are dirt and gravel, more dirt than gravel where we are, so when it rains, which it has been doing a LOT this late July here in Ellsworth, they are muddy and messy! Sparky wants to get a cute pair of rain boots for muddy campgrounds! We're glad our site is marked with boulders on the side so nobody will run off the road and into us 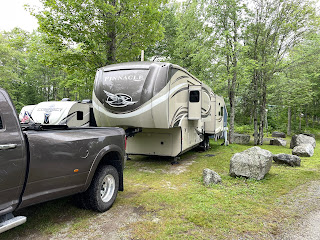 because we are right at the edge site of the park exit AND the dumping station. (It hasn't been too bad, says E.) The dumping station is where people dump their sewage holding tanks into a central location in the ground before traveling to another destination, just in case you were wondering what a dumping station is. The smell DOES carry sometimes, we've noticed, but it doesn't last long. Thank goodness!

Because we are so big and it's peak camping time, Thousand Trails Patten Pond did not have a 50 amp site available that was big enough to hold us, so we have a 30 amp site. This means we can only run ONE AC, (we have two) which is ok, because temps are in the seventies during the day, and sixties at night, BUT we have to watch which appliances run at the same time to avoid circuit overloads and tripping the breaker at the post. We have a list that we refer to occasionally, lest we forget how many amps all our "stuff" uses, but most of the time, we know how to manage our electrical load so the circuit breaker won't trip. Here's a link for RVers if they'd like to check what they have and it's electrical demand: https://www.lilacresort.com/appliance-amperage-draw-chart/

What have we done since we got here? Well, we drove to Bar Harbor one day when the weather was nice, in our big dually truck. It was just as we remembered every July that we have visited cute and quaint and beautiful BUT--super busy, heavy heavy traffic, and driving the dually thru town reminded us of the first time we came to Bar Harbor and Eldy almost had a heart attack. The GPS guided us in our first motorhome WITH THE CAR IN TOW down the main streets of Bar Harbor on July 4th. Little did Sparky know, there were TWO streets of the same name and the GPS gave her the wrong one. Eldy kept saying, "This CAN'T be right!" over and over, and Sparky kept saying, "That's what the GPS says!" We were crawling through the center of town with cars parked on both sides and it was SCARY. We were new at driving an RV with a car in tow. We thought someone would hit us or we would hit them, but we didn't. Today was almost the same. We saw a parked dually truck with the driver's mirror smashed into the side of the truck. That was it for Eldy, and back out of town we went. Parking is a nightmare in downtown Bar Harbor and even more so for a really big truck with big fenders like ours. It would be better to take a trolley next time or park just outside of town on a side street up the hill and walk back down to town. We HAVE to try lobster Mac and cheese for Eldy. There is a restaurant in Bar Harbor that has the most amazing lobster Mac and cheese ever!

We were going to stop by the visitor's center as we came into Bar Harbor, but at 10:00 in the morning, the line was already out the park and into the highway waiting to drive in. It's so crowded at Acadia, you have to have a scheduled time to go to the top of Cadillac Mountain! Hope the trails are not like that! Maybe if Sparky picks a really difficult trail, it won't be too crowded. (Maybe if Sparky picks a really difficult trail, I will be having to call the ranger because she ran into problems! says a worried Eldo.) He worries too much, me thinks.

Ellsworth is going to be a quiet, not too eventful a stay we think, and that's ok...Sparky hopes to get in a hike or two at Acadia IF we can get to the visitor's center really early when they first open. So for now...we will see you again next time. Thanks for reading along....

Posted by Jeannie and Eldy at 7:46 PM