It took some research, but there IS a bike trail that picks up here in Ellsworth and is part of the Eastern Greenway. It's called the Down East Sunrise Bike Trail. It's a multi use trail connecting eastern Maine and the East Coast Greenway. Sparky has been on parts of the East Coast Greenway Trail before and found the trails to be sporadically off road and on. The Sunrise Trail sounded promising but reviews had said the trail is shared with ATV's and they cause the trail to be rough and rutty, being it's an unpaved rail corridor. It's 87 miles long and the longest off road trail on the East Coast Greenway. It's open to bicycles, walking, horses, cross country skiing, snowmobiles and ATV's, and the occasional dog sled, haha.

You can pick up the beginning of the trail (at least the Ellsworth connector) behind the Comfort Inn in Ellsworth. Sparky parked behind the LL Bean outlet store next to the Comfort Inn and took her bike up the steep quick hill to the trail. This ain't so bad.....Hmmmm..it's level, it's flat, no ruts so far. 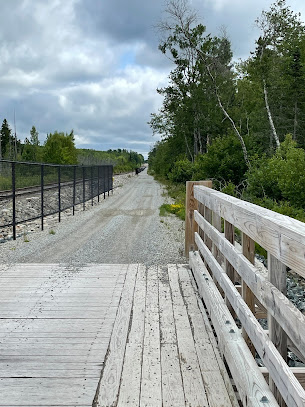 Almost immediately, a marsh/wetlands follows with signage marking the significance of the area. 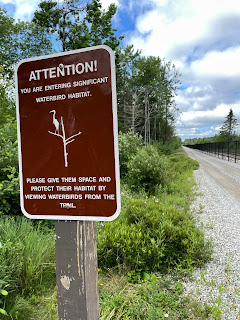 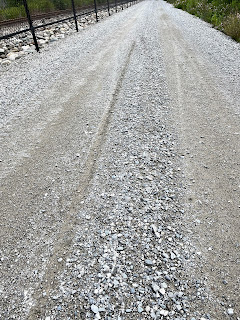 The trail is a packed sand/dirt/gravel fairly level path for about 3-4 miles. Then, grooved lanes started where ATVs have worn packed wheel paths. As long as you stay in the grooved wheel paths, it continued to be ok, with a Trek hybrid bike, it was OK. The scenery improved immensely, and Sparky started passing pond/stream/river after river and quite a few bridges.

The trail follows some railroad tracks for awhile and you pass by the Downeast Scenic Railroad station with some old train cars in the yard. 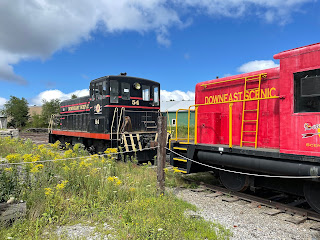 Then the trail gets interesting... Bridges, crossings, marshes and ponds, oh, my! 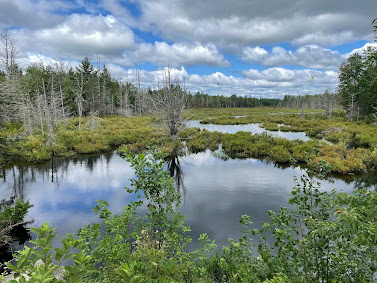 Sparky was hoping to see a moose out and about. The marshlands were perfect moose habitat, and people have seen moose on this trail before. 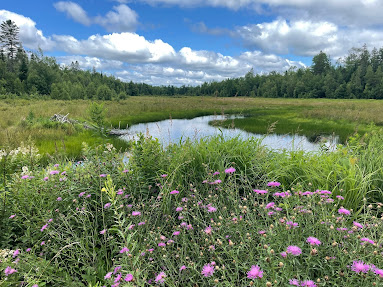 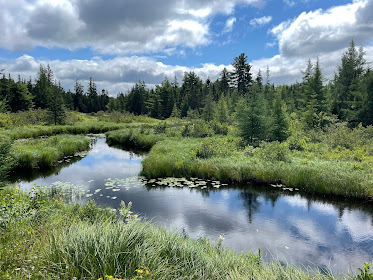 About six miles into biking, the trail started getting rougher. The gravel became bigger, and due to lots of recent rains, the trail was a little softer in spots. The gravel pieces were bigger, and Sparky started feeling the rear tire slip and slide. Not fun! Miles 6-8 got worse with deeper ruts, and mushier soft spots and some potholes. Yuck! 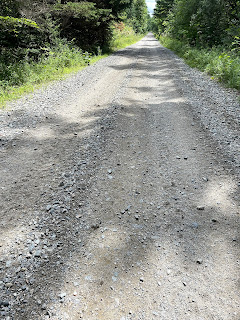 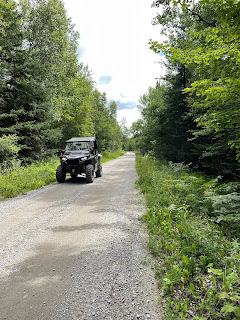 Sparky started being passed by ATV's, six total during the bike ride today. They were driving responsibly and slowed down as they passed, which was courteous. Sparky has always wondered why the fascination with ATV's. They are loud and noisy, and the likelihood of seeing nature is greatly reduced. BUT--It would be fun to ride some trails, if seeing wildlife is not the goal, so we might just do that sometime!

On she went, and around about 10 miles, the trail got so soft and deeply rutted, that it was no longer fun trying to keep the bike upright and enjoy the views, so Sparky decided to try to go a little further, and made it to 12.5 miles one way. Then she turned to go back. On the way back, more fabulous scenery repeated....AND--a BIG doe was spotted around a bend trotting along the trail! 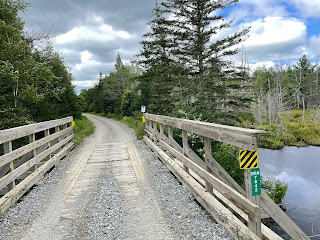 Sparky got ready to take a photo with her phone, but two bike riders were coming the other way. She saw the doe stop abruptly in their direction, then turn and start running TOWARDS Sparky. Sparky was just trying to get the phone ready, when the doe saw her, EEK! and turned abruptly and bounded right off the trail into the woods. Too late. Rats! But it was a big beautiful doe, that's for sure, and something you don't forget! Even if you don't get a photo, it's captured in your mind.

A beautiful ride today, 25.7 miles round trip, and Sparky will probably  do it again. It's worth the rough gravely trail to see nature's beauty in Maine. It's really spectacular! Sparky DOES recommend a hybrid or mountain bike for the trail, though. Eldy's Trek Dual Sport bike is great for these types of trails. It's a hybrid with a suspension fork on the front--good for rough trails.  It has great, puncture resistant tires on it. They've been holding up really great! (Sparky is glad about that because she doesn't know how to change a bike tire on the trail!) Guess she better learn, and take an extra tube along with her.  That's it for today....see you later!

Posted by Jeannie and Eldy at 1:43 PM