We are on Day 4 of our stay in Alaska. If you missed part 1, you can view it here on Blogger. The weather continued to be rainy and cold, but we were having a blast. Jeannie's words almost every day were, "OMG"...."OMG".....We were so happy she was loving her visit. she was a fabulous traveling companion and very flexible. If we had to change plans or switch gears, she was right there with us.

Day 4--We were headed to Valdez. We had run into a problem. Eldy was feeling sick. We made a fast trip by the major falls headed into Valdez and got a few photos. The drive into Valdez, through Keystone Canyon, is AMAZING! Waterfalls after waterfalls cascading down the cliffs. Even though it was raining hard, it still was so beautiful. 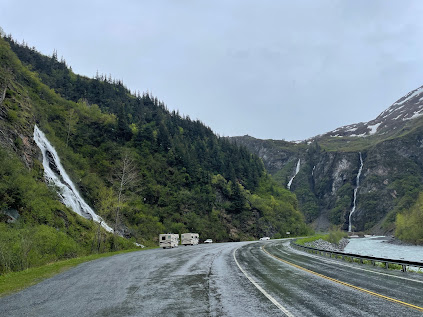 We landed at the Bear Paw Resort in downtown Valdez almost right on the waterfront. We had stayed here before and loved it. Site 10. It's basically a gravel parking lot, but you don't care, it's Valdez and you have the most amazing views right outside the park. It is spectacular, is it not? This is right outside our campground at the harbor, right in town. 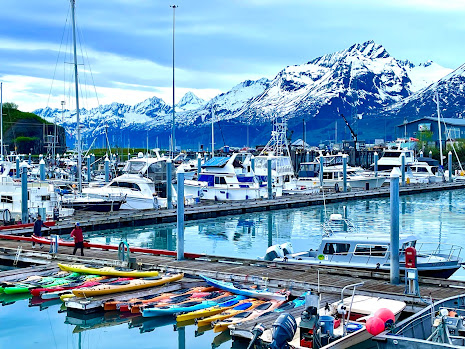 Eldy continued to feel worse. It was obvious we were going to have to find a doctor or an urgent care center. By this time we were headed into Memorial Day weekend, and in Alaska, the stores close for the ENTIRE HOLIDAY WEEKEND THRU TILL TUESDAY. There was NO PHARMACY open within many miles. The only pharmacy there was was closed till Tuesday. There were no urgent care clinics open. The only solution was to go to the emergency room of the local hospital in Valdez and pay an astronomical fee even with insurance to get seen by a doctor and get antibiotics. Sparky called the hospital, explained the situation and low and behold, a wonderful doctor who just happened to own the clinic next door, listened to all his symptoms and our predicament about everything being closed and said, yep, you need an antibiotic. She could sell the antibiotic at her cost. We said bless you! and Sparky hoofed the 10 blocks to the hospital, (we couldn't unhook the RV easily in the park and just go drive and get meds!) The nurse met her at the door, and we got the meds we needed for Eldy and Sparky got her steps in for the day. (And some brownie points says a grateful Eldy.)

Day 5--We are still in Valdez and it's time to go for a glacier/whale watching cruise on the Lulubelle, something we had done before and found to be fantastic. Eldy was on meds and too sick to go, so Jeannie 1 (Sparky) and Jeannie 2 (Sparky's friend) headed out on the Lulubelle with Captain Fred. The next series of photos are from the Lulubelle cruise. Sparky couldn't resist the Titanic pose after she started seeing icebergs. 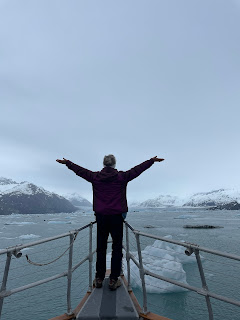 Captain Fred is now in his 80's but still captains the most beautiful boat for seeing wildlife and glaciers out of Valdez Harbor and Port William Sound in Alaska.

He is a wealth of fascinating knowledge about marine wildlife, the oil industry and he pretty much discusses all of it over a 7.5 hour voyage, which can easily extend longer if he sees lots of wildlife. Captain Fred will get you up close and more personal than any other cruise ship in the area because his boat is a little smaller. This is a sea cave and we thought we were going to crash into the side of it! Jeannie doesn't look too worried, does she!? 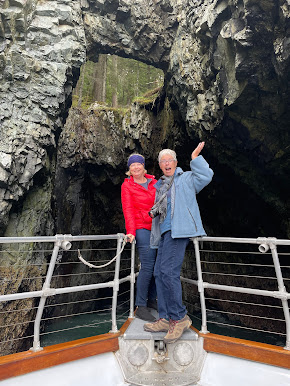 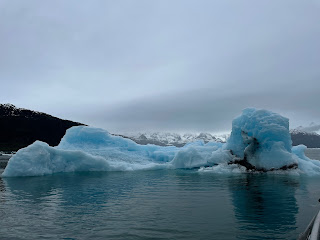 This trip is a MUST for anyone visiting Valdez. There are a couple of other options in the area for seeing the glaciers and marine life, but we love the Lulubelle. The other cruise does not extend their time, it's a set time schedule and they head back when it's time. But not Captain Fred--if we are seeing wildlife, he stays out longer. 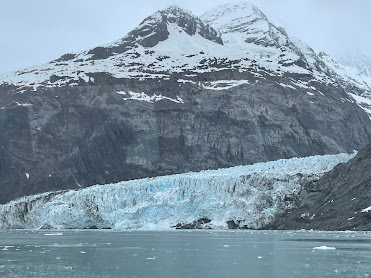 We saw two orca whales, Stellar sea lions, Dall porpoise, eagles, multiple glaciers, whales and speaking of whales, Sparky got the most lucky shot of all time--a humpback whale's mouth opening while feeding. All Sparky remembers is the captain saying, "He's going to open his mouth, get ready for it, here it comes...." and she just hit the camera button and this was it. She never saw the mouth in the viewfinder. Shot of a lifetime. Sparky is posting it through the camera viewfinder because she hopes it won't get stolen that way. 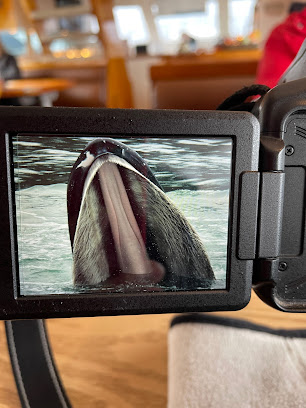 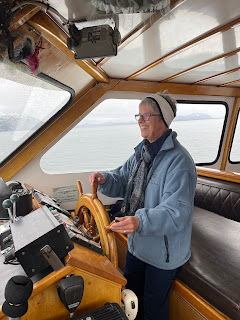 At one point, the captain asked if anyone wanted to drive the boat, and of course, Sparky and Jeannie both did! It was a lot harder than it looked to keep the boat straight on course! We returned from the cruise tired but exhilarated from our cruise today. Eldo is on the mend, yay! Tomorrow we get ready to leave Valdez to head to Fairbanks but not before visiting a couple of cute little places before we go. We just had to have breakfast at the Potato down at the harbor...a breakfast burrito for Sparky and and an egg sandwich for Jeannie....see you later! 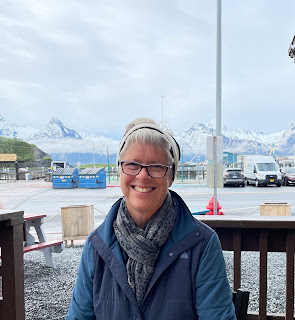