Here we are getting close to the end of our first week of our two week stay in Alaska, and are we getting the views and the experiences we will never forget! 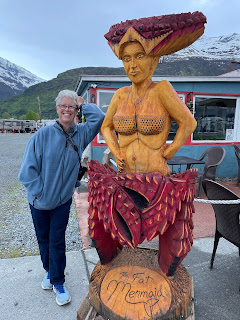 Forgot to mention that Valdez is a cool little town. Yes, it's for fishermen and whale watchers and kayakers, but there are cute little shops and restaurants there, too. We love the Fat Mermaid's sassy attitude, but we didn't eat there. You can see that the weather is cloudy. Yep. It was cloudy, chilly and rainy while we were there, but we still loved it! Love this Alaskan tee in the window. Pretty accurate in some Alaskans' opinions. 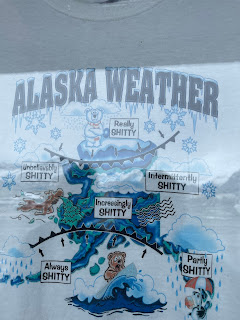 If you want to try kayaking, there are outfitter shops in Valdez. Guess you can kayak up pretty close to a glacier. They boat you in, and off you go in a kayak. Sparky says, "No, thank you!" Too cold, too risky with glaciers calving (splitting off big chunks) and she still remembers the time cruising where a giant slab of glacier broke off (bigger than a house, the captain said) and it crashed into the sea, causing a wave that rocked THE ENTIRE CRUISE SHIP. But guess outfitters are aware and knowledgable about those things and won't let you get THAT close! 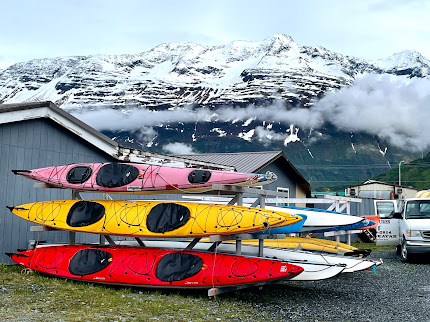 Day 6--An early breakfast and a juvenile bald eagle posing at the docks. 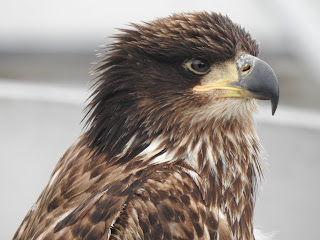 We go to leave Valdez, heading north again, and the sewer cap is stuck on the rental so bad, we can't get it off. Sparky tries WD-40. No dice. The hunky college dude in the next rig over can't get it off. A guy and an old man couldn't get it to budge. We get tools from the office and try to tap with a hammer and wrench with a wrench to get the cap off. Nope! Finally, Sparky asks one more beefy guy for help, and he gets it unscrewed like it's nobody's business. Geesh! Note to self: Road grit gets in the screw cap threads and becomes like cement. Keep sewer cap threads clean on future road trips in Alaska!

We head out, heading north, and drive most of the day. We boonddocked (no hookups) at the Gulkana River Spawning Viewpoint at MM 190. Jeannie and Sparky thought it would be fun to get the chairs out and have happy hour, so we did! 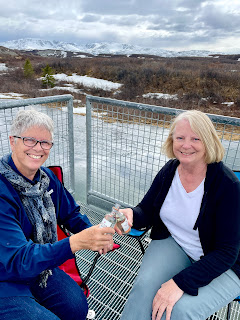 Day 7--We got to see the pipeline up close and personal as we were driving. Sparky and Eldo are always amazed that you can walk right up to the pipeline. You can touch it, you COULD try to climb it, but you are not supposed to. No alarms go off, no fences, it's right there. 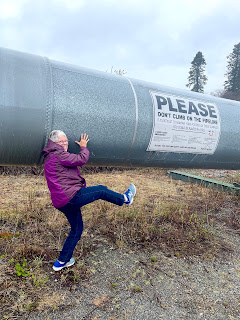 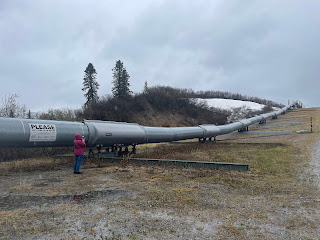 There are LOTS of placards at the mile marker (MM) stops along the way--teaching you all about the pipeline. Sparky wrote about the facts in previous Alaska blog posts, but it is truly an engineering work of art how it was all completely privately funded, not a single taxpayer dollar went towards this project, and how the engineering of it keeps the pipeline from breaking up during earth tremors, of which there are an AMAZING number of occurrences in Alaska, you just never hear about them. As a matter of fact, there was an earthquake in Anchorage a few days after we had left there, and the residents were so blasé about it, it was kinda funny. Sort of like Floridians having hurricane parties....(SPARKY! STAY FOCUSED! reminds Eldo.) OH! Right...the pipeline...it has different kinds of construction depending upon whether it's above ground or below ground, whether it's on permafrost or tundra. You just gotta go back and read about the pipeline, it's really cool! 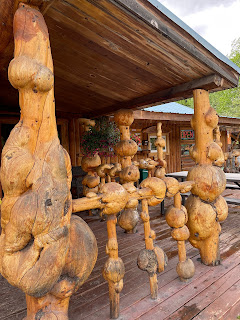 We saw a cool HORIZONTAL rainbow in a valley while driving, (we were so high up in elevation that the rainbow was beneath us) and we stopped at the Knotty Shop in Salcha, AK. It's constructed out of many burled beams and it's all wood. Don't miss it! Everything Alaskan, great ice cream, wildlife displays and outfitters' stuff. It's like a mini Cabelas. AND--we saw our first moose off to the side of the road. Eldy was in the lead vehicle, he saw it first. It took a week, but at last we saw one! No photo this time, but the moose photos are coming, just you wait and see! (And the moose poop photos, laughs E.)

We stopped for the night at Riverview RV Park in North Pole, Alaska. Very nice park, spacious sites and 55.95 for one night. We pull into our sites, side by side, and Jeannie's site has MOOSE POOP in the site lane! Woo-hoo! Moose frequent the area! Sparky is so excited to see this!!!! (She's a little "different", explains E. Hmmmm...Maybe that's why she was a special ed teacher for so many years?) Maybe..... 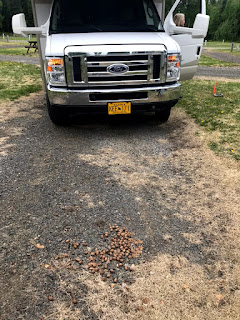 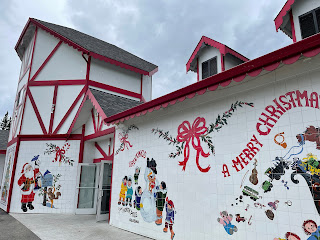 Sparky LOVES that North Pole town. All the street lamps are decorated in red/white trim, and all the street names are Christmasy. We stopped at the Christmas shop in town. It's great...beautiful ornaments and decorations (we bought a few) and you can purchase a postcard and mail it to your grandchildren from the North Pole (!) AK, so Sparky did that, too. 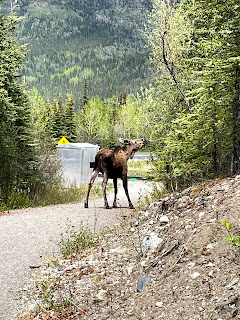 Day 8--We head to Denali National Park, passing through Fairbanks. It's 125 miles from Fairbanks to get to Riley Campground at Denali National Park. Sparky takes a hike on the McKinley Trail and takes the bike path on the way back. A young MOOSE is standing smack dab in the middle the bike path around the bend, munching on the bushes! Sparky waits him/her out and the moose moves on after about 15 minutes, tired of the gathering crowd in the front of her and the backup behind her. Yikes, she was CLOSE! But paid no mind to anyone around her, she was just hungry! You never know where you will see moose in the park, but you will see them! We ate dinner that night at Prospector Pizzeria and highly recommend the super friendly staff and fabulous pizza--AND the decor! We decided to go for an evening drive out to Savage River, the furthest you can go in your own vehicle unless you have special camping privileges further into the park. We saw another moose on the way back, a very pregnant one!
Day 9--We attempt to get all three of us booked for the Denali National Park wildlife tour that lasts for about 7-8 hours on the bus, the Tundra tour. It's heavily booked and no seats available until two days from now. We decided to extend our stay at Riley Campground so we can take the tour. It's a fantastic tour and not to be missed. Denali National Park has restricted their tours and resumed a few since Covid is easing, but the buses are fully booked on all the tours available this early in the year anyway! We snag three seats for Saturday and we extend our stay at Riley without a problem. Just so you know, Riley Campground is totally boon docking, NO hookups. But since the rental had a generator and a full tank of water, we were in great shape!
We will tell you all about the tour next time...it almost deserves an entire blog post, it's so cool! Bye for now.....