Last Few Days at Moody Beach and a Tesla Experience

Well, we've been in Wells, Maine for three weeks. There were good things about it and not so good things. Sparky won't harp on the narrow streets, the 8 mph traffic most days crawling on highway 1, the main road through Ogunquit, Wells, and other northern ports, nor how hard it is to park a BIG dually Ram truck in these cute, quaint little New England towns. Nope! She'd rather mention her last beach walk, a whale watch tour and a delightful day before her 71st birthday celebration with some of her family.

Sparky loved her morning walks on the beach...She did one walk at Laudholm Beach/Drake Beach one morning. This is in the Wells National Estuarine Preserve. The Wells Preserve is a research facility on marine life and is open to the public as an educational resource and has some really cool educational programs. It also butts up against the Rachel Carson National Wildlife Preserve. 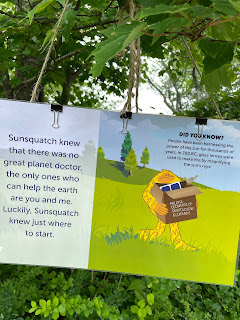 As Sparky was driving in on a VERY hot day, (it was 92 that day), she was planning to take an in-the-shade walk on the forest trails on the property. The trails vary from .6 to a little over a mile. She WAS going to take a hike in the woods until she saw a summer school group of about ten kids, and FOUR of them were wearing mosquito hat head nets! The ticket booth (6.00 entry fee) to the preserve, was selling THREE kinds of mosquito spray repellent. 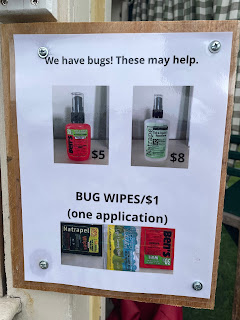 Scratch the woods hike and head to the beach! She got eaten alive by mosquitoes heading down to the beach, but once there, they dissipated. There was a great children's story about Sasquatch and nature on placards attached to trees to make the little hike down to the beach interesting for kids. It's great to see nature inspired lessons for our future generations. Sparky was like a little kid, moving from one story panel to the next, reading what Sasquatch learns, while swatting the mosquitoes away. 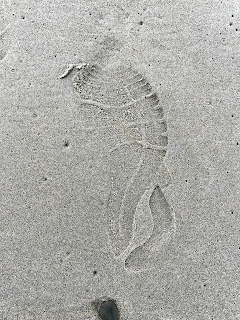 Sparky loves all the things you can see if you look closely while walking the sandy beach. Like footprints, kinds of shoes that leave the footprints, sizes of footprints--a podiatrist would have a field day analyzing the gait, the deep impressions on one side of the foot or the other....Some people have REALLY big feet! (Sparky finds interest in the darnedest things, explains Eldo.)

Like rocks, too! Anybody who's a rock hound would puzzle at these unique rocks....how they formed.... 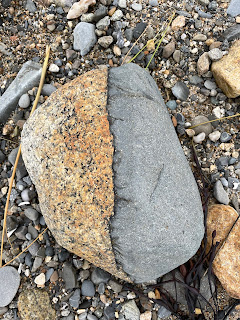 Laudholm Beach/Drake's Beach was a VERY different kind of beach...LOTS of rocks and boulders in one section. People were scrambling over the rocks looking for tiny little forms of marine life, they were in a class offered by the preserve to learn more about tide pool life. Cool! 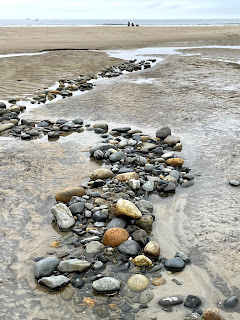 Kids were having a blast playing in the sand. The mom gave permission to take a quick photo of her sons doing what all kids eventually do to their siblings or friends--bury them in the sand! 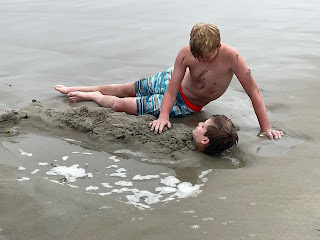 Parts of the beaches have lifeguards, and then sections of them don't. People populate both areas and don't seem to worry if there isn't a lifeguard. The water temperature at the beaches near Wells seemed to hover between 59 and 67 degrees. Refreshing! But Sparky has not gone swimming in the ocean--yet! 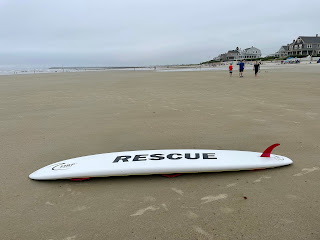 Sparky and Eldo decided to do a whale watch out of Kennebunkport, Maine. It was called First Chance Whale Watch. A 4.5 hour trip out on the ocean. It gets very good ratings on Trip Advisor and for the two adults it was about a hundred dollars. Unfortunately, the ocean was a little rough that day...just enough swells to make Sparky queasy. So she stayed outside the interior cabin and tried to watch the horizon. That helped! 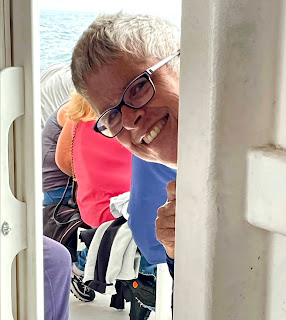 Sparky thought these people were just sleepy from the strong ocean breezes but Eldo said most of them were using brown paper bags at one point or another. The captain cautioned us at the start of the trip not to lock yourself in the bathroom for 45 minutes like someone did on the last trip out. 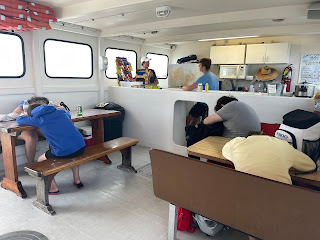 Did we see any whales? Yep. One dead Minke whale. It was gross. The sharks had been feeding on it. The captain said there had been a great white shark feeding on it, but smaller tourist boats in the area observing the dead whale were keeping the sharks at bay. We didn't see any sharks at the site, that was probably a good thing! We did see a fisherman land a nice sized tuna. Sparky saw the tail and a lot of thrashing around going on, so she didn't really get a good photo.

What's nice about the tour is that if you don't see any whales, you get a voucher that doesn't expire to go out again with the same company, so we got a voucher for another day. We will do that because we will be returning to Moody Beach in two weeks for another three week stay. It was great to be out on the water on such a hot day! Had to be about twenty degrees cooler out on the ocean. Great trip, great staff on board. 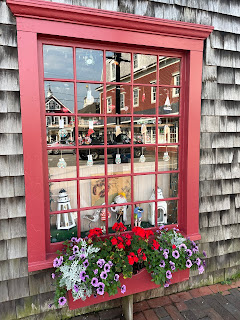 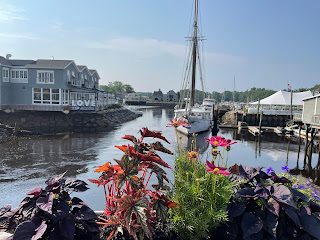 Kennebunkport is a cool little seaport. Lots of interesting shops, narrow streets, (hard to find parking) with some good restaurants. Sparky and Eldo ate at the Pilot House, a tavern right outside of the whale watch tour boat dock after getting off the boat. Eldo said it was THE BEST fish and chips EVER! Sparky LOVES these New England harbor towns..... 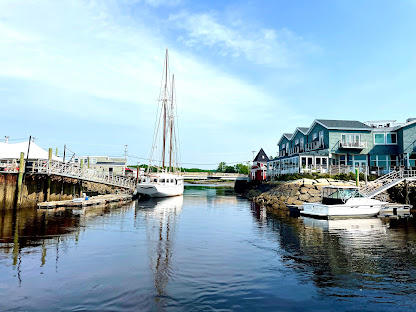 Our last day at Moody Beach, the day before Sparky's birthday...Sparky's brother Rich came up from Bedford, MA in his high performance Tesla, to take Sparky out for a birthday lunch. Lunch was wonderful at Hobb's Harborside, and Rich's family--his wife Lisa, daughter Sara and her finance Spencer came for a surprise visit as well. Here is Sparky with her middle brother, Rich. 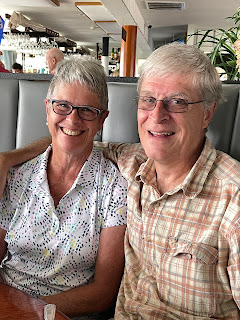 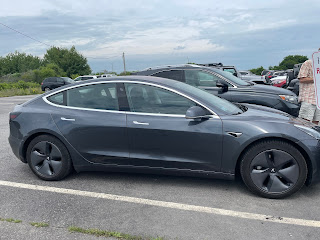 Unfortunately, we forgot to get a photo of the whole family at lunch! Then, Rich took us for a ride in his Tesla, and it was AMAZING! He had to wait THREE years for this particular model Tesla car. So many cool facts about the Tesla. Something like 18 moving parts in the electric motor as opposed to over 200 parts in a conventional car motor. It goes from 0-60 in less than 3 seconds and he demonstrated that on the highway as we entered on the highway. G-Forces--yikes! He said that the car outperforms traditional expensive performance cars consistently. No maintenance needed on the car! No replacing brakes! (Regenerative braking on an electric car.) He showed us how it gets charged and the many cool features on it. Everything is controlled by the large GPS panel. 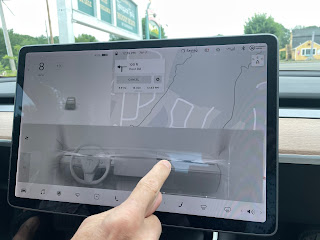 There are NO gauges, NOTHING on the dash, it's all on the panel. 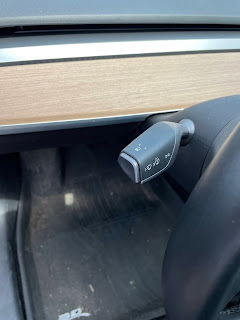 There are eight cameras on the car, giving 360 degrees of visibility up to 250 meter range. There are 12 ultrasonic sensors complement the cameras enabling detection of soft and hard objects. He demonstrated the autopilot and how safety features (you have to have one hand on the wheel at all times to let the car know you are paying attention.) If he were to make an unsafe move, the car will override him and pull it back into safe compliance. He can summon his car from a parking lot with his phone and have it drive up to him (!) as long as he has visual contact with the car. He explained how people have tried to circumvent the autopilot features and why you hear so much more about a problem with a Tesla than with conventional cars. The car industry doesn't want Musk to succeed because he's so radically different in his engineering ideas and production methods. They want him to fail, in Rich's opinion.

Here's another cool feature. When he takes a trip, the software plans all his points of interest stops and charging stations with allotted time stops along the way. He told us so many interesting things and so much about the safety features of the car, we were just truly amazed and gobsmacked. (Sparky has just been waiting and waiting to use that word!). The way the car is made from molded parts and alloys, it is far more structurally sound than a conventional car.

Elon Musk, the visionary that has made this car take off in popularity, even has a quirky sense of humor. Rich's Tesla comes with sound effects. You can assign different farting effects when a passenger gets in and sits down. You can assign goofy sound effects for your turn signals if you wanted. We laughed heartily at that! It really is a very interesting car, and has dropped down in starting price for the base models to under 40,000, approaching the average cost of a new car. Most of the features on Rich's car start with the base model as well. Well, maybe not the farting noises, haha. It is truly an amazing car and very very safe. We were very impressed!

Sparky wondered about software glitches and still does, but Rich says the software is so well designed, that if there is a problem, it's taken care of almost immediately by the company. He's extremely happy with his Tesla and boy, is he a great salesman for the company! He even has a wonderful license plate: 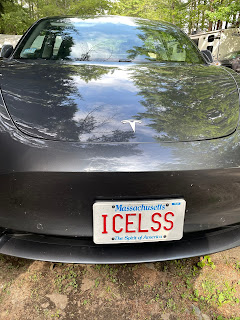 It stands for "Internal Combustion Engine Less". Haha...Good one, Rich!

And with that wonderful visit from family, we packed up that evening and got ready to move the next day...We will see you in Ellsworth, Maine at Patten Pond RV Park, 21 miles from Acadia National Park visitor's center.....Bye for now....

Posted by Jeannie and Eldy at 8:54 AM