Day 10--Sparky hikes the Mount Healy Overlook Trail, it was not far from the Denali Visitor's Center....She took a right at the train tracks instead of a left and got on the wrong trail. It was 300 steps down and on another trail and asking some hikers along the way, before she realized the trail she wanted was BACK up those stairs and the other direction, so back she went! The Mount Healy Trail travels part way up Mount Healy, a small mountain overlooking the entrance to the park. It's a steady mild uphill climb, then gets really steep near the top. It is NOT a loop trail, and is about 2.7 miles one way, with a 1700 feet elevation change, so Sparky got a good hike in today.

Day 11--The bus tour inside Denali National Park...it was FANTASTIC  as always...We have always seen grizzly bears (this time right on a hill right next to the bus!) moose, willow ptarmigan (the state bird), caribou, and mountain goats. Today was no exception, along with some new species we had not seen before--mew gulls. Along with the AMAZING scenery, we learned some new facts about the wildlife in the park.

1.Mew gulls eat mice, then fly back to their nests and regurgitate the food to their young. EWWWWW!

2. Hiking the tundra is difficult. It's moist ground and you can sink up to your waist sometimes.

3. Moose eat 15 out of every 24 hours. 80% of moose calves don't make it thru their first year. Moose are bigger than you think they are!n This we knew having seen moose up close and personal this time and times before. You do NOT want to encounter a mama moose with calves with trying to get close to get a photo. That is VERY dangerous and the moose will charge you. If you get close to ANY moose, they could charge you. 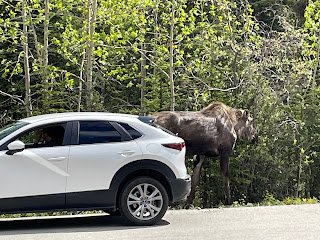 4. Grizzlies PRIMARILY eat vegetation! They eat fruits, berries and grasses mainly. They are omnivores which means they will eat meat occasionally like rodents or other animals such as downed caribou or moose.

6. Taiga means "land of little sticks" in Finnish. The evergreen trees that you see in the national park are stunted and deformed because of the big winds and very dry air. The climate is very dry in Denali which surprised us. They only get about 15" of precipitation a year or about 2-3 feet of snow! There was an area of the park the driver called the "Drunken Forest" because the permafrost shifts the base of the trees all over the place. 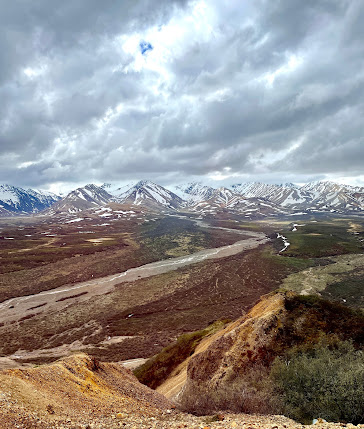 The scenery on the bus tour takes your breath away. The road the bus travels on is NARROW, one and a half lanes, it's scary if you look out the window on one side, so Sparky tries not to look. She always has visions of the road crumbling out from beneath the bus.... 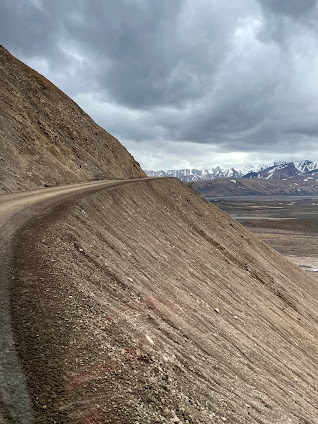 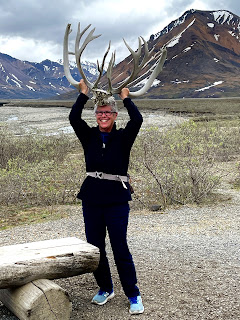 and see how heavy these things weigh! 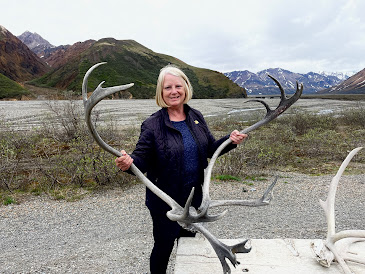 We had a wonderful bus tour, the drivers are all so very knowedgeable whether you go on the Green Transit Bus Tours, (not as complete and  full narration or guided tour information as the park tours) or the park sponsored tours. Jeannie was absolutely thrilled that she got to see this amazing place. We got back early in the afternoon, took a little nap, and decided to start heading back to Anchorage, cutting off some of the distance so we would have a little more time to sightsee on the way back and make one last stop in Seward before heading to the airport. We boondocked that night in a forested area/pullout about 98 miles from Anchorage. It was a mosquito laden area, the first really really bad experience of having mosquitoes ruin our stay. It was just one night but they swarmed in clouds, we kid you not--the quick in and outs of getting in and out of the rig let in a BUNCH of mosquitoes. They buzzed all around in and out of the coach all night and we slept poorly. We were killing mosquitoes from that one night stay for the next two days! We had not had a problem with mosquitoes the entire time we were in Alaska until that night.

Day 12--We drive to Seward on the Seward Highway by way of the Turnigan Arm, a spectacular scenic drive. 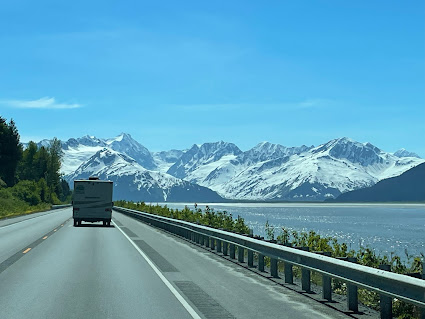 We stopped for lots of photo ops....Trying to capture the beauty of Alaska one more time before we had to leave. The weather had turned gorgeous and so we made the most of the sunny couple of days that were our last. 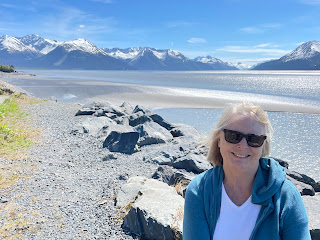 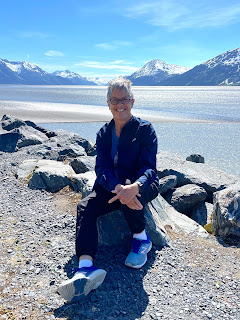 The Turnagain Arm inlet has something called the Bore Tide. It's a wave about ten feet high that forms when there have been extremes in tides and the full moon is involved. People surf the tide, and sometimes the beluga whales follow the tide into the inlet to feed on the swarms of marine life that come in with the tide. You can read about the Bore Tide here: bore tide We wish we could have seen it, but the timing of our visit wasn't right. There used to be a water spigot on the Turnigan Arm drive where you could stop and fill a water jug with pristine glacier water, but we were not able to find it on the drive today. We think it's gone....On we drove to Seward.... 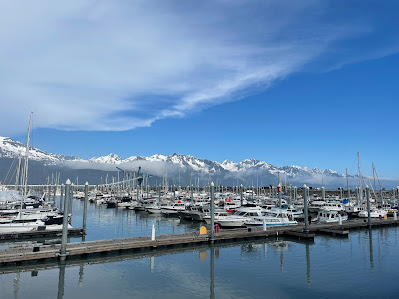 We arrived and got our spot at the Seward city campground called Resurrection Campground. It's right on the banks of Resurrection Bay in Seward. 50-55.00 a night with hookups, but no sewer, just electric and water. It was windy and COLD...but we loved it. Remember, we came to Alaska May 25th, so the warmer weather wasn't there yet.

Seward is a beautiful harbor town, almost as beautiful as Valdez. Great murals on walls around town, along with Native American stories and murals, a great aquarium, great shops, a quilt shop (yay!) and good restaurants. Jeannie 1(Sparky) and Jeannie 2 (Sparky's friend, Jeannie G.), LOVED our meals. Eldy did, too! 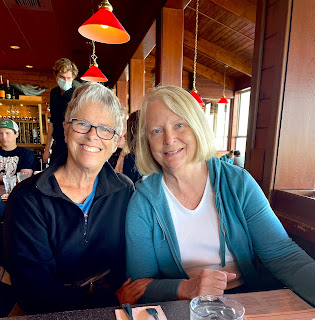 So we highly recommend  Ray's Waterfront Restaurant. The food was terrific and of course the company, fantastic! 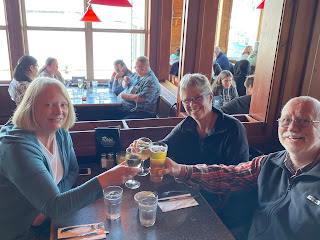 The view just outside the restaurant at the harbor is outstanding as well! 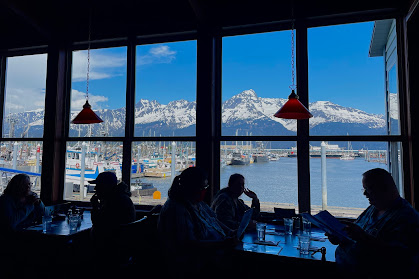 The Seward Library has the coolest, color changing exterior depending on where the sunlight is. As it moves through the sky, the colors on the library's facade change. Even on a cloudy day, it's amazing! 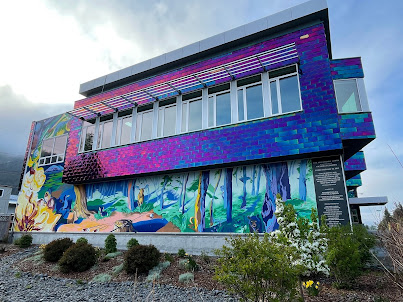 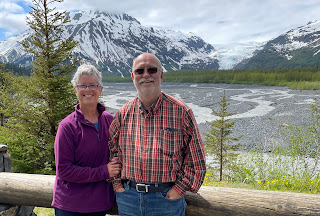 Day 13-Two days to go....and tomorrow is a travel day back to the airport....We drive to the Kenai Fords National Park right outside Seward to take the Exit Glacier hike. You can take a short hike close to the glacier, or you can take a longer hike (8.2 miles) up the mountain/glacier to the Harding Ice Fields, which Sparky decided to do. Eldo always worries when Sparky hikes alone, but hey--there are USUALLY other hikers on the trail, and Sparky USUALLY has bear spray. Eldy has bad knees and Jeannie G. is not used to hiking rugged trails, so Sparky went up on her own today.

Eldo and Jeannie were waiting on Sparky, so we all agreed to a three hour window. An hour and a half up, same coming back down, and if Sparky wasn't back by that time, Eldo would be calling for the ranger. Deal! She had a blast hiking! Here is a makeshift section of the trail that was helpful once snow was encountered. 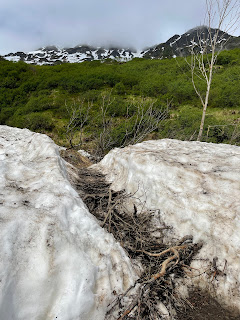 Sparky never made it to the top of the ice fields, but it was a strenuous climb, great exercise and the views were fantastic! Some day, Sparky hopes to go to the very end, a hike of 8.2 miles. She thinks that is one way. Whew! 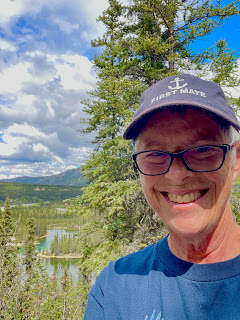 A spectacular view awaits the hiker who makes it to the end, a horizon of ice and snow. (photo from the internet)

Time to turn around and come back down.....Here is one more shot of Exit Glacier. If you look closely, you can see the tiny people who are out in the mud flats of the glacier deposits. They are just tiny little dots at the bottom between the water and the rocks to the left....The enormity of the glaciers is indescribable. You just have to see them to appreciate them. The glaciers are shrinking, most of them, and we have been so lucky to have gotten to see them in our lifetime. 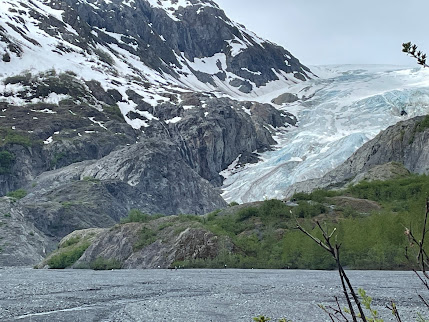 And that, folks, was the last day of activities in Alaska for us. It was with great sadness, that we returned to Seward, and gathered our belongings and began to pack. Sparky just had to sleep in the upper cab bunk the last night before returning the rig. She can still climb the bunk ladder, so why not? 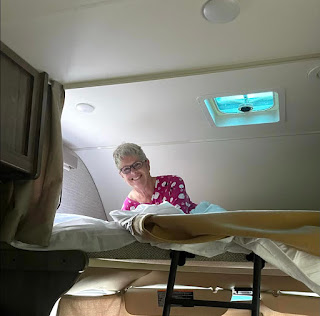 Day 14--traveling to the airport...We stopped along the way at Potter Marsh, in hopes of seeing one more chance of wildlife. Sparky and Eldo have seen a moose there before. It's a beautiful marsh with beautiful boardwalks, a nice, final stopping point before going back to the airport. We turned in our rental RV's back to Great Alaska Holiday and got checked back in. All was good! 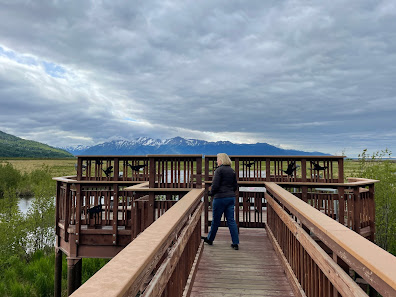 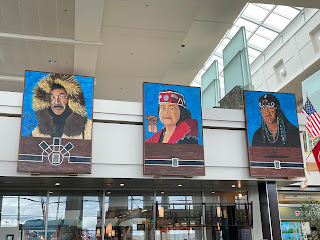 The Anchorage Ted Stevens International Airport is a beautiful small airport. It has Native American artwork, great restaurants, beautiful sculptures, taxidermied bears and is a very pleasant place to spend a lot of hours while you wait for your flight back to your home destination. Sparky's favorite artwork is the glass slivers panel of salmon swimming upstream and the mosaic tiled ceilings near the moose exhibit. There is often a LONG waiting time leaving Alaska for flights back home, it's just the way the airlines schedule their flights out of Anchorage. But we love the Ted Stevens airport!

It was SO difficult picking out the best photos, the best scenery, and trying to explain why Alaska calls out to our hearts to keep going back. We are not sure if we can go again, we sort of figured this was our last time because of our age and expenses (which really were very reasonable), but never say never, says Sparky! There is something magnificent about the scenery and the culture....no matter if it is raining or snowing, or it's a dreary day, the magnitude of the beauty of this wild frontier has a strong pull for us. It was even more enjoyable sharing this Alaskan adventure with Jeannie Garrett-Kelly, Spark's friend of over 40 years. She was so flexible and so appreciative of everything we saw and did, and she was in awe of this beautiful state. It was wonderful seeing Alaska again through her eyes....

We hope you enjoyed our visit to Alaska and that maybe we have inspired you to take a trip there, rent an RV, and go have the experience of a lifetime. Thanks for reading and following along with us.....

Posted by Jeannie and Eldy at 2:00 PM