Eating Our Way Across Southern Maine...and Other Pleasurable but Dangerous Activities

Bet THAT title got a few people's attention....First, the pleasurable. 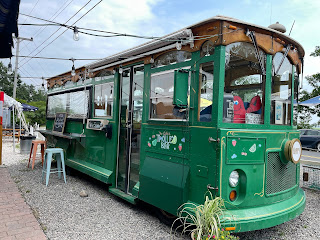 Oh, my goodness! So many great restaurants here! Our latest discovery was Fisherman's Catch in Wells Harbor. Eldo said that's where the locals go, but hey, the secret is out. We suspect that's where the tourists go, too, because it was BUSY!  And quirky. And cute. And delicious. There's a trolley bar right outside in front of the restaurant if you just want to get something to drink. The restaurant  has dine-in seating that overlooks the Rachel Carson Wildlife Refuge. Wow.... 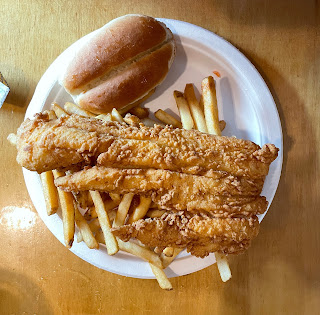 Eldy had fried haddock and chips, Sparky had great clam chowdah and shrimp tacos. Warning...they don't grill anything, it's all deep fat fried, so Sparky's tacos were filled with deep fat fried small shrimp. Which were delicious. Which she ate anyway.....sigh....

We've eaten breakfast at the Omelette Factory twice, it's that good. They don't dump over half of your plate with home fries like most places do. The portions are very appropriate and the food is just wonderfully good. Better than average breakfast fare, we think.

Ok, the dangerous part. If you want to ride your bike anywhere in Wells, Ogunquit, Kennebunk, Kennebunkport, etc, you have to ride on the highway, in this case, Highway 1, a two lane roadway thru the New England towns. You are riding on the shoulder, actually designated as a bike lane. And sometimes the shoulder/bike lane joins the main car line. (Sparky sounds like she is in her grandson's after school pickup line!) And sometimes the bike lane is on both sides of the road, and then it disappears in town to one side of the road before starting up again. Yikes! If you are a young whiz kid like Sparky's brother, Rich, who is 68 years old and thinks nothing of riding 50-85 miles or more several times a week in Bedford, MA area, that wouldn't faze you a bit. BUT- If you are 71 with a mild balance problem like Sparky, riding on the highway (even though Highway 1 is about 35 mph on good days during certain times and about 10 mph most of the rest of the time), so close to cars and big trucks going by you, THAT is a big deal and a little scary. (But that doesn't stop Sparky yet!) Nope...just had to find the Marginal Way today and so Sparky went by bike. Down the highway. Marginal Way (named for how close the trail is to the seaside cliffs) starts in Ogunquit, off Shore Rd. right next to the Sparhawk Inn.

The bike ride down to Perkins Cove is pleasant but a little nerve wracking even after leaving Highway 1 to go on Shore Road. You are still sharing the road with cars. Along the way is the beautiful Ogunquit Memorial Library. 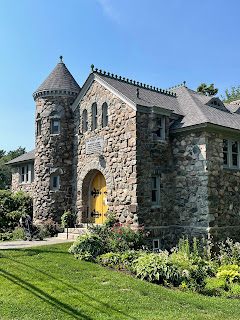 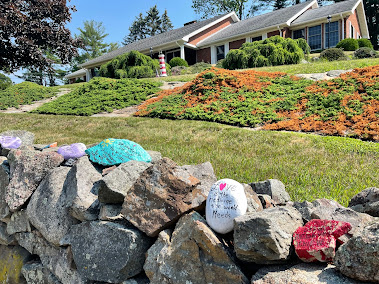 You also pass this delightful stone wall with many many painted rocks decorating the ledge. Sparky had to stop and read just about all of them. Very inspirational! Thank you to the home owner and their family for doing this. 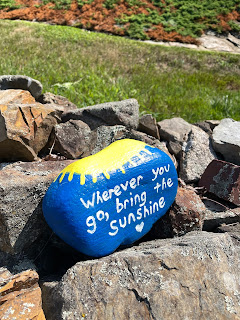 It's about a 1.4 mile paved trail one way, and a beautiful way to see the ocean, the waves, and the interesting rocky beaches along the way. It is a little hilly in spots, and VERY heavily trafficked in the summer. No bicycles, scooters, skateboards or dogs allowed, because the trail is narrow.

People say you can park your bike in Ogunquit, and then walk the trail but it wasn't easy finding a bike rack anywhere near the trail that wasn't on private property. There is a public parking lot across the street from the Sparhawk Inn next to a fire station but no bike racks, so Sparky decided to ride to Perkins Cove, lock her bike at a rack there, then walk the trail from that end to the other and back. 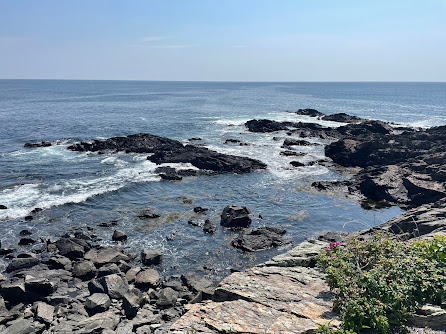 It's a beautiful trail with LOTS of amazing scenery. 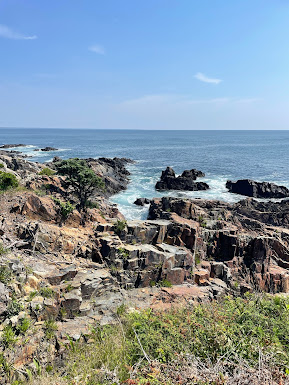 You pass the stately homes on one side of the trail, and the Atlantic Ocean is on the other side. A couple of the beaches in Ogunquit are quite small and very rocky. Sparky saw one with a lone lifeguard outpost on a rock outcropping. In the photo below, the lifeguard stand is on the upper right on the rock formation jutting out. She's on duty from 10:00 AM to 5:00 PM. The lack of sand did not deter these visitors! 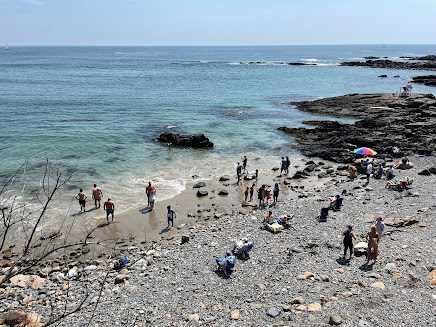 These beaches near Perkins Cove have stairs going down to the rocky beach. A few places where people were swimming in the cove inlets where there were NO LIFEGUARDS had this sign posted. That didn't deter them at all. Why wouldn't you choose the stairs after reading this sign, Sparky does not know. But of course, travelers know that wherever you go and there are a bunch of rocks and boulders, people will climb where they shouldn't. Click on the photo to read the dire warning! 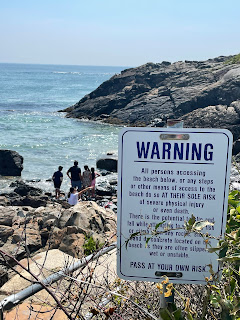 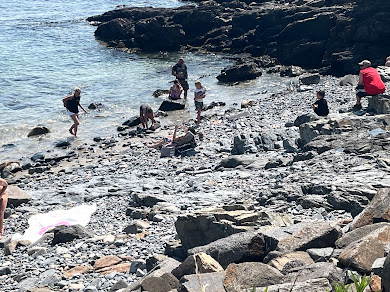 It was a very hot day, surprisingly, not much air moving at the beach.

People were sweating as they did this walk. There is SOME shade at the beginning in Perkins Cove, but it's out in the sun just about all the way. There are 39 benches along the way so plenty of places to stop and watch the ocean or the people going by on the trail.

After Sparky got back to Perkins Cove, she promptly downed two delicious genuine lemonades (not the fake kind) at Barnacle Billy's, a cute restaurant at the cove. It was a really hot day, in the 80's so the lemonade sounded really great. Expensive, (4.60) but free refills. Sparky could have had 3, but thought better of it and headed back home on her bike for that harrowing ride back on the highway again. When Sparky got back to the park, there was a mom and her little daughter waiting for the trolley to take them to one of the Wells beaches. She didn't care which one! They were so cute sitting out by the park sign in their beach chairs, Sparky just had to get their photo. She wished she had gotten their names. 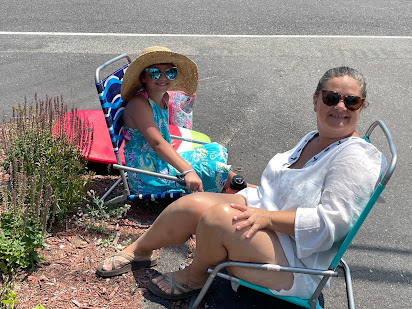 Note to self: There is a parking lot down at Perkins Cove and more shops and some additional restaurants. There are also lobster boat tours there and a cocktail cruise option. Parking is 4.00 an hour at the cove lot, so you could park there and do the Marginal Way trail and not have to negotiate car traffic on a bike. The earlier you go in the morning, the better to be able to find parking. The lot fills up by about 10:00 AM, the attendant said. The trail itself was wonderful and Sparky plans to go again with Eldy but not by bike. (Whew! says a relieved Eldo.) Highly recommend the trail, not to be missed! Bye for now.....