Sparky Remembers How to Kayak!

It's really been a LO-O-O-N-G time since Sparky has been kayaking. She used to have a really beautiful 14 foot kayak when she lived in Indiana and kayaked on local rivers, but that one has been long gone. While living in Florida, she went out a few times in rentals. There was a great river in the neck of the woods where she lived and a little outfitter fishing camp called Jigg's Landing on the Braden River, so that was a great way to see nature and paddle for hours. Sparky almost always saw alligators, and even ran over one one time! We've been on the road now for a year, (can you believe it?) and opportunities to kayak just haven't been on the priority list or all that available till now due to Covid restrictions and proximity to water. But when it's right in your backyard/campground, time to dust off the paddles and go!

There's a HUGE pond located at the Patten Pond Thousand Trails campground, 849 acres. It's more like a lake. The campground has kayaks and paddleboats. The kayaks are shorties--about 10 footers, and are sit-ins, or sit upons. Kayak rentals are CHEAP! Ten dollars for the first hour and 5.00 an hour for each hour after that. Sparky is IN! Bug spray? Check. Ditty bag with goodies? Check. (So THAT'S where the candy supply went, says Eldo.) Heh, heh, heh. Water? Check. Sunscreen? Yep. She's ready, all right! 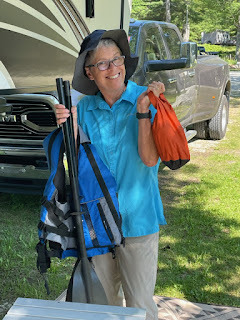 And off she went. She hadn't been in the water long at all, about ten minutes and loons were calling each other all over the place. Almost sounded like they were fussing at each other. Sparky paddled like heck towards the sound, but wouldn't you know, by the time she made it to the area where she heard them, there was not a single loon to be found. 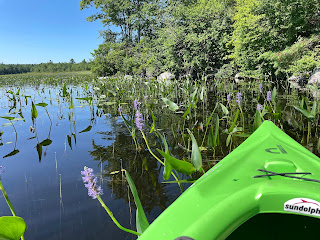 That's ok, it was a beautiful paddling day....Temperatures in the low seventies, sunny, and a nice breeze. This part of Maine is ROCKY, no surprise there. There are lots of boulders in and around the campground, so the pond is LOADED with boulders all around the border of the pond/lake. They are like icebergs--you can see the tops, but the bottoms are BIG under the water and if you get too close, you could go aground on one of them. (Ask Sparky how she knows, laughs Eldo.) 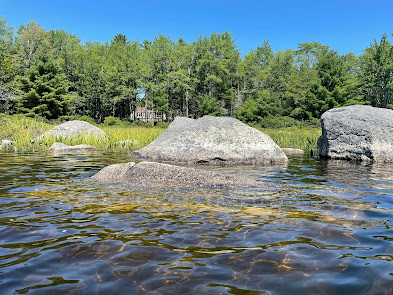 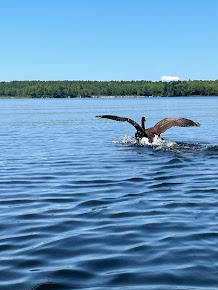 Sparky saw a gaggle of geese instead of the loons. The gander (she thinks) made a big beeline toward the kayak and squawked and fussed about her being near the group. So Sparky gave them some room, and off they went.

Sparky loves seeing the underwater life as well as life on the surface. The way the aquatic plants send curling tendrils up towards the sunlight to bring the pads to the surface, some with different colors, is so pretty. Surprisingly, no fish were seen nor turtles. They must have been hiding. 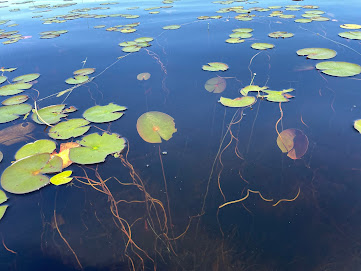 Sparky enjoys trying to take photos of the water lilies from lots of different angles, but this one was one of her favorites. 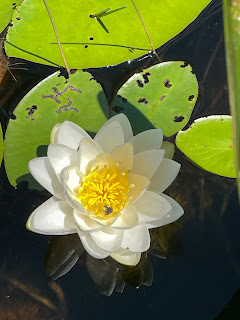 Or how about this one? It's pretty spectacular! Sometimes you just get lucky and get the right angle, the right amount of light, the right subject, the right time of day and tada! 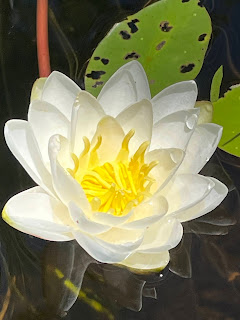 It's interesting to see how Mother Nature colors her world. Look at the horizontal striping of these marsh plants..They were VERY red on the bottom, then yellow, then green, and quite evenly striped. 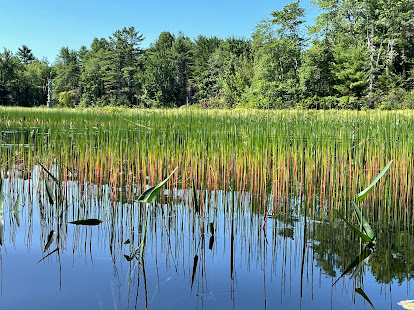 After a couple of hours, time for a paddling break and those peanut M&M's, Sparky's go-to for an energy pickup! 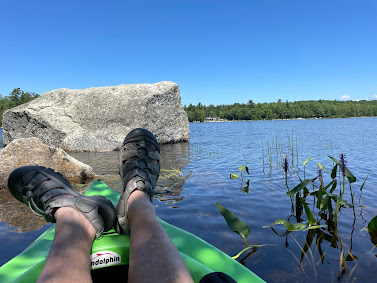 What a life, eh? Sparky needs to do this more often. The legs get tired from walking and bicycling, that's for sure. But tomorrow, Sparky heads to the carriage roads and the crowds of Acadia National Park to try and get some cycling in. See you on the roads of Acadia next time!
Posted by Jeannie and Eldy at 7:02 PM