Oh, wow...where do we start? We were checking out the top ten things to do in Nashville on Trip Advisor, and up came the Fontanel Mansion, former home of Barbara Mandrell, country music star, and her family for 14 years. Barbara Mandrell started touring at the age of 13 with Patsy Cline, George Jones and Johnny Cash. She played many instruments, but blew people away with her skills on the steel guitar.

When the descriptions of Fontanel said "the largest log cabin in the world", Sparky said, "C'mon, Eldy, we gotta go see this!" So we did! 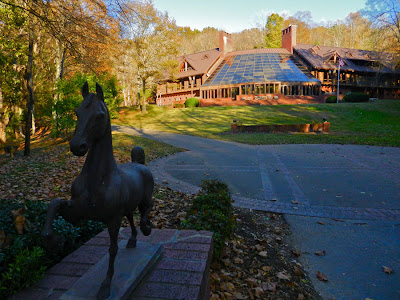 The cost was 16.30 for seniors with a 15% AAA discount....We had a WONDERFUL tour guide today, actually, a couple of people made our day very special...Marc Brown, our guide that brought us to the mansion, was one of them. He gave an introduction as we were riding up the drive, and revealed that he was a banjo player for a band called the Cow Dudes...He's traveled all over the country being a tour guide at the national parks and all kinds of places and then played banjo at night. He played for Roy Rogers and Dale Evans. Remember them, you boomers? He turned the house tour over to a capable gal by the name of Cheryl Jackson. She was a Minnie  Pearl impersonator/tribute gal in Nashville and a stand up comedienne as well as being our tour guide at the house!

Fontanel Mansion is the name of Barbara Mandrell's home, country music star Hall of Famer..How did Barbara name her home? According to our tour guide, doctors said she would never have a baby after she suffered traumatic injuries in a car accident. She did, she had a son. Fontanel is the name of the soft spot on a baby's head, and after she had her son, Barbara said this home would always be a soft spot for her family...
This was one of the best tours we have ever done. You can touch things, open drawers and closets and look inside, and you can look through personal memorabilia from the Mandrell's and the current owners, who manage today's hot music stars. We looked through Barbara's personal address book, picked up guitars owned by country music stars, and sat on the furniture. You can even lay on Barbara's bed. Sparky did! 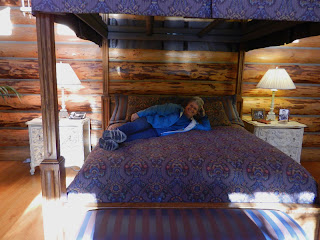 Eldy tried on Kenny Chesney's jacket that he left behind after a party at the house. 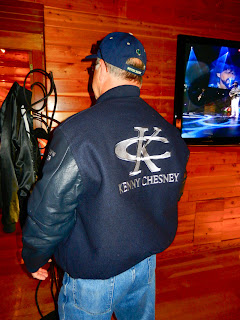 Barbara's home was 27,000 square feet of timber, high class elegance, amazing features and lovely views of the surrounding forests. Check out one of the views from one of the nine porches! 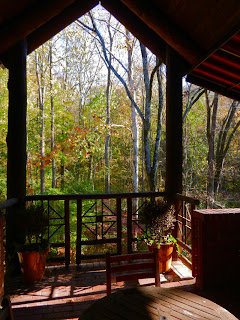 And here's a view of the pool, which has been covered with plexiglass for insurance purposes since they started doing tours a year and a half ago. They still keep the pool filled with water and use it as a dance floor when they rent out the house for weddings and corporate shindigs....We walked on water today! It was a little unnerving..... 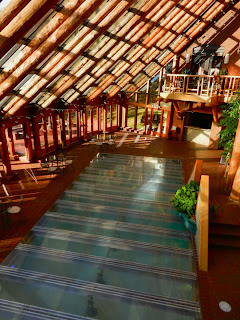 Barbara's bathroom? The tub tailor made for her petite frame....Marble walls everywhere.... 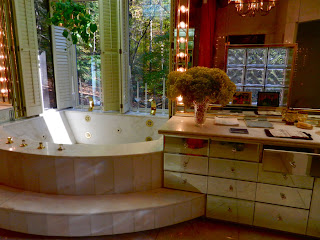 Barbara's family had a shooting range in the house...They were good shots..Guests Kid Rock and Hank  Williams, Jr., took an AK-47 when they were partying hearty, and shot up the walls of the shooting range! With all the holes we saw in the side walls, they weren't very good shots!

We explored the entire house....Lots of personal family stories are shared on the tour as we went from room to room. Some of the big log pole posts have signatures of the famous guests who have visited the Mandrells. Barbara had people sign the log poles in the living room when they visited. ..Oprah Winfrey, the Statler brothers, Bob Hope, and the signatures of many many more...Speaking of logs, Barbara's husband, Ken Dudney, had 42 logging trucks bring in logs from Montana to build the home.
You can also tour Barbara's tour bus rig for an additional five dollars. We did. It's an Eagle coach made back in 1993. It was very interesting to tour a high end coach from that time period. At that time it was a half a million dollar coach. Barbara had faux ostrich leather covered walls from ceiling to floor! Tons of storage, it was surprising to see that. Some of her show gowns are still hanging in the closet. For a 30 year old RV with over 3 million miles on it, it was in excellent condition. Everything was black and white... 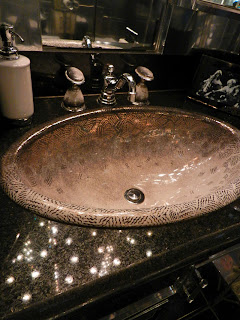 A thoroughly enjoyable tour...A glimpse into another world of the rich and famous.....We highly recommend it! 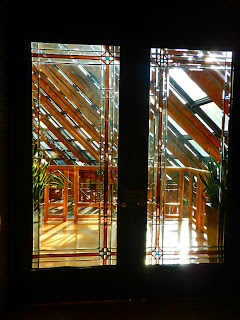