Nuttin' Much to Write About Today!

Well, this is getting close to a first...Sparky is just about SPEECHLESS..(WHOA! Say it ain't so, Sparky!)  And for no particular reason except we didn't do much of anything today...So the blog is going to be super short for the next couple of days until something excitin' happens, which ain't likely for the next couple of days...(Sparky, why are you talking like that? wonders Eldo.) Because she just got done reading Billy Bob, a blog that Sparky reads to Eldy every day in her very best red neck, hillbilly accent using the same one that Billy Bob uses to write in his blog. Eldy gets a kick out of hearin' Sparky talk like an ole Southern gal so Sparky hams it up with the accent and all, and Eldy gets a good laugh for the day. And then Sparky has to ease back out of the good ole Southern boy accent that Billy Bob uses, and get back to normal.

Sparky rode the trails today looking for L-O-O-N-G pine needles, above and below ground....No snakes, whew! 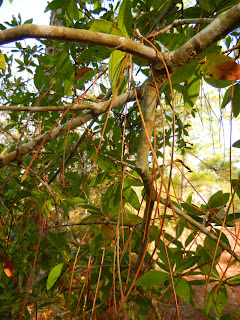 Eldy washed the coach a bit and polished the wheels and found out that the front wheel hubs have an oil reservoir that needs to be checked every so often. He had seen a little oil on the ground and was worried we might be leaking oil from the engine, but it wasn't in the right spot. After checking manuals and talking to Freightliner, Eldy found out where the reservoir is in the hub and will keep an eye on it from now on, something new we learned today! Current levels appear to be where they should be...Here's a diagram of the wheel hub reservoir/cavity behind the hub cap. So those of you with Freightliner chassis, another place to check for oil levels, in case you didn't know. 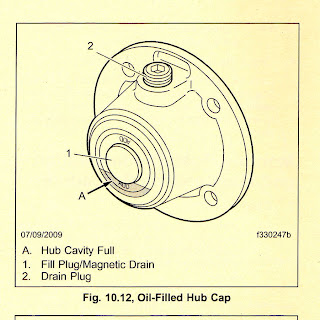 Sparky cleaned the inside of the rig with the central vacuum system. Amazing to Sparky that an RV has a central vac--nice touch, Tiffin! and that it actually does a decent job. It's a Red Devil brand vacuum.  Sparky keeps forgetting the check the bag contents. It empties into a bag/canister/box outside in one of the bays.

Sparky worked on her pine needle basket.....It's coming along.... 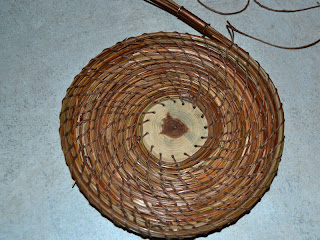 Eldy researched a good place to eat for supper....DeSoto's Seafood Kitchen in Gulf Shores...They have senior specials which helps the budget, so we had a nice dinner there this evening....Nothing spectacular, just good average food with reasonable prices for a restaurant near the beach. Grilled shrimp on rice, baked potato, cole slaw...It was delicious! Eldy was hoping for some raw oysters, but they said they had been "bad" lately, so they didn't have any! Phooey! So he had fried fish, french fries and coleslaw. Here's Sparky's grilled shrimp, cole slaw and baked potato. 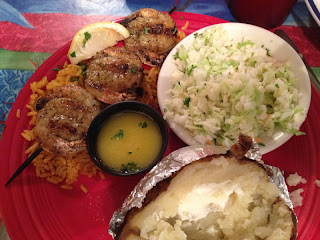 Came home, thought about what to write for a long time, couldn't think of much of anything, but still felt the need to report in, haven't missed a blog yet in 2 1/2 years!...Time to watch NCIS , the NCIS LA, then "Vegas", our faves on the Tuesday night lineup. Gotta love that NCIS. After an episode about post traumatic stress disorder, "Agent Gibbs" (Mark Harmon)  and "Abby" (Pauley Perrette) promoted a help number for vets suffering from PTSD and needing help. Awesome!    See ya later......