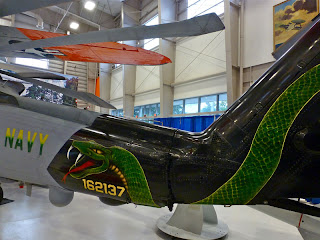 Off to see what's new at the Pensacola Naval Aviation Museum....Two years ago, we were there and thought it was one of the most fantastic aviation museums in the country that we had ever seen. We still think that. It's FREE, and not to be missed. So many cool planes, BIG, HUMONGOUS planes, with their engines displayed right next to them. Aircraft hanging everywhere! Wonderful exhibits to learn and videos to watch. Sparky especially enjoyed sitting in one little theater section and learning about how some of the ace pilots in Viet Nam outwitted the fighter jets chasing them. 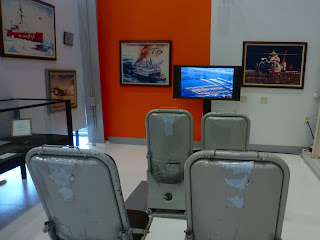 There are some new things in the museum since our visit in 2010 that we were looking forward to seeing.
One was the Hangar One addition to the museum...You have to take a brief walk from the main building to Hanger One...Lots of cool stuff to see in the new addition.....The Presidential helicopter from the Nixon and Ford era... 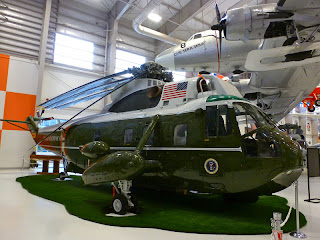 There's an aviation building called the "Ambition" on the grounds. It's part of the Navy Aviation Academy. It has 102,000 square feet of space devoted to a hands on approach for middle to high school students to teach science, technology, math and engineering. It's an immersive, role playing, serious game environment to help foster a superior learning environment in the sciences. Each "deck" or story replicates each deck on a modern aircraft carrier. We don't know if tours are offered, but it would be really cool to see the inside of this structure! 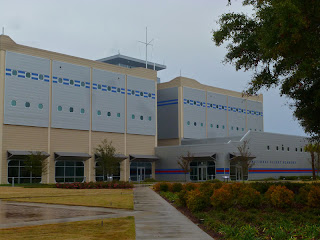 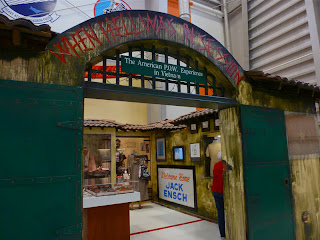 We saw the very moving exhibit of the Viet Nam prisoner of war camp...Sparky had really very little knowledge of the intimate details of the suffering and torture that happened to our servicemen...It was very sad and upsetting to view the exhibit, but she felt it was important to learn about it. So she and Eldy spent quite a bit of time in this part of the museum at this particular exhibit....There were very graphic drawings that a serviceman P.O.W. drew to reveal the terrible tortures that many American prisoners suffered at the hands of the enemy. The treatment of our servicemen was atrocious.

There were lots of interesting things to learn about how the POW's coped.... 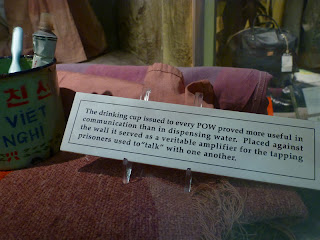 Remember the P.O.W. bracelets? These were started as part of a young student campaign back in 1970. 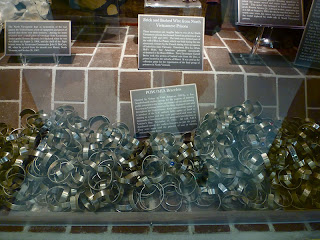 After seeing all the fabulous aircraft in both sections of the museum... 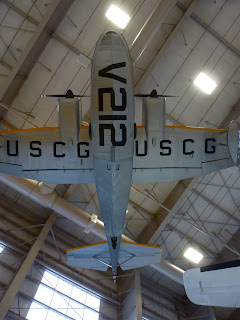 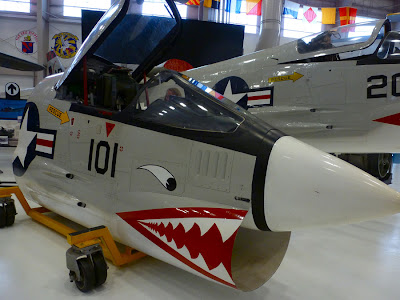 And reading lots of stories behind the servicemen, their tours of duty, the planes' years of service, the amazing qualities of each aircraft and performance stats, seeing the navy's dedication to their flying machines, we decided to take a FREE trolley tour of the "boneyard", where more aircraft are displayed.
And we were glad we did! An old codger, by the name of Dave, we're thinkin' he was about 71, gave us a 45 minute tour of the aviation parking lot behind the museum that holds yet more aviation history and relics of the past, with all kinds of planes in all kinds of conditions, waiting to be restored. 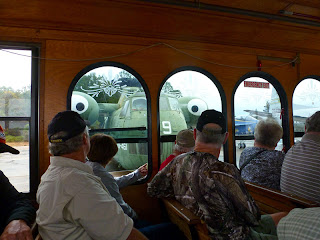 Dave was a HOOT! He was hilarious! Hard to understand, he talked so fast and slurred his words together, but after awhile, we figured out pretty much what he was telling us. 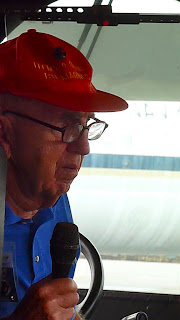 Dave saw Sparky trying to take some photos. So he proceeded to remind us about picture taking rules the museum has...(Uh-oh..Here's where Sparky gets into trouble, explains E.) Not exactly..The rules were:

1) You can take pictures anywhere you want, but don't take them off the walls.
2.) You are not allowed to take any Stealth bomber photos. Dave made a big deal of telling us there was a new prototype of Stealth bomber out in the field right beyond the trolley bus and under no circumstances were we to take a photo. ;-)  Of course, there wasn't any Stealth bomber but he had a few people going for a minute. A couple of people actually did the swivel neck thing to see where the bomber was. And no, Sparky was not one of them! (Yes, she was, don't let her fool you for a minute. Sparky is VERY gullible, offers Eldo.) Geesh! Didja have to tell them that? (Sure! Sparky has told LOTS of stuff about me, turnabout is fair play, dontcha think?)   Sigh......

He had another story about the PT-2 aircraft on an endurance flight from Perth, Australia to Washington, D.C. with a baby kangaroo on board. The kangaroo was a gift from the Australians for the D.C. zoo. The flight took 55 hours, and needless to say, the kangaroo wasn't potty trained. Dave made a crack about how "gamey" the flight must have been! Thanks, Dave, for a terrific tour! We will definitely go again on the trolley tour is Dave is running it.

The museum is an awesome place to spend hours to learn, watch, eat, shop, and appreciate our navy's aviation history...We love it and will go back each time we are here in the area.
Posted by Jeannie and Eldy at 11:48 PM