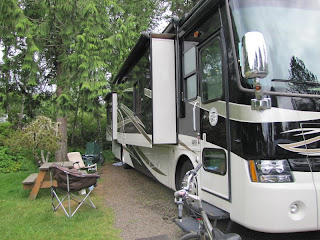 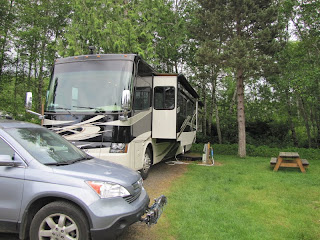 We're at the Thousand Trails membership Seaside park here at Seaside, Oregon, for two weeks at the very low cost of three dollars a day. This great rate is figured in the cost of the 199.00 zone membership for the northwest coast that we purchased back in December at the RV show in Fort Meyers. It was a heckuva deal at the time. Normally, Thousand Trails memberships for zones (northwest, southwest, etc.) in the U.S. run $499.00 at the time of purchase. You get 30 days of "free" camping, then 3.00 a day thereafter, a max of 14 days in the park system, then one week out before you can go back into a membership park. For Thousand Trails, you have to make reservations in advance, you can't just drive into a park. So we're doing a little more advance planning than we are accustomed to lately. (Eldo likes to "wing it"!) Me, the nervous Nellie ("What if we get there and we can't get in? But it's going to be Father's Day weekend!") likes the organization of knowing that we've got a place and we don't have to scramble to find something as we are going further down the road than we intended, and one or both of us are getting stressed and crabby. (ME? Crabby? Never! says Eldo.) Says E..... ;-)

We really like this park. The sites are spacious and we picked 30 amp service with cable, sewer and water over 50 amp service, sewer and water with NO cable. They have pickleball courts, although they were just resurfaced and the lines need to be painted on them. The manager said they are supposed to paint the lines Friday. Woo-hoo! Maybe we'll get to play! But the manager also told us the contractor has taken three years to get the pickleball courts done. THREE YEARS!!?? That's ridiculous!  (Don't hold your breath, Sparky, says E.) Oh, well, I can definitely ride my bike for about three or four miles around the perimeter of the park on residential streets so I'm happy about that. And you can, too, Eldy!  (R-I-I-I-G-H-T!)

This is a great location for branching off for day trips...Cannon Beach is 8 miles away to the south of us. There are state parks, Lewis and Clark historical sites, and the town of Astoria to explore. Astoria is the oldest American settlement west of the Rockies and has some great things to see there.  I love cool bridges and Astoria has the longest truss span in America at the Astoria-Megler Bridge. It also has a mural decorated cement observation tower  that Sparky just HAS to see.

Seaside is where Lewis and Clark's expedition ended at the Pacific Ocean. 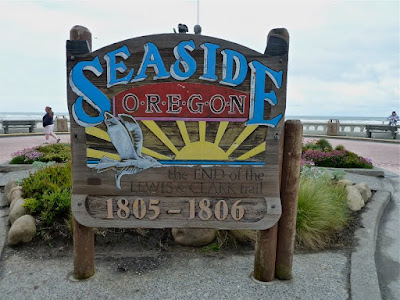 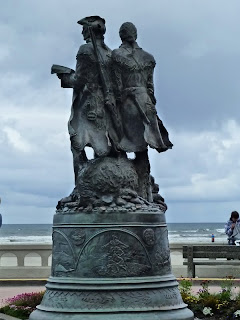 In the town of Seaside, there is a little aquarium where seals do all kinds of antics and routines to get you to feed them. There is a family fun park in the middle of town with a big carousel and lots of fun stuff for the kids or grandkids. There are the usual cute shops, boutiques and neat little restaurants. Seaside is where Lewis and Clark ended their journey as I mentioned and a statue marks the spot at the ocean's edge in town. We drove to the trail end just to see the "Turnaround" where people come in with their cars, check out the statue as they drive around and go back out, so we did just that. 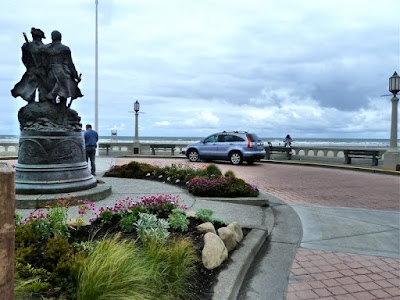 This would have been a cool place to cruise in the day...but it looks pretty new....There's a "Muscle and Chrome" show this week in honor of all the gear heads and dads who like old cars. We checked that out today and here are some of the cool cars we saw...several were ones Eldy either had in his youth or WISHED he had! 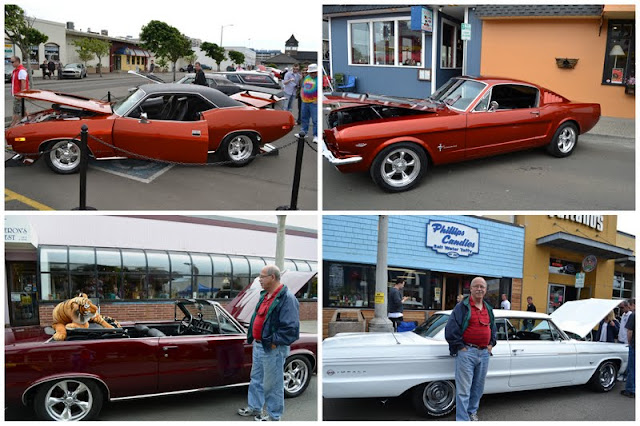 And of course, Cannon Beach is also a well known destination for its great shops, boutiques, eating spots, and its famous trademark, Haystack Rock. We saw it from afar today, but we'll plan on getting closer and checking out the tide pools soon.  Beautiful weather today...The rainy days are becoming less and less and the sunshine is starting to kick in. Temperatures are in the sixties and creeping upwards a bit. Great weather!