It's been about six months since we've been able to have a campfire...for many reasons...while we were in Arizona, we couldn't have one at the park we were at, we couldn't have one in Texas as the winds were too strong, sometimes the sites were too close, and other places we were at were motorcoach resorts and they usually don't let you have fires. With many parts of the country being so dry and fire danger high, we didn't mind the parks telling us we couldn't have a fire. Some of parks we stayed in said yes, but it had to be propane fueled. A propane fueled campfire? Yuck! I'm a purist...it's gotta be genuine firewood to be a campfire so we waited and we waited.

Here at Seaside, you can have a fire as long as it's off the ground. We have a portable  fire pit with a dome screen top and have been waiting for the right time to use it, so out it came! It's pretty nifty..(boy, am I showing my age with THAT expression!) It has foldable legs on it and a carrying case, so it's pretty compact. We bought it several months ago because SPARKY had to have a fire but hasn't been able to. (They don't call me Sparky for nothing! It's not just my feisty personality, I have a thing for fires! Campfires, that is!) We've been carrying around firewood in our car for such an occasion, so it was time to get that really dry wood out and have a fire. Yay! A lot of times campfire wood is IFFY in lots of places--too green, not dry enough, bad wood, period. Eldo has wanted to get that firewood out of the car and burn it!

Well, it's also been a long time since I've built one..I usually build 'em, and Eldy tends them because I mess with them too much. Up, down, up, down, out of my chair to poke, prod and push around the logs, usually dumping the fire on itself and almost causing it to go out. Then Eldy does his thing with the fire poker and brings it back to life. But this time I used a LOT of kindling to get it started, as you can see. Can you also see the bemused expression on Eldy's face at how much kindling I used? And not a drop of lighter fluid! I use little fire starters like waxed toilet paper holders with shredded paper in them, or little dixie cups with shredded stuff in them coated with parafin wax or other commercial little firestarter blocks. I can really get a fire going, as you can see! 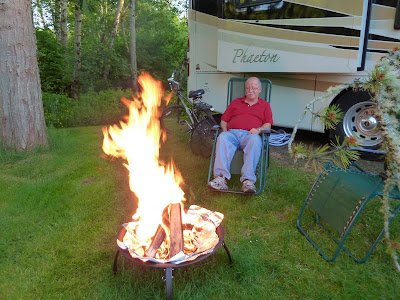 Well, of course it's going to slow down eventually...we were worried that the park "police" were going to come and tell us our fire was out of control, but nobody showed up. Whew! And here's our fire later in the evening...not too shabby, Sparky! 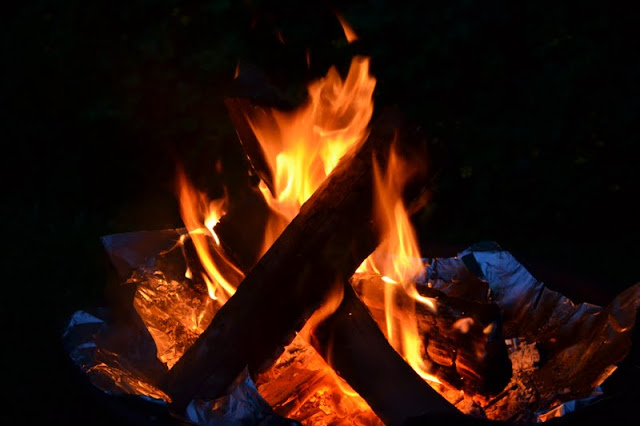 Did we have s'mores? Naw, didn't have any marshmallows, chocolate or graham crackers, darn it! We're not really big on them anyway. We can't seem to keep chocolate around long enough to get the rest of the ingredients together all at the same time. (Sparky, have you seen the Hershey bars anywhere?) Uh, nope! Sorry, honey, don't know where those Hershey bars went to!  A nice night for a fire, we hope to have a few more while we are here.

A shout-out to our newest followers, Mike and Pat McFall, (Mike and Pat's Travels), who are the Pressure Pro tire sales people and have been on the road for about 16 years, I think. I had a booth next to them when I was selling Tastefully Simple at Nick's rally this year. Nice folks and great blog! We also have connected with a young couple, Duncan and Jessica, who look like they are in their early thirties, at their blog, Traveling on the Outskirts, who are going out on the road full timing EARLY!  Good for them! It's fun to have new followers and for us to find new blogs to read, too! We're headed to Cannon Beach tomorrow for a sandcastle building contest, but we're not in it. It's supposed to rain cats and dogs, too, so should be interesting. See you at the beach!
Posted by Jeannie and Eldy at 11:45 PM

Email ThisBlogThis!Share to TwitterShare to FacebookShare to Pinterest
Labels: building a campfire