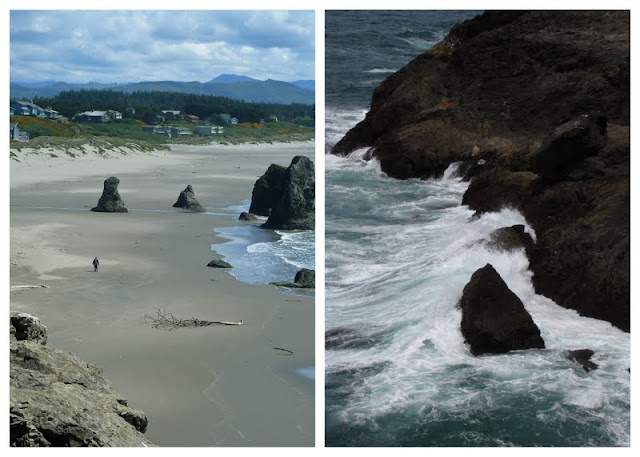 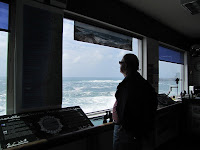 (Ooooooh, sorry about that bad pun!) But it truly does rock! So many beautiful geological formations, you could spend months on the coast photographing this unique part of our country...Yesterday we went north on highway 101, north of Newport to explore some of the vistas and state natural areas (SNA). All 363 miles of Oregon coastline has been set aside for public property, so that's why there's state park after state park after scenic area after scenic vista. We drove to the Whale Watching Center at Depoe Bay, the world's smallest harbor, and we had a great visit with a volunteer there who was VERY knowledgable about all the whales. The center is being remodeled so it's kind of a mess, but it's a great place to get out of the wind and see the bay to watch for whales. They have one whole wall of glass window for viewing. Out of the blustery, salty wind and cold! That's nice! They had spotted two whales earlier that day. We didn't see any but we were told that last week a mother and her calf were just off the shore. The baby calf breached TWELVE times in front of the observation window, like he was playing and showing off! THAT would have been a National Geographic moment for sure! Sigh! We're just not seeing the whales wherever we go in Oregon, but it's just a matter of luck now that the main migration is slowing down. You just have to be in the right place at the right time. Incredibly, at the height of migration from March through May, the whale watch volunteer told us there can be as many as 600 grey whales swimming through the bay. There are definitely three different seasons of whale watching and there is a summer one coming up. There are some resident younger grey whales that stay in the Depoe Bay area in the summer months. 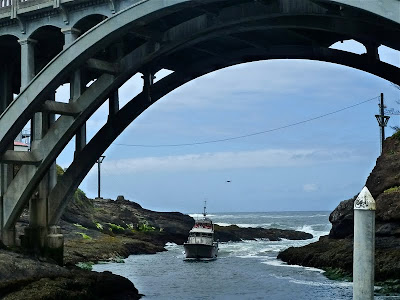 If you like whale watch tours, there is a very reasonable whale watch tour that you can take out into the bay. How's 16.00 sound for one hour? Not bad, we think we might do that! And we did! Rough seas for us that day, but not for the ship's crew...Seven foot high swells, and boy, were we a rockin' and a rollin'! You should see the narrow channel we had to negotiate coming in and out of the world's smallest harbor! It was only 30 feet wide, with a sharp turn that you can see in the photo. Yikes! The captain had to time the ship's engine surge with the surge and push of the pounding waves coming into the rocks and the harbor. Very skillfully done, captain! 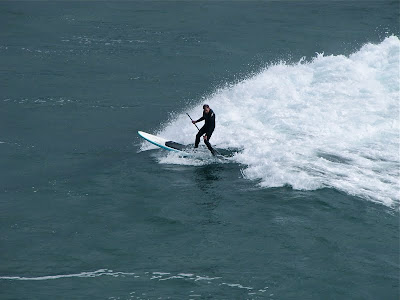 After Depoe Bay and admiring the rough surf and exploding waves along the rocks, we worked our way back to visit Devil's Punchbowl SNA, about 8 miles north of Newport, and Cape Foulweather, an outstanding vista viewpoint. At Devil's Punchbowl, there are some unique rock formations--the "Punchbowl" is a collapsed sea cave, and when the turf is really roiling and boiling, the center of the formation is something to see! Off to the side is a favorite beach and wave area for local paddleboard surfers. We saw two guys riding the waves...water temperatures are consistently in the fifties, so you wouldn't want to swim in it without a wet suit. One guy had a fullbody wetsuit on, the other guy had exposed legs and arms and he was as red as a lobster from the cold water!  It looked like a lot of fun!

The squirrels at Devil's Punchbowl were very tame and expected handouts...They scampered around right by your feet.... 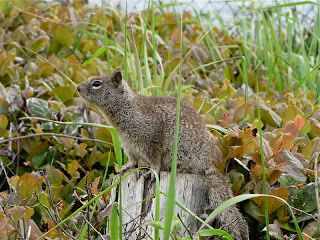 When we got to Cape Foulweather, the vista was unbelievable! The sign said winds up to 100 m.p.h. were not unusual for the cape. No wonder it has that name! 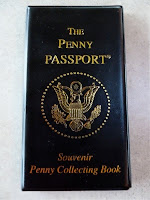 There's a cute little gift shop there, and I bought a penny passport to keep my smashed pennies in. I've started collecting pennies from different places that have those penny smashing machines. You put fifty-one cents in, pick a choice from usually about three scenes, turn the handle and the penny gets smashed with an imprint of whatever scene you have chosen. (Makes me remember my brothers putting pennies on railroad tracks when we were kids) I thought I'd make Christmas ornaments out of all the pennies I am collecting. But for now, I'm keeping them in this little book which holds 44 of them. Another fun way to remember some wonderful places we've traveled to besides buying a tee shirt and taking a million photos! Just have five so far, I never noticed those machines until just a couple of months ago so now I'm on a roll! (Groan...another bad pun!) Oh, and in the gift shop, I made a new friend! This must be a relative of Zoltar---the Old Pirate. His blue eyes kept moving from left to right as we walked by, kind of creepy! 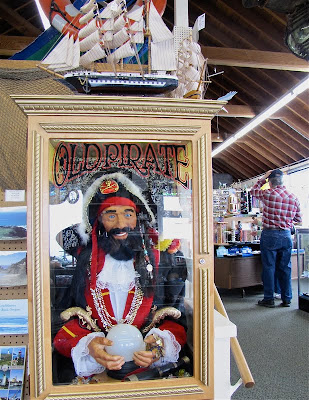 I tried to get Eldy to buy this hat, but he ended up passing it by...I think he looks like that guy, Guy Fieri, with the Dines, Dives and Drive-bys or whatever the name of that show is! 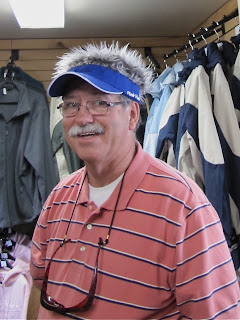