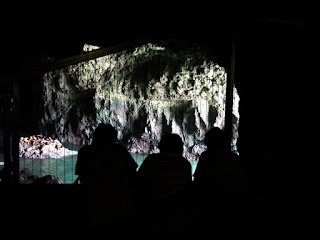 OK, we admit it, we fell over a tourist trap...haven't done one for awhile, but Sea Lion Caves was it for today, eleven miles north of Florence....Eleven dollars per person, senior rate, 60 and older. Down an elevator you go, 200 feet down and into the world's largest sea cave. There are several things going on down there...(Hm-m-m-m, and what might that be, Sparky?)  Well, you can watch informational videos about the sea lions, see informational charts about pinnipeds--creatures with front flippers--seals! There's a barred window viewing area that keeps you from getting any closer to the seals than you should. It's kind of like viewing windows at the zoo, only no glass separates you from the seals in their natural cave environment, just bars. 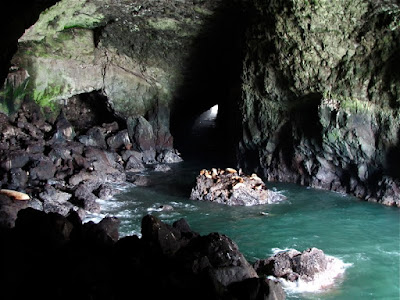 You can take photos through the bars, and you see an incredible huge cave formation with tunnels to the sea. There is a second part to the tour after seeing the seals 200 feet below the top surface and that is a walk on the other side of the tourist information/gift shop back up on top about a hundred feet back up. There you stand on an overlook and look down below at the colony of seals basking in the sun and swimming around the rock cliffs. One of the workers for the Sea Lion Caves said that orca whales had been spotted further down the coast today--this morning! and sometimes they come up to just below the cliffs where we were watching and teach their calves to hunt sea lions. Whoa! Sea lions are prey for the orcas? Some of those sea lions are TWO TONS!  We kept hoping to see a whale, ANY kind of whale as it was an extremely calm day out on the ocean, but nothing, nada....no whale activity, which was a shame, because some of those sea lions were WA-A-A-Y out from the cliffs swimming around..like..."Hey, guys! Come and get me!" 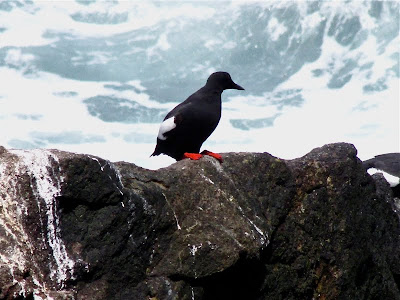 There's a nice viewing point, still down in the cave where you can see the Heceta Head lighthouse, and some great birds on the cliffs. We saw comorants (black birds with long skinny necks) and the pigeon guillemot, an interesting looking bird with bright reddish orange webbed feet. Normally, it spends most of its life out in the ocean far from shore, but they come in to nest and raise their young. We saw quite a few of those today. Such an interesting looking bird, with those bright feet! 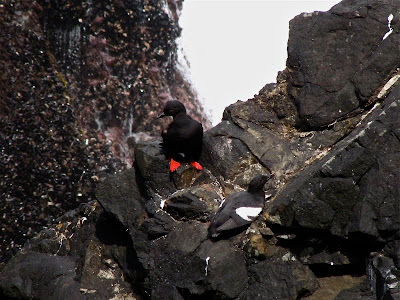 After seeing the sea lions, we headed back home....We've got one more day and we are going to do a hike---Yippee! Sweetwater Falls...a few miles inland and LOTS of waterfalls. Can't wait!  Until tomorrow.....Sparky and Eldy
Posted by Jeannie and Eldy at 11:45 PM