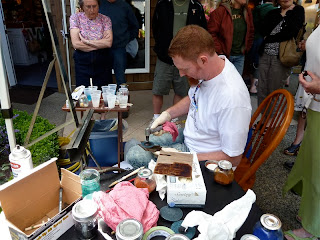 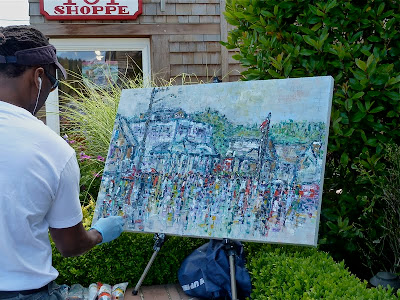 There was an art festival this weekend, called the Plein Air Art Festival. Plein means "open", (in what language, I don't know), but it was the third annual open air art show set up all over town in Cannon Beach. We didn't get to see too much of it, as the streets of Cannon Beach were packed with traffic and it was difficult to find a parking space. So Eldy dropped me off and circled the outskirts of town so I could check it out a little. There is a shuttle service between Tolovana, either a little town or a nearby parking wayside/beach access, and Cannon Beach, but we didn't have the details to use it this time....That would be a great way to come into Cannon Beach on the weekends so you wouldn't have to fight the weekend crowds when something special is going on. 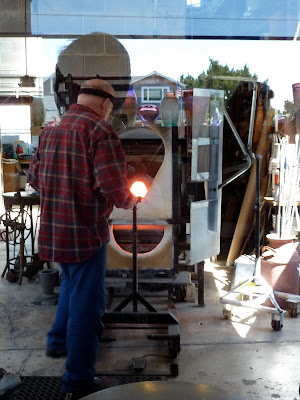 Cannon Beach is such a cool town...tons of shops nestled in alleyways and little boutiques everywhere catering to just about any interest. The usual nautical stuff, knick-knacks, kite shops, antique stores, a yarn shop, (Uh-oh! Did you say YARN SHOP? worries E.) Yes, and I've already been there three times on fact finding missions, dear! For you gals who knit, it's called Coastal Yarns and they have a website, too!

I stopped in a glassworks studio to watch a glassblower at work...He was making some garden glass flowers but hadn't gotten very far along in the process yet. They don't offer glass blowing classes at this store, as far as I know, but there is a place in Astoria where you can take a class to make your own glass paperweight. That's still on my bucket list of things I want to experience some time.

There were quite a few artists on the street set up with their easels. One was doing some torch work on metal and had quite a crowd around him. (top photo) I think the creative process is quite interesting to watch when it's another person doing the creative thing. I am creative in some ways, but I love to see people who are creating in mediums I've never tried--oil painting, metal work, and other things.....Then we headed down to Haystack Rock to see all the kites flying and an awesome kiteboarder who was extremely skilled at his craft. He did a big wave jump that was awesome! We were debating renting some beach cycles but decided to save it for another day. 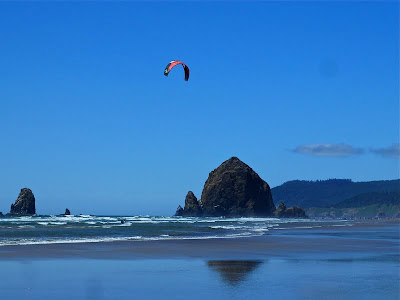 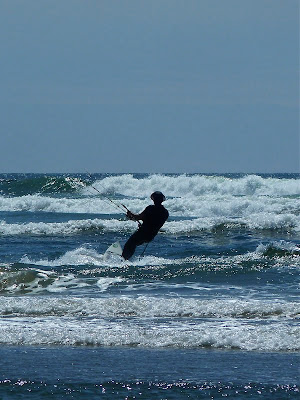 All this beach walking and talking about riding beach bikes worked up our appetites so we ended up at the Shiloh Inn hotel dining room back in Seaside, which had a lovely view of the beach at Seaside...we could have sat outside, but sat with a bird's eye view of the beach inside without the stiff winds blowing at us. They had an appetizer--Gorgonzola potato wedges.....delicious! Eldy had fish and chips, I had a Kobe beef burger which was awesome. Kobe beef is sort of like organic beef, the way I understand it, raised a certain way from a certain strain of cattle from Japan called wagyu. It's very tender and flavorful.  A nice glass of wine for me, a beer for Eldy, and we said our thanks for a wonderful day in Seaside, Oregon....
The weather has been very pleasant, we're surprised...usually the weather is usually much more cloudy and rainy in June. Most of our days here have been a mix of clouds and sun. Temps are in the 60's...love it! Tomorrow, a hike, maybe, at Ecola State Park. We'll see you on the trails.....
Posted by Jeannie and Eldy at 12:55 AM