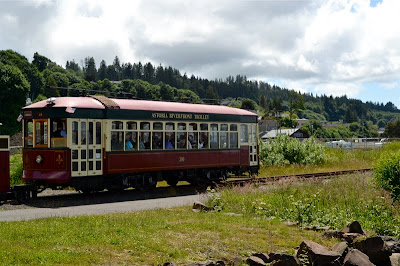 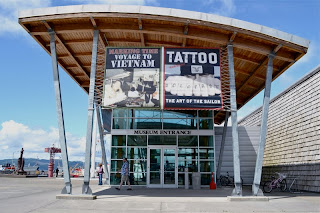 The town of Astoria has a cool observation column/tower, they have cool vintage architecture to explore, great places to eat, a little historical trolley ride that's cheap! AND a fabulous museum called the Columbia Maritime Museum. They don't allow you to take photos in there, or you would have seen why it's so terrific and why you need to go see it if you are in the area. (Some of their pieces are on loan from other collections and so photos are not allowed.) I was frustrated, but I behaved and did not take photos, although my camera phone called out to me in my pocket. "Use me, use me!" This is a well designed, well thought out, interactive museum of the nautical history of the area. An excellent movie about the river starts your educational journey about the Columbia River. There are fantastic full scale model ships on display, there are excellent and interesting quality videos running about the Coast Guard, the rescue training in Oregon, steamboat history exhibits, a special exhibit about Viet Nam, (we missed that corridor, darn it!) a full scale model of a famous lifeboat series (the boat was self-bailable and self-righting), and you can listen to real recorded rescues on the coast. There are wonderful exhibits about Astoria being the #1 salmon cannery in the world with photo documentaries about how the cannery workers felt about their jobs.

"Nobody minded the smell. It smelled like money to us. When the canneries were working, it smelled like we were really prosperous, so I'm sorry they are not here any more, really." Frankye Thompson, cannery worker---
As usual, we learned lots of really interesting things. Did you know the word "nausea" comes from the Greek word for ship? If I hadn't accidentally deleted all my phone notes from the visit today to the museum, I could tell you what that Greek word was! (nafat?) Phooey!

The Columbia River,  as it empties into the Pacific Ocean, is a swift moving, large volume of water passing through a narrow channel, carrying tons of silt and sand which are making constantly shifting and changing sand bars. Right where it empties into the Pacific Ocean, it meets the ocean with all the fury Mother Nature can muster. The two bodies of water collide with a vengeance. This is one of the country's most hazardous water areas, and it takes TWO types of pilots--river pilots and bar pilots- to navigate freighters through the river and what's called the "Columbia Bar"--a zone of about seven miles from the river channel to a buoy in the sea. The bar pilot's job is EXTREMELY hazardous. We asked one of the volunteers what a bar pilot's job pay was, but nobody wanted to say or they honestly didn't know. I'll bet it's a LOT! And they deserve it after seeing the pounding, 40 foot waves batter freighters around like bathtub toys! The lifeboat in one of the galleries that was used for many years of service was very interesting to read about. This boat was tumbled end over end in the waves and would still right itself and come to the rescue! There are outstanding schools in the area for rescue training and they are right here in Oregon.

There was a terrific exhibit about tattoos--the history, video recordings of sailors talking about getting tattoos during the war, videos about famous tattoo shops, videos of how tattoos are done in the islands, in the U.S. back in the day and how they are done now. In the islands, nails were attached to the ends of sticks and then the design was tapped or pounded into the skin with another stick. Some people think the word "tattoo" has origins in the tapping sound of the tools used to make them. Some cultures used CHISELS to make their tattoos, then rubbed pigments into the wounds to dye the tattoo. Ee-e-e-ow!  Modern day tattoo electric machines use multiple needles that pierce the skin 80 times a minute. (Oooooh, that hurts no matter what way you do it!) We learned what certain types of tattoos signified in the early days...like an anchor which signifies the obvious--"holding fast during storms" and many more interesting ones. We learned that sailors were VERY superstitious. Many of the tattoo symbols were to "protect" them from harm.  Great exhibit, and I think I am no longer interested in EVER getting a tiny little tattoo...(You REALLY weren't thinking about getting one, right? You'd better not!)  Guess who that was?! 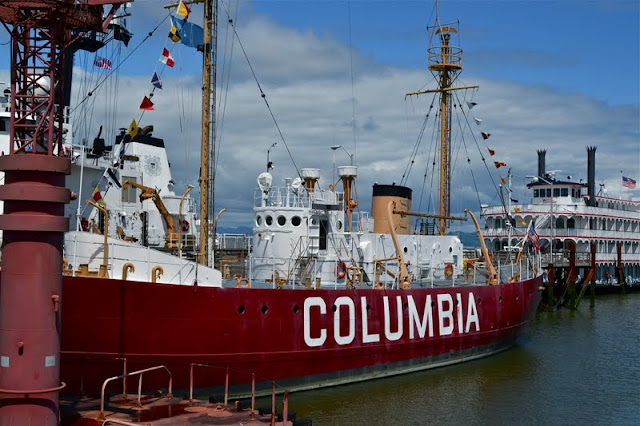 After the tour inside, your 10.00 admission ticket gets you onto a lightship, the Columbia. You've heard of a lighthouse? Well, this is a lightship. I'm not sure how a ship manned and outfitted like a little city is more stable or less dangerous than a secure, cliff built lighthouse, but there used to be lightships in service on the coast. I guess these were used to serve where a major aide to navigation was needed, but maybe conditions for construction of a lighthouse were impractical.  The lightship marked the entrance of an important river like the Columbia. It would remain anchored in one place, in this case five miles out to sea. The Columbia stored more than 12 tons of food, 13,000 gallons of fresh water, and 47,000 gallons of fuel on board. Thirty foot waves were common during winter storms and even the most experience seamen got seasick. The ship bobbed like a cork instead of rolling with the waves...uh, excuse me for a minute, I think I need to visit the ladies room...I don't feel so good! You get to walk around the ship, see the living quarters and talk to a retired Coast Guard guy if you have questions, like how much does a bar pilot make a year?

I googled river pilot for the area and the annual average salary was stated as over $200,000, so I'm assuming bar pilots make more. When you see them trying to board the freighters in the pounding waves, you can see boarding and exiting the ships they are going to be navigating through the river bar is the most dangerous part of their job. Maybe lifeguard on the Pacific coast sounds better at this point. (Eldy wants to know, hey, Sparky, did you see where Santa Monica, CA coast lifeguards make over $100,000-200,000 a year?) Yes, I did, honey....There's a lot more to that story..paramedic skills, etc. etc. But boy, do they have a retirement package! But hey, I digress...So many things to read about and learn about...fascinating history in this area, and the maritime museum is one cool way to learn about it. We HIGHLY recommend this museum to all. (Hm-m-m-m, maybe we should start a rating system for this stuff....) (Sparky, time to get off line and let people read other blogs and stuff!) ....I must have had one too many Cokes today.......Sorry! See you later.....
Posted by Jeannie and Eldy at 9:30 PM