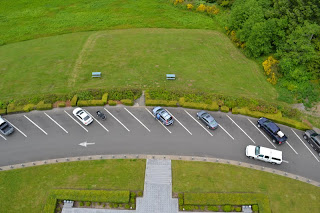 Astoria has the coolest tower in town....a column built in 1926 with an observation deck on top, you just have to climb 164 steps up to the top and out through a door to get there. It's just like climbing a set of lighthouse steps. Been there, done that...(And you're gonna be sore tomorrow, reminds E.) I huffed and puffed my way to the top. And where's Eldo, you ask? Down at the bottom standing beside the third car from the left. (His knees aren't quite up to that).  And you can't be afraid of heights, because if you look down, you might get a little queasy in the stomach. There's not much room between you and one step off the side of the structure, with nothing but a thin railing. I was fine until I looked down...the trick is look OUT at the scenery, not down. (I could have told you that, Sparky!) There's not a lot of room for many people to be at the top, but today was a good day, just three or four people besides me ventured to the top to look out over the beautiful Columbia River valley...It only cost a dollar to park in the parking lot to go up and see the view..what a bargain! And there is this cool Chinook (?) canoe at the site as well as beautiful grounds around the tower. 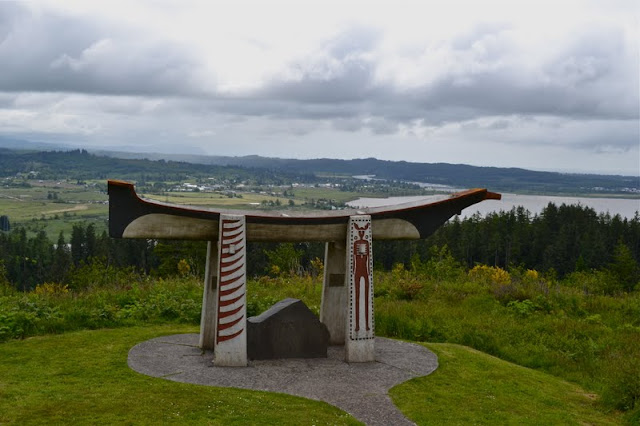 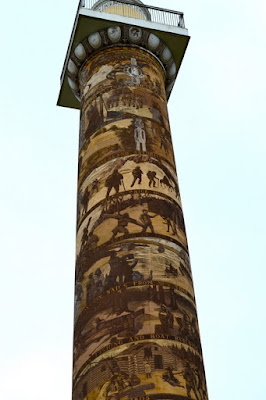 An Italian immigrant artist, Attilo Pusterla used a bas-relief technique called sgraffito, an Italian Renaissance art form that combines paint and plaster carvings to decorate the outside of the column. There are 22 significant historical events that occurred in this region on the concrete column.


Although Astoria is a small town of about 10,000, it is the "cradle" for America's claim to the Pacific Coast. Some of the events on the column are pictorial murals of: before the white people arrived, Captain Robert Gray arriving on the ship Columbia in 1792, the Lewis and Clark expedition crossing the mountains in 1805, Indians greeting the explorers, Fort Clatsop, the Astor Overland party leaving St. Louis in 1811, the coming of the railroad in the 1880's and more.....The column is a series of burnished brown carvings etched into the plaster, it's beautiful. It's a salute to Astoria's early explorers and early settlers, celebrating their role in the United States march to the Pacific Coast.


If you "unwound" all the artwork, it would be over 500 feet...It's on the top of Coxcomb Hill (600 feet up) in the town of Astoria and it's a beautiful drive to the top....The column itself is 125 feet tall. If you are not up to climbing the steps, it's still a beautiful historical monument to see on the outside. The views are fantastic! 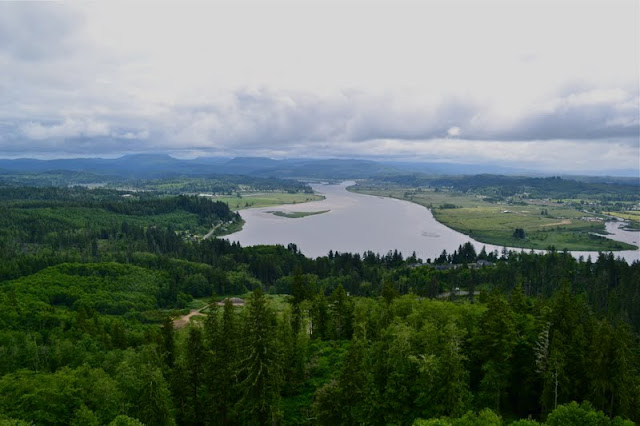 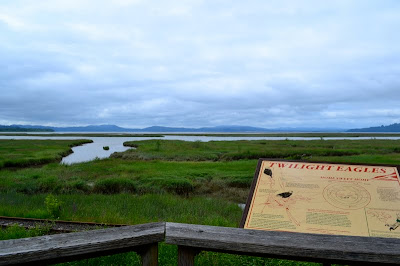 After negotiating the steps to the top of the column, I decided we should go see an eagle sanctuary nearby Astoria. Out highway 101, which becomes highway 30, we headed east just a few miles outside of town to the Burnside Loop turnoff, take a left off the highway. There's a little wayside there, and a beautiful wetlands and observation deck to see eagles. That area is supposed to have a high concentration of bald eagles. We didn't see any! No nests or any magnificent birds...nothing even flying! Wrong time of day...Dawn or dusk is best, and low tide. We were there at high tide and the middle of the afternoon, we didn't see a thing but a beautiful wetlands. That's ok...we might go another day...


Astoria is a beautiful old harbor town..and the HILLS! They reminded us of San Francisco. There are some other cool things to see there--the Flavel House, an ornate Victorian museum....freighters,  a nice boardwalk for walking, a trolley car historical ride for a dollar or two, a great beer pub--Rogue Public House, on the Columbia River at Pier 39, just east of Astoria. It's got the best beer batter onion rings we've ever had and Kobe beef sliders (mini hamburgers with Wasabe mayonnaise--delicious!) We had delicious spring greens salads with craisins in them along with our mini burgers-- yum! 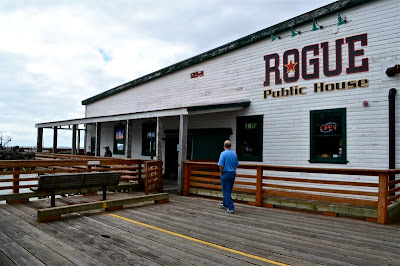 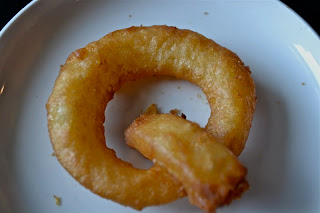 Rogue is an Oregon brewery company that makes wonderful beer. I'm not a beer drinker, but Eldy has enjoyed the different varieties in the last couple of coastal towns where Rogue has a presence. They also have a different philosophy about brewing as you can see by the names they give their ales and beer....And the big Question of the day is, who would want to drink these oddly named beers? Plenty of folks, it turns out!


I'm not sure I'd want to drink this one on the left if it had beer in it, even if I WAS a beer drinker, which I'm not! Each day they bring you a different large "shot" glass sample of the beer of the day. This was our second time there, so Eldy's had "John Juniper" the first time (his favorite) and "Chipotle". Yes, there actually was a chipotle flavored beer on the list...More power to ya, guys! Bottoms up!

Email ThisBlogThis!Share to TwitterShare to FacebookShare to Pinterest
Labels: Astoria column and Rogue