Things to Do in Tucson

The list of things to do in Tucson is a huge list. We are covering a few things that DON'T have to do with eating in restaurants--(WHEW! That would break the bank, laughs Eldo) art, culture, and sports--not because we don't enjoy those things, but because we are here for just a short period of time, for two weeks, and Sparky is into NATURE, as you probably already know, if you've been following us. So Sparky's posts are more about biking as a senior with a hybrid Trek bike, a museum or two, and anything else we come across.

We visited the Pima Air and Space Museum as it is about two miles from the park. It was very cool and we highly recommend it, especially if you are a history buff, or an aviation guy, or a veteran, or someone who enjoys learning about something that's not in your usual orbit. (Haha, see what Sparky did there?)

Lots of planes, jets, inside and out. Lots of information and cool facts about aviation pioneers, early planes, famous people, and evolving technology. Below is the smallest flying plane every built--the Bumblebee. Isn't it cute? It has a wingspan of only 6 ft. 6in, with a maximum speed of 180 mph. It was designed for the sole purpose of taking the record for the world's smallest aircraft in 1984 and designed by Robert Starr. The record didn't last long in the Guiness book of records. One of the designer's former partners built a SMALLER one, a single wing design plane. Guinness gave Starr the record for the smallest bi-plane. In 1988, Starr built another bitty plane and broke his own record. 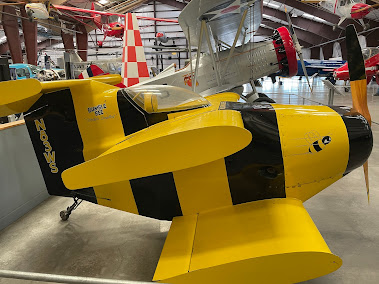 Lots of military planes and history on museum grounds here in Tucson. And, the aircraft are displayed up in the air as well! 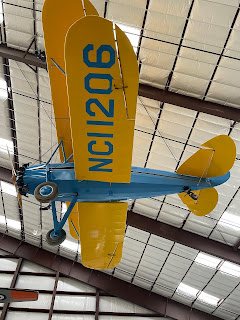 Below is one of the most famous helicopters, the Bell UH-1. The army designated it as the HU-1.You probably know this one as the "Huey", used in Viet Nam. The first Hueys flew in 1958. They were heavily armed and provided armed escorts for troops. The one below is the Sparky likes the nose designs on many of these aircraft. Each company would paint special designs on the noses and/or the bay doors. They look ferocious! Guess that is the idea, scare your enemy or at least worry them. 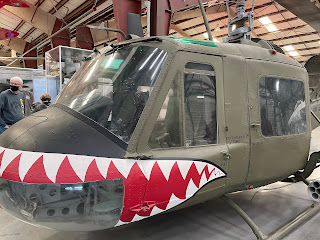 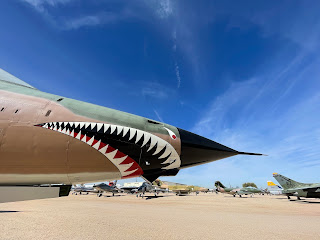 Sparky saw needle nose shafts on most of the jets. They looked like they were spears. For a brief moment, she thought that ok, if they were going to crash, the idea was to stab something upon landing, but she knew that wasn't it. 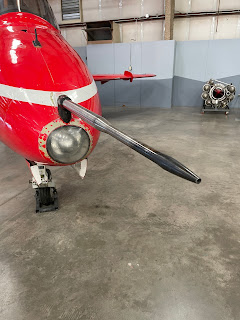 The tubes are called pitot (say "pee-toe" tubes), named after the French guy who invented them. They are flow sensors, they measure the speed and pressure of air, liquid, or gas. They help a pilot gauge and measure  airspeed and altitude. They are usually found in the front of the aircraft, but they can be in other locations on the aircraft as well. When  school kids come to the museum, they might play a game, "Find the pitot tube" Sparky was on the lookout the rest of the visit, seeing where they were.

Sparky learned about different wing designs....the Delta wing, the variable geometry wing, (they move back and forth and help aircraft take off in short distances) and how about these wings listed below? Geometry anyone?  Uh, no thanks, math was and is not, Sparky's forte. BUT-just so you know, in case you did want to know and impress someone, the dihedral wing design (upward wing span) is on most commercial planes. 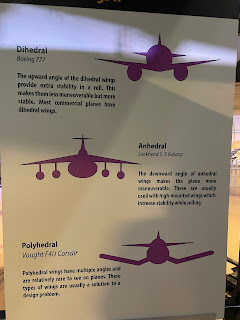 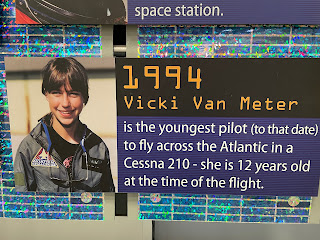 We also enjoyed seeing the Presidential jet that carried Presidents Johnson and Kennedy, a Mars landing rover, the Apollo cockpit simulator, (Yikes! Unbelievable number of gauges and dials!) the B-52 bomber that was so huge, the black Sikorsky helicopter, jets that were in movies (Top Gun) and even art done on the aircraft themselves. 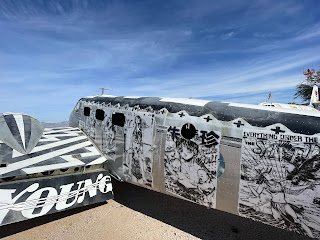 Inside one of the hangers is a cool K'nex (building blocks for kids) panel of the space shuttle Columbia. And, Sparky impressed her grandson with her sitting in an old simulator. His response?  "WHOA!" 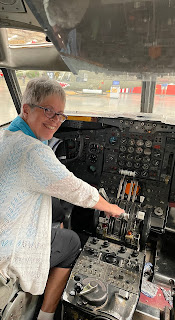 One of the coolest exhibits was a reconnaissance spy plane, similar to the one Gary Powers (for you old folks) that was shot down in and he was captured in 1960 in Russia. This was a super secret spy plane with a bunch of different serial numbers and names, trying to disguise the fact that we had such an aircraft, and it carried a drone as well. It established speed and altitude records--2,193 mph., and 85,069 feet in altitude. It could fly from New York to London in 1 hour and 55 minutes. It was darkly beautiful.... 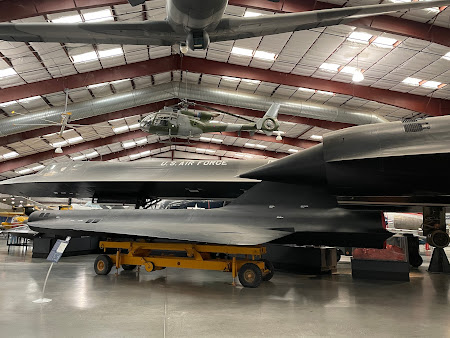 We really enjoyed our trip to the museum today...we highly recommend it. The place we REALLY wanted to visit was the historic Davis-Monthan Airforce Boneyard in Tucson. It's a preservation/graveyard for planes, the largest in the world. There are more than 4,400 planes stored here, but it's permanently closed. You used to be able to tour the facilities, but no more. (See first photo above).

With the humidity levels from 10% to 19% and only 11" of rain annually, hard soil (the planes can be moved around without the necessity of paving) and 2500 feet of elevation, it's the perfect place to store planes. Some of the planes are there for preservation and some are there to be used for parts. It's a shame you can't visit it any more...here is a link to what they do there....https://www.airplaneboneyards.com/davis-monthan-afb-amarg-airplane-boneyard.htm

The weather is so beautiful here! Glad it's not summer, though, we'd be long gone. Temps in the 60's and low 70's, nighttime lows in the 40's. Sparky is riding as much as she can with our remaining time here. Be sure to watch for the next blog for some bike riding in the biking capital of the world, Tucson, Arizona.

Email ThisBlogThis!Share to TwitterShare to FacebookShare to Pinterest
Labels: Pima Air & Space Museum, spy plane, the Boneyard, things to do in Tucson