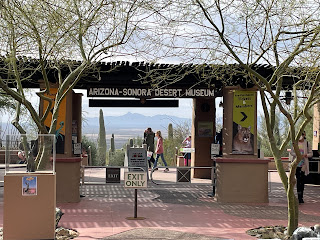 A visit to Tucson is not complete without a trip to the Arizona Sonora Desert Museum, just outside of Tucson on the south side. It's 26 miles from the Voyager RV park, and a beautiful drive into the Tucson Mountains to get there.

It's a zoo, a conservation park, a free flight aviary, an aquarium (you can feed stingrays for a slight extra fee), a hummingbird aviary, a botanical garden and much more, consisting of 98 acres and lots of walking paths to explore everything. It's 22.95 for seniors admission.

Some of the paths are uneven and loose gravel so if you are unsteady on your feet, you might want a walking/hiking pole just to stabilize yourself. It's definitely not wheelchair friendly on a lot of paths as you are going up and down little hills to explore. There are two miles of paths traversing the desert with beautiful vistas in all directions. 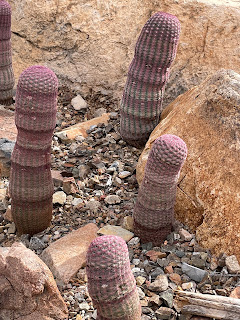 There is a beautiful cactus garden. Sparky loves learning about new species in the specific areas we travel too, and this garden was AMAZING! By now, we are familiar with saguaro and pipe organ cactus, but how about rainbow hedgehog cactus? (seen at the left). Sparky saw flying saucer cactus, fishhook barrel cactus, teddy bear cholla (say "choy-uh"), beaver tail cactus, and many, many more. Did you know cactus are found in other areas besides the southwest? There are cacti in southern Canada. Mexico has the greatest number, (no surprise there!) with about 850 species. 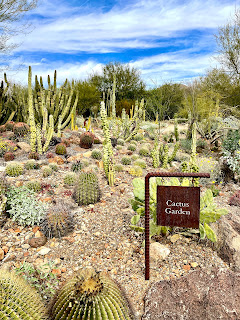 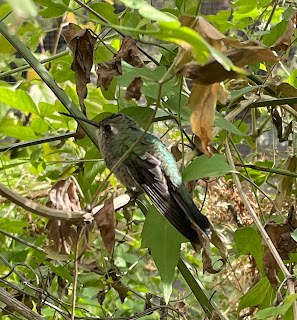 We've mentioned ocotillo (say "oh-co-tee-yo) and have seen the plain, tall, ugly. spiked dark branches so far, but the desert is starting to come alive with blooms. Ocotillo bloom every April, regardless of rains, and hummingbirds LOVE them. The greatest number of hummingbirds is during this time as well, so a mutual admiration society!
Other cactus can start blooming in late winter months, sometimes January heading into spring, depending upon the variety and conditions, but most will start to bloom in March or later.
Here is a view of bare ocotillo on the right as you are walking down one of the desert paths. 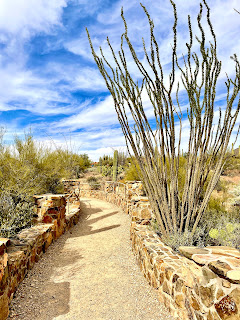 And here is an ocotillo starting to green up. 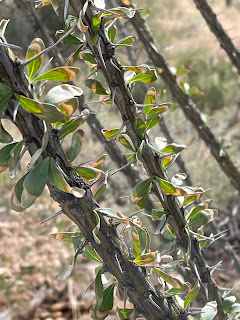 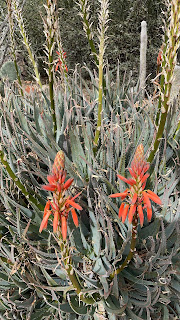 A view of a palo verde tree (translates from Spanish for "green stick") with distinctive green bark and branches, they are all over the place in Tucson. 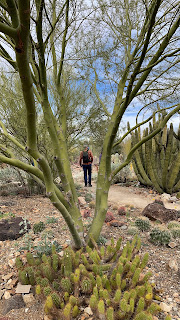 Sparky had never seen so many different cactus varieties in her life! Each cactus in the garden has a sign showing what it looks like when it blooms. 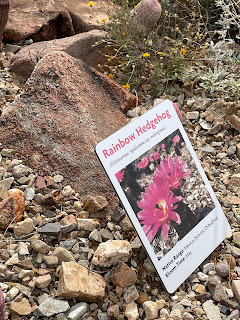 There is a sting ray tank where kids and big kids can touch the rays as they swim in never ending circles, which is a minimal extra charge.

Sparky's favorite part was the hummingbird aviary. She only had her iPhone, but there were four varieties of hummingbirds currently there, and they were beginning to nest. Sparky caught this hummingbird hanging out. Broad billed hummer, she thinks! 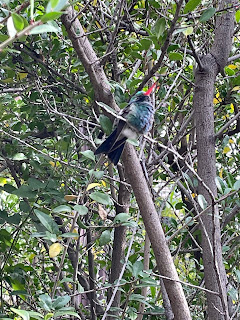 There was another one in a branch who posed just a foot or so away from everyone walking by. Very beautiful but small aviary to sit and watch the hummingbirds thrum by you, whizzing and darting around, and occasionally posing in a branch for quite a while.

There were coyotes in a fenced in area, looking bored, but as it was a VERY windy day, they were trying to keep warm by soaking up sun on a rock. Coyotes are definitely in the area! This sign was OUTSIDE the museum towards the parking lot. 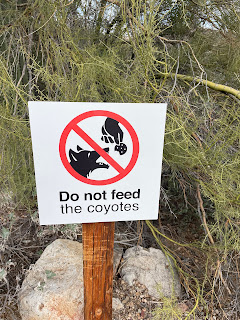 Javelinas ("have-el-een-a) were under a stone bridge. Javelina teeth grow until the animal is four years old. They sharpen themselves as they rub together. Javelinas don't bother humans but if threatened, they can bite! They are also smelly, emitting a musky odor when you get near them. Which you shouldn't, but the odor does carry a ways.

There were several ramadas, shade structures-- for relaxing, learning, or respite from the summer heat. The Tohono O'odham, a Native American Tribe that lives in the Sonoran Desert, built this one at the museum, out of mesquite branches and a saguaro rib roof. They are like arbors and are open to the cooling winds during hot summers in the desert. 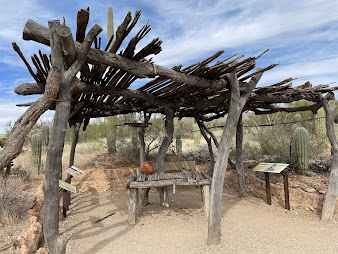 Even the entrance to the museum is beautiful....statues in the entryway, and beautiful Arizona rocks and boulders. Look at the colors in this boulder! Bet this area is amazing for rock hounds! 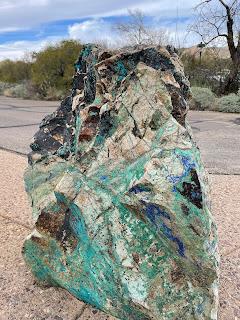 We highly recommend a visit to the Arizona Sonora Desert Museum, if you visit Tucson. See you down the road...Next up, a fabulous bike ride on the Loop Trail in Tucson. Bye for now!
Posted by Jeannie and Eldy at 12:29 PM