And Everything Comes to a Halt for the Moment 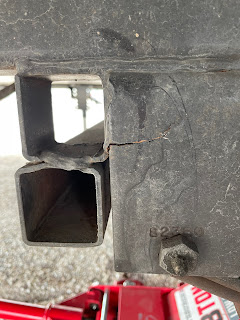 Back in late summer of last year, we had a suspension bracket break behind our wheels of our fifth wheel. It could have been disastrous, but we were lucky. We were able to get it repaired, before the tires had gotten too close to each other, possibly rubbing enough friction to start a fire or explode a tire. We found an excellent body shop guy in Ashtabula, OH, who welded and repaired the broken bracket with a new plate. We had been watching the other side for a possible problem and here it comes. This was the crack (photo on the left) when we got the tires off and replaced in Tucson. We were ready to leave the next day so thought we could make it ok to Cottonwood. We did. BUT--this is the crack as we arrived in Cottonwood. We had some bad sections of I-10 but not sure if that made the existing crack much worse. Much worse than we thought. 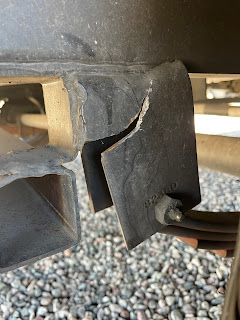 We are NOT going to drive the rig in this condition. We could limp to an auto body shop like we did before if we can find one in town. But, as we are here for 11 days, we are going to try and find a mobile tech who can come and make the repair on site. After calling around, we found one! We HIGHLY recommend Verde Valley Auto Electric, and specifically, Jack Crow. He moved his schedule around, so he could get to us before we were scheduled to leave Jan. 31st. He was professional, kind, and knowledgable about all things RV. The only things he said he doesn't work on, are black tank issues. Can't blame him there. The price of the repair was very reasonable and he did some major welding and reinforcing so the bracket should hold for a long time to come. The one thing we learned and didn't realize that those suspension brackets don't always break because of driving on bad roads (as Lippert, the manufacturer tried to tell us) but that if you make severe cornering turns while maneuvering your RV into tight places and difficult sites, you are stressing the suspension bracket to the max. He said that you can tell that's happening when the tires appear to flex abnormally so like when the fifth wheel is at a right angle to the truck. Sparky had noticed this a time or two, but didn't realize it was not a good thing. Sometimes you are forced into backing into very tight spaces with very little room to maneuver, like no room in front of you to pull forward and back. 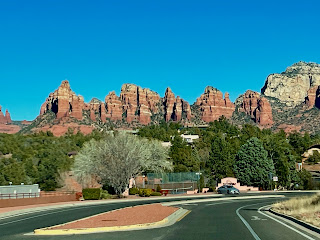 In the meantime, as it is the weekend, we are exploring the area. We took a drive into Sedona, just to see how much it's changed in the 10 years since we've been there. It's gotten more developed, as expected, the crowds seem bigger despite Covid, but the scenery remains as spectacular as ever.  We are about 25 miles from Sedona from our RV park.
We attempted to visit the Chapel of the Holy
Cross, built into the side of the mountain in Sedona, but the parking areas are very restrictive and tiny-- it was impossible to get in on an early afternoon the day we tried. It's a must see, if you can time it right. 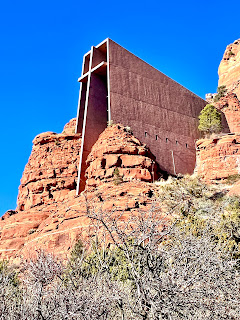 Sparky has visited Dead Horse Ranch State Park three times. It's 7.00 each time to get in, or you can buy an annual pass for 75.00 plus a 7.00  handling fee. We just couldn't decide when to buy it and when we would be back to AZ to use it to pay the yearly amount so for now, we will see how much more we want to visit the state parks. Dead Horse Ranch State Park is beautiful and big, 423 acres. There are 10 miles of hiking trails, 150 campground sites, some big rig friendly, and beautiful changes of habitat as you make your way through the park. 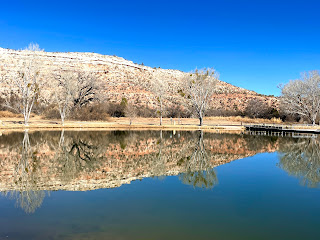 There are three lagoons that you can get an easy hike in of about 2 miles or more by going all the way around them twice. There are ring neck ducks in the pond, and the scenery is beautiful. That's one thing we have noticed about this area. Cloudless skies are common and the day time temps, although cool in the fifties, are very warm in the sun. 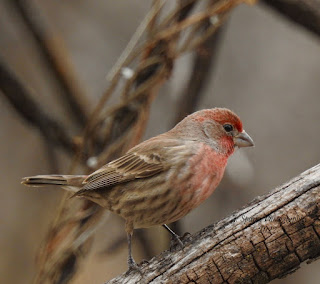 There is a birding area at Dead Horse Ranch. They put out some feeders and thistle seed socks. That usually attracts a lot of birds! The first time Sparky went, there were birds galore....house finches, goldfinches and more. How about a bridled titmouse? Sparky loves learning more bird species and plant species in Arizona.

The other two times, there were no birds. Phooey! Must have been the time of day, which was midday the second and third visit. Best to go early morning or late afternoon. Nice walking trails in the park, no elevation or climbing....You are traveling through very old cottonwood and aspen forests in the birding section area which is off Owl Road.

There are other trails available that connect to other parts of Cottonwood, such as the 15 mile old wagon road Lime Kiln Trail, which connects Dead Horse Ranch to Red Rock State Park, and is a shared use trail, but Sparky wants to do more serious hiking and climbing in Sedona after doing a terrific hike recently. (See last blog post, about Devil's Bridge.) It's going to be hard to top that one! 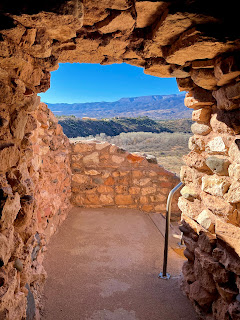 Sparky also visited the Tuzigoot National Monument nearby in Cottonwood. Don't you just LOVE that name? It's Apache for "crooked water". Sparky went to visit it just because of the name. It's a national park service site, so be smart and have your senior pass with you so you don't have to pay 10.00 to visit. (I'm always telling her TAKE YOUR PARK PASS WITH YOU! says an exasperated Eldo.) This monument is dedicated to preserving the history of the Southern Sinagua, who lived in Verde Valley thousands of years ago and flourished. The Sinagua lived by farming, hunting, and gathering. When they lived in the area, water was plentiful and the land was fertile. Their pueblo dwellings were huge and made from cobblestones. The original village was two stories high, and had 87 ground floor rooms! There were few exterior doors, they used ladders through roof openings. It's hard to imagine the original structures from cobblestone ruins, but the park service does a great job with signage and information about these Arizona peoples. Both this site and Montezuma's castle (which your entry fee ALSO covers) are worth visiting to learn more about the Sinagua. Montezuma's Castle is 33 miles from Tuzigoot Monument. It is also a Sinagua dwelling, in a cliff recess 100 feet above the valley. Both sites have a nice, short hard surface walking trails with signage to learn more about the area and the people who originated here.

We are headed out in a couple of days for Mesa, Arizona. We will be there a short while, and then back we come to Verde Valley. There is so much more to see and do here!  We hope you are enjoying and learning along with us, we so appreciate those who stop to read and see what we are up to!  See you later down the road.....

Posted by Jeannie and Eldy at 9:38 PM