Dang Those Asian Lady Beetles But Other More Important Stuff

We are STILL battling those dang Asian Lady Beetles. They must be thoroughly entrenched in the inner workings of the ductwork, AC lines or hanging out in the nooks and crannies of our fifth wheel. Sparky is still spraying, but although the beetles are croaking, more still fly in and around and get in through nooks and crannies in the RV. We can't believe they are here in Arizona, we think they have stowed away in ductwork or the slightly less than airtight spaces around windows and vents and are having big family reunions and baby showers. Sparky has sprayed three times, but the smell of the Raid Flying Insect killer spray is so potent, we have to leave the rig for hours at a time for the smell to dissipate any time she uses it. So it's been used very sparingly, and apparently not enough. We're down from killing more than 50+ a day, to maybe about 20. They are just so annoying and still smell awful just like stinkbugs do. We have a few of those as well. Guess they really like our rig! Sigh...... 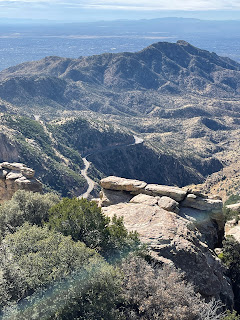 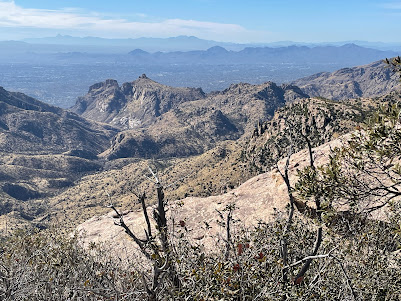 What's Tucson like? Deserty and dry, LOTS and LOTS of sunshine  but very pleasant temperatures, in the 60's and 70's during the day, 40's and 50's at night...Dew point is 34 degrees, humidity is 43%.  That gives you some idea of how low the humidity is here...Just the opposite from Florida, where the dew point is around 65 or higher with humidity percentage in the 80's currently in southwest Florida. Even though it got colder in the higher elevations, it was very comfortable with just lightweight layers. 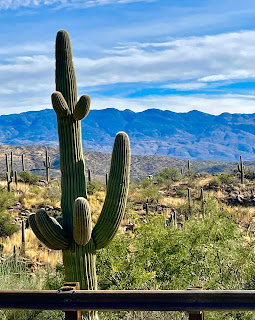 The highest point of Mt. Lemmon is 9,147 feet. It is also the southernmost ski destination in the United States. Mt. Lemmon gets over 200 inches of snow annually! The drive was closed as recently as last week due to heavy snow, so we picked a great day to go, as it was open today. 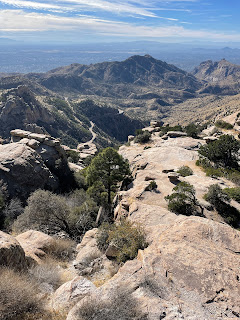 There are MANY pullouts and stopping points along the way to admire the scenery. A visitor's center is located at mile 19.6. 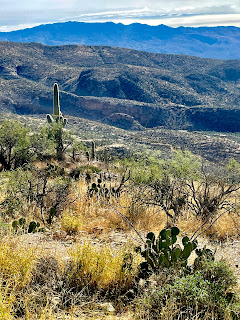 The snow started being visible around 7,000 feet, and the temperature dropped from 71 in the valley to 43 degrees by the time we got to the top. 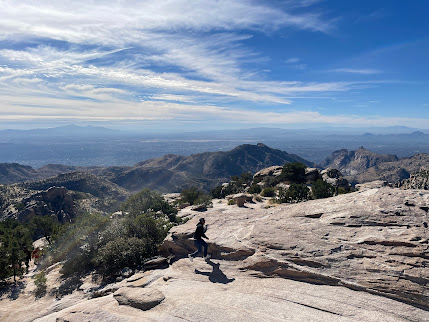 The vistas were outstanding! The saguaro cactus are everywhere! 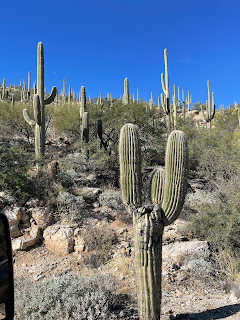 Sparky gets excited as soon as she sees snow. (Oh, boy...that means I have to dodge a snowball or two, laughs Eldo.) Yep, Sparky lobbed one at him when he wasn't looking. She got one right back. 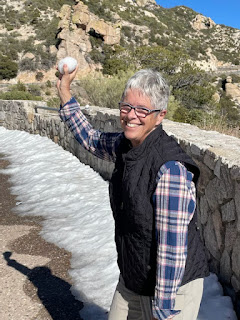 Our favorite stopping point on the drive was Windy Point Vista at mile marker 14. See the people on top of one rock overlook to the right? Sparky clambered over there to get on the rock so Eldy could capture the shot from a safe distance, lol. 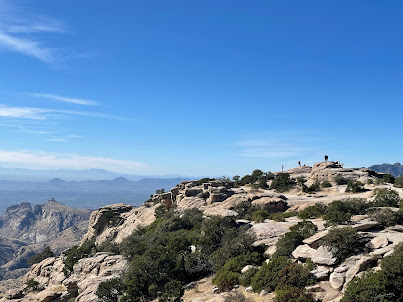 The geological formations of granite and other types of rock formations known as hoodoos, (much more common in Utah) and the wide variety of habitats from desert to pines were fascinating to see. 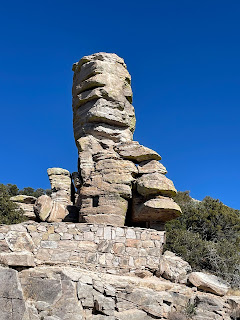 We saw bear signs and deer signs and LOTS of "watch for animals" on the way up. There are numerous hiking trails as well. They looked super rocky and steep. We saw many cyclists in training bicycling up the mountain, and careening back down. Sparky was happy to see quite a few women riding up the mountain. And, we saw locals take their kids up to the mountains to experience snow and sledding. Every little hill in the higher elevations had families with round sled discs sliding down the tiniest of hills, but yet, still a great thrill for them for sure. If it had a slope, or was an icy ditch, there were kids slipping, sliding, and sledding. 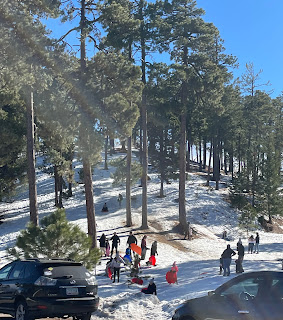 There are LOTS of nature and cool things to do while in this area, so we hope to be able to try quite a few! Sparky has heard there are some really neat eating establishments. (Uh-oh. There goes the food budget, but then again, we don't have a food budget, because Sparky hates to cook! explains Eldo.) Looking forward to exploring Saguaro National Park and other places soon...

Sparky is exploring the local flora and fauna. This was a blooming agave plant. Some of the agave varieties are called "shin dagger agave". Sparky found out immediately why while trying to capture the bees on the blooms. OUCH! 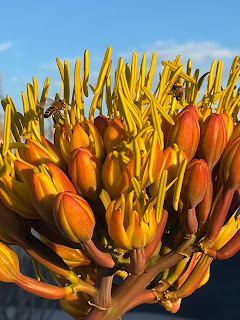 Another beautiful day in Tucson, Arizona. It's super windy today...looks like a day for laundry and tire shopping. We have to order four new tires for the RV as we are currently using the spare after a big blowout a few days ago....We bought the RV used so we really don't have a good idea how many miles are on the tires. Time to replace with a new set.  And with that.....We'll see you soon at the Saguaro National Park.

Posted by Jeannie and Eldy at 2:30 PM