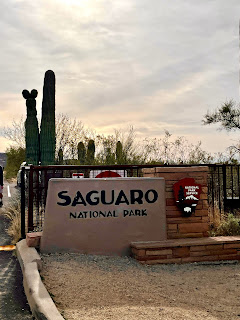 We did not know that Arizona had the Saguaro National Park, we had never even heard of it! Maybe that's why when we went to visit today, on a Tuesday, there just weren't very many people there, which made our visit really great! 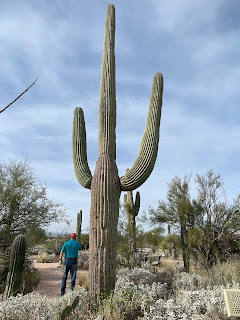 It's 23.9 miles from the Voyager RV Park where we are staying. There are two sections to it--The eastern section and the western section, separated by about 30 miles. The eastern portion is larger and more mountainous, the western portion is lower in elevation and has a denser saguaro (a type of cactus) forest. Most visitors come for the short scenic loop drive (about 8 miles) and short walks during the hot summers. The park ranks in the middle of size rankings, (41 out of 63) so it's not as congested as the bigger, more well known parks. There are quite a few hiking trails there, so Sparky will revisit the park soon to see what those might be like.

The visitor's center is small, but has a wonderful cactus garden walk beside it and a scenic loop drive as many national parks do, but it it quite short compared to others, about 8 miles and is a very narrow one lane paved drive with many very short pull outs.

Saguaro (say- "suh- war-o") is a tall cactus variety with "arms" usually.  We learned a lot about saguaro and other varieties today. Saguaros grow very slowly in their first ten years--just a few inches. Branches or the "arms" as Sparky likes to call them, don't start to appear until the cactus is 65-70 years old! When the saguaro is about 35 years old, it starts to flower. 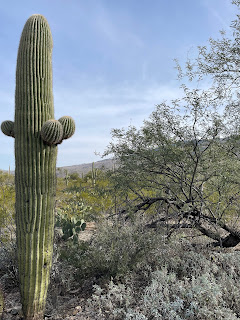 An adult saguaro is generally considered to be 125 years old. It can weigh up to 8 tons and be as tall as 50 feet. This saguaro is a century old in front of the visitor's center at the national park. The average life span of a saguaro is about 150-175 years old. Can you see Sparky standing next to the saguaro? 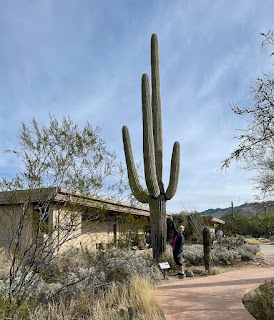 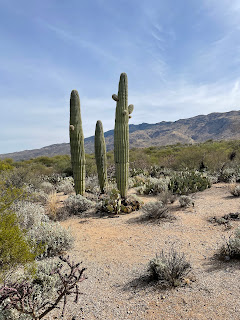 The saguaro hosts a LOT of animal life in the Sonoran Desert. Woodpeckers make their homes inside, when they abandon the cactus, wrens, finches, sparrows or owls move in. Hawks use them for resting and perching. The saguaro's fruit is a source of moisture and nutrition in late summer. Other animals like mule deer, jackrabbits and bighorn sheep eat the flesh of the cactus. We saw a section of a dead saguaro and were amazed at how thick the walls were! 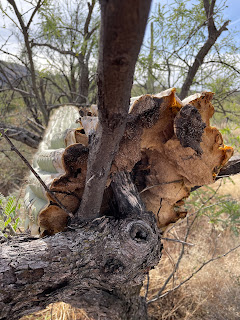 The saguaro has radial roots that take in as much water as possible during a heavy rain. The cactus has "pleats" that expand and contract depending on the amount of rain and moisture in the plant. 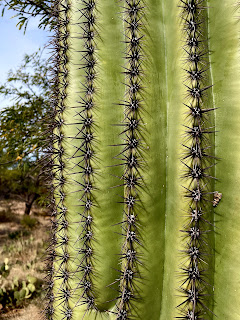 There are other many beautiful cacti in the desert. Sparky has been learning about some other types as well. There are a LOT of staghorn cholla (say choy-uh) here...They look like dark ropey stems. This one has blooms beginning on it. We imagine that the desert is going to be AMAZING when the cactus begin to bloom everywhere. It's a couple of months yet, to peak bloom we think... February and March would be great months to see the amazing variety of blooms in the desert.The prickly pear blooms in early May, the saguaros in mid May to early June. The stag horn cholla is not a very pretty species...There are other chollas that are much prettier....But when they get blooms on them, they must look a lot better when they flower! Kind of like the ugly duckling turning into a swan, haha. 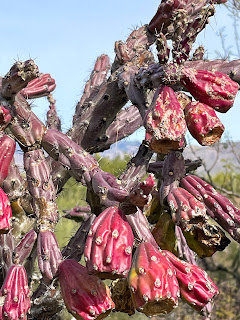 This is hedgehog cactus.... 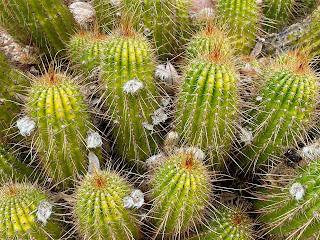 This is a dasylirion wheeleri or form of sotol...love that name. It's so symmetrical, like the spokes of a wheel or rays of the sun, kind of. It's a beautiful plant.... 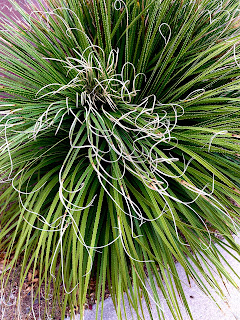 The Arizona desert--The Sonoran Desert in this area, is really beautiful, even if the cacti haven't bloomed yet. Here are some more saguaro sentinels.... 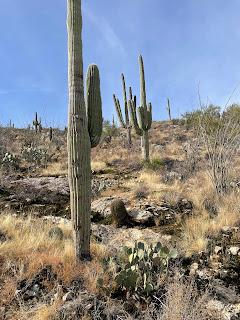 We think this is more cholla. It's a little prettier.... 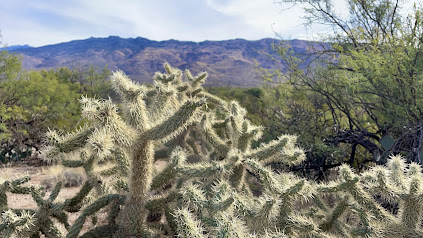 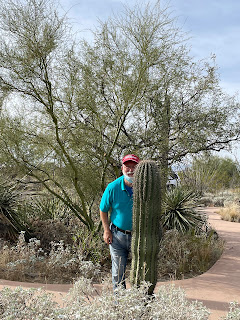 Sparky likes climbing anything......There are trails among rocks there. 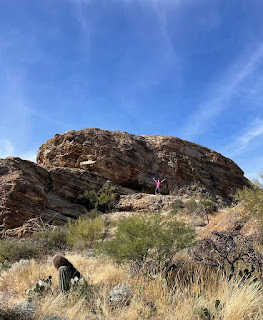 You have to share the very narrow loop road with cyclists, so be careful! 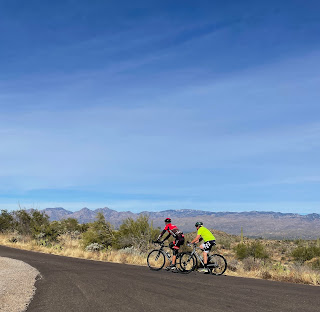 A very fine day, and it was beautiful weather to view the park. We highly recommend Saguaro National Park and will visit the west side on another day..... 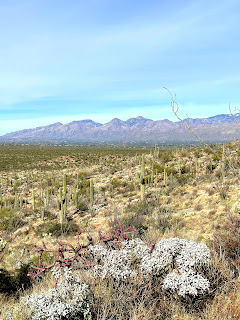