Before pulling out of the campground, we ALWAYS check our tire pressures on all four RV tires, and they have been consistently ok. We have been debating installing a tire monitoring system, but decided that we were on the fence about it. Many people have had blowouts despite having the sensors installed on their valve stems on their RV rig tires. The system is supposed to warn you of heat building up and impending air loss or when the tires get below optimal pressure. Sometimes the system dings when nothing is wrong, and they can be finicky to get them to work right. We used one on the class A motorhome we used to have years ago and they were a pain in the patooty. But that is all about to change.

We enjoyed today's journey through the Hill Country of Texas. We passed through beautiful El Paso, with some AMAZING infrastructure. Their bridges and overpasses are a sight to behold! They used salmon and sage colors in their concrete work....They had lizards stamped across bridge facades....Mountain peaks along side cement walls.... 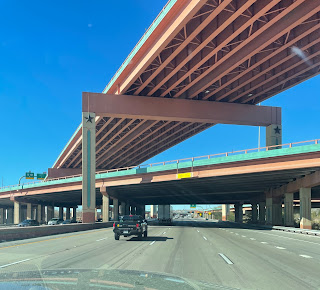 They had artwork painted into the concrete embankments.... 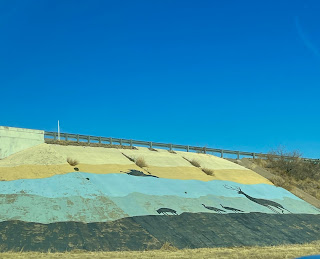 They had beautiful pedestrian and overpass bridges above the interstate.....Wish more cities would think about making ugly concrete be more beautiful and reflective of the culture of the area. 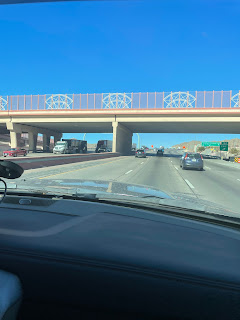 We got to within 5 miles of our KOA campground choice in Lordsburg, New Mexico, when we blew a tire. Eldy saw the rubber flapping in his side mirror and the tire smoking and rubber flapping in the wind. It was obliterated. It looked really bad. The debris damaged the fender a bit, but we weren't sure if there was any damage underneath to the jacks or the slides. We have no clue how it happened. We could have run over something in the construction zone just in the last 5 miles or it just blew. 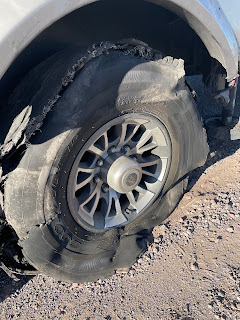 We quickly pulled off to a safe shoulder at the exit near a gas station and called our tire emergency service. We had a good spare and it shouldn't have been a problem, but it was. The spare is located under the RV and it takes a special tool to insert through a tube in the side of the rig to unscrew the tire and lower it down. We had never seen the tool for the spare, and proceeded to tear the rig apart looking for it. The tire emergency guy said he couldn't get the spare unless we had the tool to "unlock" it. We never did find the tool. The tire service guy left for another job and said he would check back with us later. (He never did). Next possible solution was to buy a new tire. We would just take the blown tire off and put a new one on and worry about the spare later. Think anybody would have the right size tire to replace a blown RV tire? Think again. After calling tire places all over the area, no tire and we were told good luck finding one. We put in calls to tech support from our dealer and the tire people (to try and figure out a way to release the spare) and they had some untenable solutions like cut a hole beside the tube and patch it later. It was getting dark, the sun was setting. We were preparing to spend the night in the rig with no solution in sight when two gentlemen came walking up to us.

They were dressed kind of strangely, in long khaki heavy duty garments. Eldy and Sparky were leery. We thought maybe they were from some kind of cult, dressed the way they were. But they seemed very friendly and offered their help. It turns out they were brothers from a local monastery dressed in work hassocks. We thought, well, why not? Nobody else had been able to help. One brother said that the other brother was the patron saint of mechanics. (!!!) Sparky thought, yeah, right. She still wasn't sure about these guys. She asked a little more about them. They were from the Our Lady of Guadalupe monastery, in Silver City, on their way home. They had tools, they had a truck, and they went to work. They got the spare off using an adjustable  wrench tool, and got it off within less than a minute by laying underneath the spare and using the wrench to turn the shaft to lower the tire. They used a big bottle jack to jack up the rig, and managed to get the mangled tire off with a great deal of difficulty, because the lug nuts were unevenly torqued from the last time the tires were serviced. 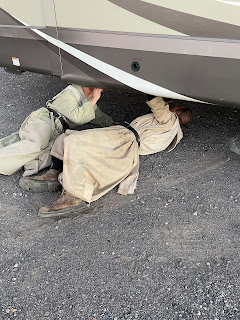 They got the new spare on, and we were good to go at about 5:30PM. We didn't get both their names, but we would like to send a prayer of thanks to the two brothers from the Our Lady of Guadeloupe Monastery, who came to our aid with smiles, (they never stopped smiling!) and didn't want to accept any payment. They said we could buy their coffee, The Abbey coffee, so we will! Here is a link to their site if anyone would like to try their coffee....https://www.abbeyroast.com 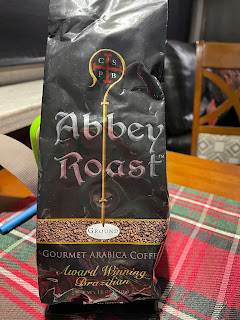 Sparky just about cried tears of joy at this wonderful example of kindness and generosity from two strangers who stopped by and were late for vespers, to help us get back on the road to our destination, just minutes away. It could have been so much worse. Our slides still work, our jacks still work, and as far as we can tell, the damage is cosmetic to the side of the rig. People sometimes get thousands of dollars of damage from tires blowing---suspension damage, damage to the RV, and months of waiting for parts and repairs. We were blessed to have been so close to our final destination that we were within minutes of where we needed to be. We were blessed to find a safe place to pull off to the side of the road where no cars were whizzing by within yards of where we had to park and where the guys could work with the tire. We were blessed with a visit from our guardian angels from the monastery who just happened to pass by us and stopped to help us, and blessed that it did not happen in the middle of the interstate in a big city.

Thank you to all who expressed concern and offered tips on Sparky's Facebook page....We are good to go (we think!) tomorrow to Arizona. But first, we are going to have a mobile tech come out to our site in Lordsburg, New Mexico at the KOA, which is where we landed for the night, to inspect underneath the RV and make sure wires and other important stuff is ok before moving on. Next, new tires are going to have to be ordered, and the lug nuts re-torqued properly. And that is all, for now, because it's been a really stressful day. Life is good, people are still amazing, and thank you, Lord, for watching out for us today and sending us two amazing young men who worked so hard to help us fix our tire.....Time for some wine!

Email ThisBlogThis!Share to TwitterShare to FacebookShare to Pinterest
Labels: Our Lady of Guadeloupe Monastery, The Abbey Roast coffee, tire blowout